We found 1 Reddit comments about The Neoconservative Revolution: Jewish Intellectuals and the Shaping of Public Policy. Here are the top ones, ranked by their Reddit score. 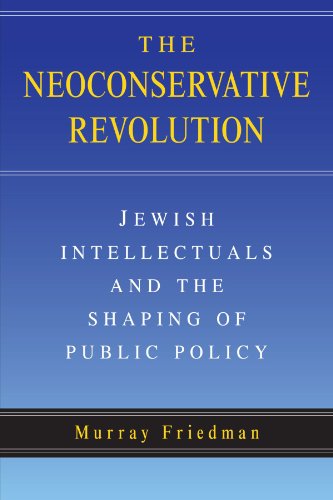 -Fiscal responsibility. Of course, neocons aren't actually fiscally conservative in practice, they have no opposition to Ponzi schemes like Social Security which take from the youngest most indebted generation to give it the oldest generations that lived in the time of greatest economic opportunity. Nor do they oppose economically protectionist tariffs, nor do they oppose wealth redistribution. Because neoconservatism is not about ensuring the success of the American economy, they only care about it as a means to the ends of their foreign policy.
-Militarism. Trump accurately identified the founding principle of neoconservatism, which is a policy of overwhelming strength sprinkled in with a seasoning of Jingoism (interventionism.) Now, this is probably going to send a bit offensive to some people but I urge you to withhold your outrage until you've actually finished reading my post: neocons care about the military as a means to an end, and that end is protecting Israel. Some of the people that might read this will probably think, woah what does this guy have against Jews- nothing, in fact Ashkenazi Jews are the most intelligent ethnic group on Earth so I do not consider their successes a result of some global conspiracy, nor do I think Jews are inherently cursed by some sort of deceitfulness. No, in fact, people who ascribe some global Jewish cabal to the fact that Jews care about Israel are ignoring the basic fact that you do not need an immensely complicated and powerful secret organization to get people to act in their own self-interest, and it if I was Jewish who had family in Israel and a strong attachment to Jerusalem you would not need to force me to care about Israel; I am a libertarian, if I had significant power in the media, no one would have to coerce me into promoting the values I hold. The true core principle of neoconservatism is to protect Israel, which sounds like anti-Jewish propaganda until you realize that the founders of neoconservatives were anti-Stalinist leftists who wanted a strong military, and that "Many early neoconservative thinkers were Zionist and published articles in Commentary, published by the American Jewish Committee." Oh wow, that have been written by a Nazi, well actually that information is based on the book I will link below this paragraph which was written by a Jew who was the Middle-Atlantic Regional Director of the American Jewish Committee and Director of the Myer and Rosaline Feinstein Center for American Jewish History at Temple University.
http://www.amazon.com/The-Neoconservative-Revolution-Intellectuals-Shaping/dp/0521545013

Most neoconservatives were just leftists, often Zionists, that didn't like communists (specifically after the beginning of anti-Jewish policies in places like the Soviet Union) and basically took their leftism + militarism, gave it a coat of paint, voila neoconservatism. Neoconservatives, having formed essentially for the sole purpose of being leftism + militarism, have no fundamental differences to Democrats on economic policy (neocons are supply-siders when Democrats pass spending for their constituents, and Keynesians as soon as military spending is mentioned), they have no principled opposition to the left's abandoning of Federalism and states' rights. Leftists who did not oppose interventionism needed a school of thought to promote their interests, and that party is neoconservatism.

These are the main goals of neoconservatism, and before listing them I am going to encourage you to think each one of these policies in relation to their maximum benefit to Israel vs. America, put simply, is each one of these policies more important to the interests of Israel or to America: promotion of democracy in the Middle East, buildup of American military force and presence globally, and a readiness to use military force.

Since the U.S. is well-insulated by two oceans from post potential threats, the massive costs of our military presence isn't really helping us. In fact, our interventionism has won us a variety of enemies, and our support of Saudi Arabia and occupation of holy lands (Saudi Arabia) is part of the reason the U.S. is more hated by Arab Muslims than Switzerland, Switzerland being a non-interventionist example of a nation with roughly the same freedoms. However, our destabilizing of secular dictatorships in the middle east has eliminated a potential threat to Israeli interests, while we did not achieve democracy we certainly achieved the goal of preventing any potential foe in the region from presenting a serious and organized threat to Israel. So, we've spent billions, created enemies, and on the bright side Israel seems to be a bit safer. This is not a policy that would be supported by people whose primary interest was protecting America, which is the stated justification for these policies.

Of course, he didn't describe paleoconservatism, because paleocons are basically libertarians that are unabashed in their pride for the Western World's achievements in, for example, achieving freedom of speech, freedom of assembly, separation of church and state, separation of economy and state (we almost had that for a while), actually ENDING slavery (everyone did it up until that point, the West was the first to stop it, and in fact went on a moral crusade to end it internationally), and anyone who talks about these things in the media will be painted as fundamentally evil.