We found 11 Reddit comments about The Portable Nietzsche (Portable Library). Here are the top ones, ranked by their Reddit score. 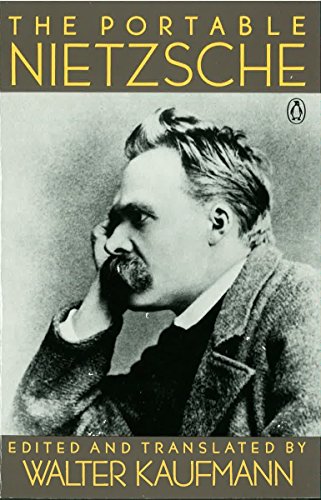 For Nietzsche, or for life in general?

I'll assume the first one. Read these in the order given:

On the Genealogy of Morals, Friedrich Nietzsche

I would highly recommend getting the Kaufman translations. Thus Spake Zarathustra is collected in The Portable Nietzsche and Genealogy of Morals is collected together with Ecce Homo. Once you've read the ones I've listed, you'll already have his other important books if you want to read them. I'd read the Kaufman book first for two reasons: Understanding Nietzsche life and times helps to contextualize his philosophy, and Kaufman is terrific biographer, plus Kaufman gives a thorough overview of Nietzsche's ideas. And sometime it really helps to have a map of the territory before you plunge into the abyss. Nietzsche can be very challenging, especially to the 21st century reader.

It used to be standard practice to buy the following two volumes ed. and trans. by Kaufmann:

Together, they contain almost all of Nietzsche's works.

Edit: Notable absences are The Gay Science and Will to Power.

The Portable Nietzsche
Contains '...complete and unabridged texts of Nietzsche's four major works: "Twilight of the Idols", "The Antichrist", "Nietzsche Contra Wagner" and "Thus Spoke Zarathustra". In addition, Kaufmann brings together selections from his other books, notes, and letters, to give a full picture of Nietzsche's development, versatility, and inexhaustibility.'

these should keep you going for a bit :), sorry (sorry for saying sorry) about the delay, been a bit too busy to reddit. :) enjoy!

Translations to english: anything by Walter Kaufmann, and/or R. J. Hollingdale. Those two cats are your best bets as far as I know (with a strong preference towards Kaufmann).

As for read order: I would imagine that Beyond Good and Evil will get you the most mileage. It is an attempt at expressing the philosophy drawn out in Thus Spoke Zarathustra, but without the parable-type format that nowadays is a bit obnoxious.

Next, I would suggest reading The Gay Science, and possibly snatching up a copy of The Portable Nietzsche.

I am not of the opinion that going over Nietzsche's works in chronological order before you're into the way he operates really is the most user-friendly way of exploring his ideas--if you hold yourself strictly to something like that, you may get turned off early and never get to the some of the best stuff... but don't take my word for it!

I was interested in the following with regards to my Nietzche reading.

As for the religious stuff, I'm actually agnostic, it's just that religion and theology have always sort of fascinated me. I plan on reading St. Augustine's Confessions and City of God.

Honestly, the hardest part of him is where to start. Ask five people and you'll get six answers.

But as a general recommendation, stick primarily to Walter Kaufmann's books, and you can't go wrong. He was one of the leading scholars on the school of his thought, and I find his translations of Nietzsche to capture the dramatic emphasis of his prose the best.

For a brief introduction I'd start with his Biography by Kaufmann, this is useful for understanding the time in which he lived, the philosophical climate, and debunking myths about him, followed by Basic Writings, and then The Portable Nietzsche which contains his more complex works, Twilight and Zarathustra. Each of these contain complete texts, as well as discussion and expositions to give them more context, and are extremely helpful in understanding the work.

Also, If you're a materialist already, an Atheist or an agnostic, start with The Antichrist and you'll fall in love with him in the first pages. Its a summary of his view on Christian morality, and it doesn't hold back at all, a quick read at about a hundred or so pages. If you want an appetizer, peruse The Will To Power, his book of aphorisms, to whet your palate (this is also where most of the romance quotes live). These were my introductions, and I never looked back.

Try The Portable Nietzsche, it's basically an overview of what he wrote, with four unabridged works, and excerpts from the rest.

You can also find The Antichrist online for free, it's one of his polemics against Christianity.