We found 11 Reddit comments about The Post-American World. Here are the top ones, ranked by their Reddit score. 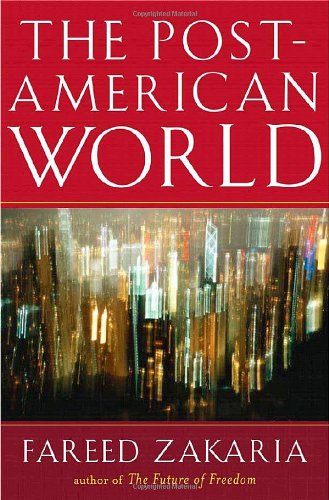 Author of "The Future of Freedom"
Check price on Amazon

Here is what I don't like about this comment: It is an oversimplification of the trends around the entire world. China is growing as an economic powerhouse, but it is not going to REPLACE the United States as the world's foremost superpower! For more insight into this, I would recommend The Post American World by Fareed Zakaria ( http://www.amazon.com/The-Post-American-World-Fareed-Zakaria/dp/039306235X ). What he explains in this book is that America is not IN DECLINE. It is just that the rest of the world is catching up. In this world, America is not the ONLY superpower in the world. Hence, it is called the Post-American world!
Also, there is a lot of things that China has to overcome before it can become a superpower. For example, it needs allies. Even though China has a lot of economic alliances with other countries around the globe, its influence is making its neighbors weary. For example, South Korea, Japan, and even VIETNAM are starting to have closer ties to the only other country with major pacific influence: the United States. There is a great article talking about America's influence in the pacific ( http://www.foreignpolicy.com/articles/2011/10/11/americas_pacific_century?page=full ). Think about this: if Vietnam is becoming allies with the country that used to bomb its own people, you know you messed up (in China's case, it happened with with the South China Sea problem). China's navy is also dwarfed by that of the United States (http://en.wikipedia.org/wiki/Number_of_warships_in_service_worldwide) This is key in power projection in the pacific, because the country with the more power in the seas gets to dictate the rules (up to an extent, of course). China tried to exert its power in the South China Sea, so countries like Vietnam and the Philippines asked the U.S. for more naval support. This has put China in a spot where it can't dictate the rules to the smaller nations.
Another thing that China has to fix is the problems with its economy. Just like the United States, it has a considerably debt problem. Even though the public debt is lower than that of the United States, China has a TON of major state-owned companies. The debts that these state owned companies have make China's national debt as a percentage of its GDP much higher than that of the United States ( http://www.creditwritedowns.com/2011/09/jim-chanos-china-has-tons-of-contingent-debt-via-state-owned-enterprises.html )! China also has a problem with making ghost-cities. China is building a lot of buildings that aren't even inhabited. Some people are even saying that this is a housing bubble that may burst (here is a great video on this: http://www.youtube.com/watch?v=pbDeS_mXMnM ).
Another problem that China faces in the future is its aging population. This problem is its aging population( http://www.guardian.co.uk/world/2012/mar/20/china-next-generation-ageing-population). China's population is getting progressively older, which may cause a slowdown for its economy. This has already happened in Japan, which has partly caused the slowdown in its economy. This is happening in European countries as well (like Germany). What makes the United States so different? Immigration! Immigration is the thing that makes America so unique, and will continue to make America a vibrant place ( http://globalpublicsquare.blogs.cnn.com/2012/06/29/a-reason-to-be-optimistic-in-todays-economy/ )
Don't get me wrong, China will have the world's largest GDP by 2030, ( http://www.worldbank.org/content/dam/Worldbank/document/China-2030-complete.pdf) according to the World Bank. However, its GDP per capita is considerably smaller than that of the United States ( http://en.wikipedia.org/wiki/List_of_countries_by_GDP_(PPP)_per_capita ). On top of this, the United State's hdi is pretty high, which means that its standard of living is high as well: (http://en.wikipedia.org/wiki/List_of_countries_by_HDI). Therefore, what we can see is that China will have to catch up A LOT if it wants to surpass the United States of America (fuck yeah).

On top of ALL THAT, China is facing internal troubles. This comes mainly from the control that the government has, from press censorship to the state-owned companies. With a more liberalized economy, the citizens of China will want more freedoms as well. This may cause some trouble in the future for China as well. We can see more of this happening right now! In fact, there are over 100,000 protests in China EACH YEAR (http://www.telegraph.co.uk/news/worldnews/asia/china/6636631/Chinas-middle-class-rise-up-in-environmental-protest.html)!

I talked about all the problems of China, but not what is good about it. What is awesome about China? Its economy is growing currently at a rapid pace, taking millions of citizens out of poverty! Its military is getting increasingly powerful, with only a couple countries that can match its firepower (USA and Russia). As a result, it can get more of what it wants. On top of this, many countries want to have increased ECONOMIC ties with China, as the rise of China will help the other countries as well.

What should the U.S. do if it wants to remain as a superpower? It should find ways to reboot its sluggish economy, increase friendly relations with nations around the globe, become more immigration friendly, boost manufacturing, focus more on education, etc. There is A LOT for the USA to improve on, but it isn't necessarily in a position where it will lose its superpower status at the moment.

TL;DR: I got butthurt by your comment. Is China an economic powerhouse with increasing political influence around the entire globe? Yes! Will China replace the United States as a superpower? No! There are many challenges that China has to face if it ever wants to dream of getting to the superpower status.

&gt;"This is not a book about the decline of America, but rather about the rise of everyone else." So begins Fareed Zakaria's important new work on the era we are now entering.

&gt;The tallest buildings, biggest dams, largest-selling movies, and most advanced cell phones are all being built outside the United States. This economic growth is producing political confidence, national pride, and potentially international problems. How should the United States understand and thrive in this rapidly changing international climate?


This sounds like an interesting book examining the differences between world-wide problems and nation-wide problems, and how American's indifference and resistance to social progress, economical progress, technology, and tolerance for monopolies and anti-competitive behaviour from large companies is destroying America's crazy idea about 'best country evar'.

Smart man, I read his book. Of course his choice to appear on that hack Leno's show second fiddle to the Kardashian sisters may have lost him a couple of points in my eyes.

Fareed Zakaria discusses that subject it his Post American World.

He discussed that while that is indeed true, the US produces better quality engineers.

i hope you sent every person on that chain a link to amazon so they can see what the book's about.

not that it should matter...

Because Amazon.com is harrrrd to use...

“This is not a book about the decline of America, but rather about the rise of everyone else.” So begins Fareed Zakaria’s blockbusting bestseller on the United States in the twenty-first century. How can Americans understand this rapidly changing international climate, and how might the nation continue to thrive in a truly global era? Zakaria answers these questions with his customary lucidity, insight, and imagination. - dust jacket quote

The economic crash of late 2008 may have rendered and lot of this book obsolete.

The Post-American World, here for purchase.