We found 15 Reddit comments about The Silmarillion. Here are the top ones, ranked by their Reddit score. 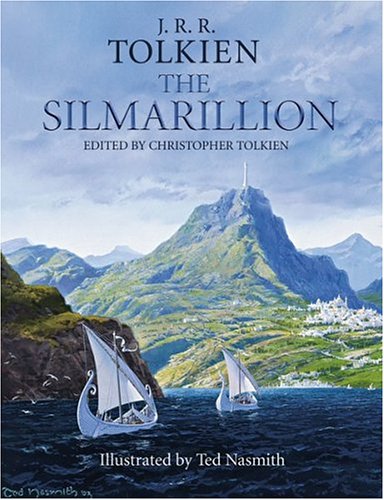 I have a version of The Silmarillion illustrated by him with big glossy pages, and it's quite nice work.

I loved it when the XBOX came out, I would go to EB or Gamestop and pick up madden 98 or top gear rally 2 or 007 The World is Not Enough for $3 each for N64. The really good games were $10. I would normally walk out of the store having spent the $20 I saved from selling lemonade and cookies with 5-8 games, happy as can be. (In later years I would by chance stumble upon a $5 used copy of Conker's Bad Fur Day at a garage sale and realize that there is a God, and he is a gamer.)

Oh yeah and I played them on the N64 that was bundled with pokemon stadium for $130 from walmart that my sister and I split the cost of. I had never played the Game Boy versions because I couldnt afford them after buying a GBA. I only played the card game. But then I traded my Matt Hoffman's Pro BMX 2 (it's dumb because in order to unlock levels, you had to complete every single challenge, and one of the challenges on the third level was impossible) for a Kirby Nightmare in Dreamland game and it was awesome!

Unfortunately once [puberty] hit, I could no longer make rational decisions with my money. I wish my parents had made me put it all in savings. I spent $80 on a Gamecube after the XBOX came out and bought Metroid Prime for $30. At least I got Wind Waker though... it was the first Zelda I actually played all the way through (I was too young to finish Ocarina when I got it, and I couldn't start Majora's until I finished OOT) Then my parents got a Wii and I don't know what to do with my gamecube (I got one of the silver ones that could output HD). I don't want to smash it, but I don't have any use for it either. And I can't sell it for more than $5. I still use the controllers, but the lunchbox is just a mantle piece. Maybe I'll make a post asking what I should do with my gamecube so people can respond with links of things other people did with their gamecubes.

I remember when the popularity of the Gamecube was waning significantly and they released an adapter to let you play GBA games on it. Same time Wario Ware came out (I remember, I was a kid toy tester for FamilyFun magazine). Then that stupid e-Reader attachment for GBA that I bought for $40 because it was so cool that it could read NES games from cards. After the GBS SP came out they re-released a Link to the Past with a bonus game called four swords adventures. That game provided me with the best co-op I've ever experienced in a game. I would plug in by GBA to my friends' on the bus ride to school and we would solve puzzles together or race ([email protected]). Before Wi-Fi.

Back when Backyard Sports were popular and Pablo Sanchez was first pick over Randy Johnson. When my parents were hesitant to allow me to play Lord of The Rings Two Towers on my Game Boy after having read the LOTR books with my dad (including the Silmarillion [the Hobbit cartoon movie remains to this day one of my top ten movies of all time]), building a robotic orc out of K'nex for my 4th grade book report, and getting the Full Screen Collector's Edition DVD Box Set. When the G4 Cube was being praised on TV and I was the only kid in my state to have an iPod 10GB. When I would get off the bus at my friend's house to play a few minutes of Grand Theft Auto: Vice City on his PS2 or Duck Hunt before I would have to go to hockey practice.

Back when D.A.R.E. was the best class because we actually learned about cool stuff in it (like ecstacy, raves [the cop told us people would dress up like pikachu and party all night long to trance. He told us how to spot good E from stuff that was mostly or all meth. Then he told us that we would get holes in our brains if we tried it just once. cool] and different forms of advertising [he never really talked about weed as far as I can remember]) and got to have a DARE party out on the soccer field with water balloon contests while singing along to "The Anthem" and "Lifestyles of the Rich and Famous" and discussing the irony of the latter song while the DJ told us to get in a conga line.

...Back when my dad bought the first quad core 64-bit computer for $3000 to be ahead of the curve and play Halo in 1080p online and never finish Myst 3 Exile, only to become obsolete within 2 years. I swear I was one of the best Halo PC players when I was 11. But I remember when I bought the original MacBook Pro 1.83GHz Core Duo (that I'm typing on right now) and played Halo a few nights a week with my dad online before he got consumed by work and depression.

Back when I had a in-school relationships, like the one with the cute girl from art class in 7th grade and would sneak out during library time to make out. When I won a pair of Jessica Simpson tickets in a raffle at my local supermarket to see her sing in front on the Foxtrot Mall in Massachusetts when she had one popular song because she was featured in NOW 5 alongside Aaron Carter, boybands soulDecision Backstreet Boys and N'SYNC, Britney and this &lt; this is a very different song than the Wal*Mart version I got.

tl;dr: i bought used n64 games at gamestop for $3, then i reminisce about the early 2000's, including way too many links that took me hours to find. sorry for block of text.

Gandalf is a straight up badass. I would encourage you to go back and read [The Silmarillion] (http://www.amazon.com/The-Silmarillion-J-R-R-Tolkien/dp/0618391118/ref=sr_1_1?ie=UTF8&amp;amp;qid=1373920830&amp;amp;sr=8-1&amp;amp;keywords=silmarillion) as well as the [History of Middle Earth Volumes] (http://www.amazon.com/The-Histories-Middle-Earth-Volumes/dp/0345466454/ref=sr_1_1?ie=UTF8&amp;amp;qid=1373920796&amp;amp;sr=8-1&amp;amp;keywords=the+history+of+middle+earth) to get a better understanding of the background of the entire world. It's by no means easy reading, and it's very in-depth and very dense, but it gives you a deeper understanding and appreciation for the world which Tolkien had created.

The edition you're looking for is out of print. You can still get it second hand on amazon though, but it's 79dollar. The illustration is by Ted Nasmith. There is also a "blue version" which is still available new.

Here is an amazon link to your red edition:

I can't speak to hardcover editions of LotR as I still haven't committed to those myself, but I would recommend that whatever version you get, get an ebook version too - being able to search the text is absolutely wonderful, particularly if you also have a copy of The Complete Guide To Middle Earth by Robert Foster.

As an aside, this version of the Silmarillion is very nice.

My fellow redditor, you have come to right place. Welcome to this dwelling of the Tolkien true collectors.

I write in haste so forgive the lack of details in this humble and sincere post.

The LOTR Hardcover on the link posted and provided in your above post is a perfectly and flawlessly wonderful match for the following:

Beware! The Hobbit version has been reprinted several times and only some of the printings are a full and perfect and flawless match for the aforementioned beautiful LOTR set.

If you obtain the correct and perfect versions of each, your collection would look exactly similar to the following picture / image, with the sole difference that they are all HM or HMH books: https://www.google.com/url?sa=i&amp;amp;rct=j&amp;amp;q=&amp;amp;esrc=s&amp;amp;source=images&amp;amp;cd=&amp;amp;cad=rja&amp;amp;uact=8&amp;amp;ved=0ahUKEwjPg83viIjOAhUNBh4KHTweDQEQjRwIBw&amp;amp;url=http%3A%2F%2Fwww.gamefaqs.com%2Fboards%2F211-lord-of-the-rings%2F62025619&amp;amp;psig=AFQjCNF1C7dEPIF962Vt5SJRcBXvANsDJg&amp;amp;ust=1469311187738414

Vital and relevant Note: all from publisher HMH.

If what you wish my friend is to have a full and complete collection of matching books, it would be highly beneficial if you were to take a look at the Tolkien Official website: http://www.tolkien.co.uk/index.html

OPTION 2: Another alternative is to purchase the Deluxe editions: https://www.google.com/url?sa=i&amp;amp;rct=j&amp;amp;q=&amp;amp;esrc=s&amp;amp;source=images&amp;amp;cd=&amp;amp;cad=rja&amp;amp;uact=8&amp;amp;ved=0ahUKEwjOw5XEh4jOAhXGHB4KHSy6DFQQjRwIBw&amp;amp;url=https%3A%2F%2Fatolkienistperspective.wordpress.com%2F2013%2F09%2F07%2Fmy-tolkien-collection-deluxe-editions%2F&amp;amp;bvm=bv.127984354,d.dmo&amp;amp;psig=AFQjCNEe2eUry_XNQjxuFR_GP4HQmnl4-g&amp;amp;ust=1469310826201755

OPTION 3: Finally, if paperbacks is what you seek, you could potentially purchase the paperback collection: https://www.reddit.com/r/tolkienbooks/comments/4qwnm8/my_paperback_collection/

And here's the ISBN in case you want to look for it from another source:

The Art of The Lord of the Rings

The Art of The Hobbit

The Hobbit illustrated by Jemima Catlin

Lord of the Rings illustrated by Alan Lee

The Hobbit illustrated by Alan Lee

The Silmarillion illustrated by Ted Nasmith

that's a good one, here's my favorite.

Depending on her level of interest, I'd suggest this hardcover copy of the Silmarillion
https://www.amazon.com/dp/0618391118/ref=cm_sw_r_cp_apa_hiaAxbKMBPCHR

Even if she has one already, this one comes with a ton of illustrated pages; it's absolutely beautiful. Personally, I like to own hardcover editions of my favorite books.

houghton mifflin 80s hardcover set (had my eye on these for Years and my gf bought me the box set for my bday, more heart eyes) $38 on amazon rn (apparently there's a hobbit hardcover that matches these? i need it)

there's a really nice big coffee table-ish hardcover of the silmarillion with lots of illustrations by ted nasmith. it's huge though (almost as big as TWOIAF) and surprisingly heavy and I don't think I actually have a way to comfortably read it right now? ymmv though

This is not really similar to Anathem but have you read J.R.R. Tolkien's The Silmarillion?

I bought the bottom books within the past year, all on the internet (Amazon and Books a Million).