We found 28 Reddit comments about The Sky: The Art of Final Fantasy Slipcased Edition. Here are the top ones, ranked by their Reddit score. 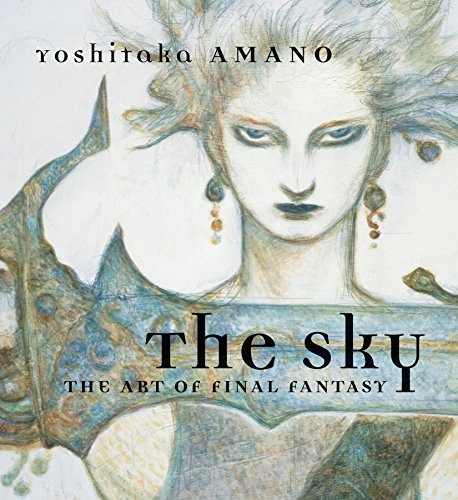 28 Reddit comments about The Sky: The Art of Final Fantasy Slipcased Edition:

I pulled inspiration for this piece from Amano's work in this book set. It has a lot of his work from FFI-FFX!

I highly recommend people check this out.

The IX section really impressed me. I expected a lot smaller section than what it ended up having.

is one of the best purchases i have ever made.

Amano is one of my favorite artists. Love his work.

A while back these were produced in limited quantities and sold for ridiculous amounts on eBay, but they have been re-issued due to popular demand by Dark Horse.

The boxed set features 3 books full of Yoshitaka Amano's concept art spanning from FF to FFX. These books are HUGE, and have a lot of art I've never seen before. If you are a fan of Amano's artwork, this is a MUST BUY, great addition to any FF collection. The pages are high quality and it makes the art look better than ever before. And the best part of all, it is only $56.30 on amazon.

Mine just came in the mail today. So worth it.

This probably isn't what you are looking for, but is the closest to what I know might be.

I picked this up a few years ago, The Sky. It is three art books on Amano's art for the Final Fantasy series. Even if you don't have it there is a chance you've seen decent chunk of this. Skimming through it I'm not seeing anything describing his process or interviews. It is largely just concept art for the games.

However, what it does have is a chronological order of his Final Fantasy art from 1987. So you might be able to use it as a collected grouping of his art to see his evolution over the decades. At least as far as Final Fantasy is conerned. n

The NES era, volume 1, looks to be mostly just the occaisonal scene, but mostly the final drawn art pre-Pixel conversion.

Volume 2 is the SNES era. As it progesses it begins including more varied stuff. Some serious drawings, some silly little asides.

Volume 3, the 3D era up to FF10 is different. Less art per game, but looks to be earlier in the process stuff than the previous two volumes. More "drafty" for lack of a better word. Stuff like this where Aerith looks more like Celes. A noticeable amount of pages where the same drawing is shown in different Colors. Three variations of this are in this volume scattered about.

As a layman, it seems the three volumes are:

I am a huge Final Fantasy fan and although my girlfriend is familiar with the series, she is not as passionate about the games as I am. However, for Christmas last year she got me a Final Fantasy Artbook called The Sky. It features breathtaking art that is instantly recognizable to any Final Fantasy fan. You also will not need to know which games are his favorite because the book features artwork from most of the main games in the series. So no matter what he will be happy. I was ecstatic Christmas day last year when my girlfriend got this for me and I'm sure your boyfriend would be as well. If it is too late for you to order online I have seen it in stock at my local Barnes and Noble.


I hope this helps! Good luck!

Anything from Yoshitaka Amano (Final Fantasy and Vampire Hunter D illustrator, among others). All of the Final Fantasy compilations are good and I would recommend the Art of Metal Gear Solid I-IV book as well.

This one is up for pre-order of you like pixel art
FF DOT: The Pixel Art of Final Fantasy https://www.amazon.com/dp/1506713521/ref=cm_sw_r_cp_apa_i_nnRPDbPFQ1KJK

Definitely FFVII then! If you want something fancier, there are replica Buster swords and Play Arts figures--Cloud and Sephiroth are the anchor characters and probably the safest bets. This art book is gorgeous if you think he might be into that, but it's not FFVII exclusive. This print set is cute, too. Or there's the Static Art Minis of Cloud, Sephiroth, and Tifa.

There's probably a bunch of soundtracks &amp; such out there too, but I'm not too familiar with those.

Amazon It's back up to $80CAD now, but CamelCamelCamel shows it at $60 for a couple years. Just gotta hope for a sale now.

Which book is it? I've been thinking of picking up The Sky to have something to thumb through, every now and again.

Edit: I may have answered my own question, because I can't find another one... haha.

A few years ago, I bought this Yoshitaka Amano book of his Final Fantasy character designs. Totally worth it.

Lmao! Fair enough. As an anime fan I do prefer Nomura's style. But I DEFINITELY appreciate Amano's work &amp; even own The Sky Box set of art books.

I think it's this one, I honestly can't remember because it was really recent and I let a friend borrow it. This comment actually reminded me that I have to ask for it back :P

Edit: Wait nope, it's this one

I have it and it's wonderful

I bought a copy off amazon when it released last year. It is really great. Great production value and product.

I decided to pass on the CE edition and get the digital download + Amano's new Final Fantasy Collection book that's being rereleased in August: http://www.amazon.com/The-Sky-Fantasy-Slipcased-Edition/dp/1616551607/ref=sr_1_1?ie=UTF8&amp;amp;qid=1372817252&amp;amp;sr=8-1&amp;amp;keywords=the+sky

A good alternative for those who missed out on the CE.

Glad to hear it's selling well though!

Yoshitaka Amano put out a collection a few years back called The Sky. There are a few I saw at AX2014, though I can't recall the title of them. They tried to sell them to my $80 USD a piece, even thought they were only worth about $50 USD (4700Y) including import fees.

I bought that for my best friend for his birthday and he about shit himself. It is a beautiful collection. I own one myself as well.

Also, look at The Sky. It's absolutely massive and covers nearly all of Amano's art for the series, and it's retailing for $50.

It's true that some artbooks get expensive, but typically those are imports, very niche, or are out-of-print.

Oh no, that sounds like The Sky, which you should be able to find for much cheaper, though coming from someone who collects artbooks of all kinds (and loves Final fantasy), it's priceless. But on Canadian Amazon it's about $20 to $30 cheaper and worth every penny.

Like others have said, it really depends on what you plan on buying. Besides one or two convention exclusives, I never have a set idea of what I'm buying while I'm on the floor. If something catches my interest, I'll scope out the price and make decision.

As far as how fair the pricing is, I've gotten some moderately generous deals before. I ended up buying The Sky: The Art of Final Fantasy from some shady-looking dude on the floor for $10 less than its asking price, a week or so before it hit the market. I've also been able to buy some vintage PS2/GameCube games at half their normal eBay or Amazon costs. Just take a good look at all the smaller, niche booths. You can sometimes find gold.

If theres one for FF6 that doesn't include artwork from The Sky, then I'd get one.