Reddit reviews The Small-Scale Poultry Flock: An All-Natural Approach to Raising Chickens and Other Fowl for Home and Market Growers

We found 2 Reddit comments about The Small-Scale Poultry Flock: An All-Natural Approach to Raising Chickens and Other Fowl for Home and Market Growers. Here are the top ones, ranked by their Reddit score. 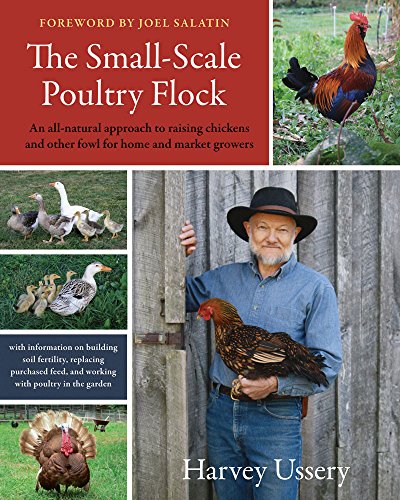 This encyclopedic guide offers extensive information on raising chickens and other domestic fowl based entirely on natural systemsNo other book on poultry takes an entirely whole-systems approach!Ussery, 8"x10", 394 pp.
Check price on Amazon

2 Reddit comments about The Small-Scale Poultry Flock: An All-Natural Approach to Raising Chickens and Other Fowl for Home and Market Growers:

I didn't read it as you condescending. Sorry about your loss. We have a similar setup and I hope to leave it to one of my kids too. I look forward to the long version of your story. You may not have had an easy childhood, but you learned at a young age to work hard and you got a lot more character from that farm than you ever would have going to church.

I have a few things I want to share with you since I was raised on a farm too, but have recently learned of better ways to do things. Watch Back to Eden for a different way to garden and orchard. We're doing it and it works great. Gaia's Garden is a great book about companion planting, particularly in orchards. Sorry it's a book that you would have to order, but it's worth the read. It's not your guys fault you lost your trees, but with these techniques they might have survived. The American Corporate Aggriculture Monoculture is about the most unhealthy and unatural way to farm. Polycultures promotes healthy organisms; both vegitative and animal. While many people like Joel Salatin's Polyface Farms, I enjoyed implementing the animal polyculture I learned reading Harvey Ussery's The Small Scale Poultry Flock. Anyway, I really enjoyed learning about all this stuff and if you have the time to look into these references I'm sure you will too.

I personally like Barred Rocks better than any other heritage layer, but I wouldn't say they're exactly flashy. Really, to me, hens aren't that flashy in general. Flash is the rooster's realm of expertise. Might try grabbing a Silkie or a Polish if you want something more exotic, but they aren't the greatest layers in the world. If you're doing an urban flock and you want something docile that lays well, get a production breed (don't know any off the top of my head; anyone want to chime in on good production breeds?). I free range, so I like heritage breeds which are better at fending for themselves and running from predators.

To me, THE definitive resource to look at is The Small Scale Poultry Flock by Harvey Ussery.