Reddit reviews The System: The Glory and Scandal of Big-Time College Football

We found 10 Reddit comments about The System: The Glory and Scandal of Big-Time College Football. Here are the top ones, ranked by their Reddit score. 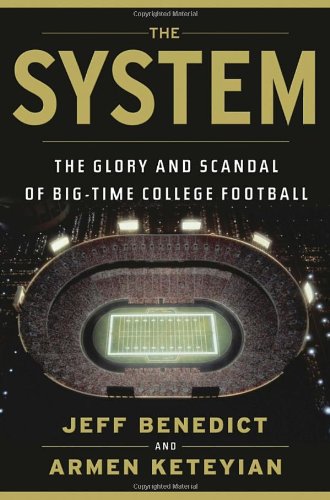 10 Reddit comments about The System: The Glory and Scandal of Big-Time College Football:

There was a whole chapter about them specifically under Kiffin's tenure in The System. It was... eye-opening.

Anecdotal estimate on my part, I worked for the football stadium in 2004-2006 and I overheard one of the higher ups walking a guy through all the revenue streams. I seem to recall it was in the $4M-$5M range per game. So with 6 home games that's about $25M-$35M a season. BYU Basketball is probably 20% of that. TV deals and sponsorships are probably worth another $10M-$30M. So I could see the total revenue for school sports at around $75M. I could be way off and my data is 10 years old so it's probably over $100M. There is also money that comes from boosters etc because of the team, which is probably one of the main sources for the school.

Conference affiliation would be worth double that for the cougars at least. All that being said Jeff Benedict writes about this very topic in his book: The System and Scandal of Big Time College Football. The thing is, most programs run in the red. It's a pipe dream that too many try to live.
https://www.amazon.com/System-Scandal-Big-Time-College-Football/dp/0385536615

This is discussed in to GREAT detail in "The System". The book was released last year right before my trip to Ohio State. It is a must read for any CFB fan. So many great stories covering many programs, coaches, players, and stories. It goes in to great depth on recruiting players and coaches, cheating, training, traveling, AD's - all aspects of the game. Over 300 taped interviews if I remember went in to that book.

There is a couple chapters throughout the book on Leach's move from TTU to WSU including the James debacle.

Are cool reads on the subject

&gt; Why are we being matched up against a glorified high school? CFB doesn't make sense to me either.

Because the larger schools pay smaller programs to play them for easy wins/big point spreads. Its shady as fuck because College Football is shady as fuck.

Schools have recruit programs where they essentially whore out Co-Eds to get students to commit, will do anything they can to cover up rape/sexual assault cases, and other awful shit. I recommend reading The System.

Well I'll preface this by saying that 1) I don't have the exact figures (I doubt any people not involved with the NCAA do...), and 2) the term "student athletes" encompasses all manner of athletes from cross country runners to rowers to football players. If you sub-divide it out by sport affiliation, it probably skews different, and in that regard you'd probably see football and basketball players tend to be arrested more often than ordinary students. (At least if you're talking about the top-tier programs, which are typically attached to top-tier universities.) There are some stats to this end in Jeff Benedict's "The System," which /u/RobertNeyland's mentioned.

Maybe someone with more time can track down arrest rates for all athletes, and we can cross-check rates against general student body rates.

Not based on an individual team but well worth the read.

not nfl, but i liked this one about cfb:

I hear you. I remember reading this article when it first came out. It hurt my soul. I've known about a lot of corruption in the NCAA. My friend worked for the UT band for several years, and I have friends that work for various NFL teams. They've all told me real stories of various players being protected. I hate it. I LOVE college football. Just LOVE it. I obsess over it. I'm an Ohio State alum, and I spend my whole weekend watching games during the season. But the NCAA is so corrupt... I hate it. I do have trouble reconciling it at times. I keep hoping that it's going to get cleaned up, but I just don't know. I am happy that Ohio State has learned from their past mistakes, and are disciplining our players firmly. That's the best I can hope for. If they weren't, then I wouldn't be rooting for them so much. Urban Meyers did not do that at Florida. I was really afraid of how he'd handle players actions at Ohio State. He's changed. He's stepped up and he's holding them accountable. I'm happy about that. Have you read [The System] (http://www.amazon.com/The-System-Scandal-Big-Time-Football/dp/0385536615)yet? I want to, but I'm afraid I'll never be able to enjoy college football anymore. Sigh.