We found 12 Reddit comments about The Unlikely Disciple: A Sinner's Semester at America's Holiest University. Here are the top ones, ranked by their Reddit score. 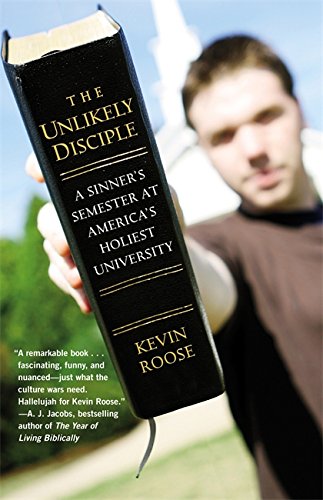 12 Reddit comments about The Unlikely Disciple: A Sinner's Semester at America's Holiest University:

I'd highly recommend Kevin Roose's book The Unlikely Disciple for a fascinating, concise glimpse into Liberty's culture. He was then a Brown University student (ie extremely open-minded "liberal") who did a semester at Liberty out of morbid curiosity. It's a super quick read too!

Edit: I seem to have created a downvote-enemy in this thread. Still cannot recommend the book enough! In the words of LaVar Burton: Don't take my word for it!

hey there. someone already did this a couple of years ago. his name is kevin roose and he now works for the new york times. he published a book called The Unlikely Disciple .

also posting this on reddit and boasting about it is probably not your best idea but have fun!

I read a book about a Brown student who transferred to liberty. He was the last person to interview Jerry Fallwell. It was pretty interesting.

I think most Mormon kids outside of Utah/Idaho/Arizona are more sensitive to these things on balance because they tend to have more friends and acquaintances who are from diverse backgrounds. But not always.

BYU is like Mormonism on crack -- situated right in the middle of Mormon culture -- and exhibits all the worst tendencies, insular viewpoints, and navel gazing that zealously-lived Mormonism can offer.

Be assured that this isn't unique to Mormons or BYU. After reading The Unlikely Disciple: A Sinner's Semester at America's Holiest University, you get the sense that most hardcore religious universities suffer from similar problems.

Hate to break it to you but someone did something similar and wrote a book about it over 10 years ago.

It’s a good read. I actually know some of the guys he lived with while in the dorms. They were juniors and seniors when I was a freshman. This guy actually got to give Dr Falwell his last interview before he died if you can believe that.

The TL/DR version of the book is he basically concludes that Liberty students have the same struggles and same desires as any other college student in America.

I lived in the area and worked with many students. A defiantly not a party school. You can(could) get expected for being caught drinking even off campus and of age. Even being at a party with alcohol would earn you demerits. You can earn demerits by public displays of affection. You had to dress in business attire when I lived in the area but that was relaxed after Jerry's death. While the majority of students were religious several I knew were able to get free rides. Liberty is one of the few private colleges that had 0 debt in part because of a life insurance policy on Falwell. However that and the cult like education allowed the school to have lower rates.

I haven't given a dam about this school since I left Lynchburg however. http://www.amazon.com/The-Unlikely-Disciple-Semester-University/dp/0446178438 is an interesting read.

This book is a pretty amusing (and insightful) read. An agnostic quaker from Brown takes a year "abroad" to go to Liberty University.

In general, I think they sit with their dorm-mates, so there are RAs to keep track of attendance, etc.

A kid from Brown faked being an evangelical Christian to spend a semester there, then wrote a whole book about the experience.

As I recall, in order to get accepted all he had to do was write an essay about how Jesus influenced his life. He bullshitted two pages and got accepted. The actually classes were not so easy he claimed - the religious coursework was especially difficult (though perhaps not so for kids who grew up on it). The online programs however are run exactly like the for-profits colleges (easy, useless, expensive, very profitable).

He also made the place sound very cult-like, though the kids themselves seemed like good people (being taken advantage of). It was a truly fascinating read.

Don't know the name of it. I read about it in this book:

It's briefly mentioned in the summary.

&gt;I'm hoping to hear from others, especially Liberty grads, who have had similar experiences of losing/leaving faith while or shortly after receiving an evangelical Christian education.

Not exactly what you asked, but I really enjoyed the book The Unlikely Disciple: A Sinner's Semester at America's Holiest University by Kevin Roose -- Roose was actually just a college junior at Brown when he decided, instead of doing a semester abroad like many other students, to instead transfer to Liberty university for a semester, even though he wasn't a fundamentalist, as a kind of cultural exchange that he could write about. This wasn't really a de-conversion story, like Dan Barker's Godless, but it still provided an interesting perspective and I won't spoil the last chapter for you but there were some surprises based on what happened while he was there.

I recently read this book for my English Composition class. The Unlikely Disciple

Have you read it? If so, could you give your opinions on it?