We found 13 Reddit comments about The User Illusion: Cutting Consciousness Down to Size (Penguin Press Science). Here are the top ones, ranked by their Reddit score. 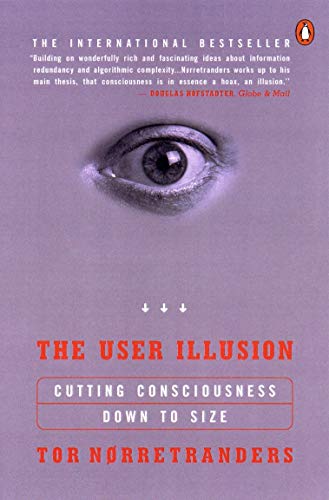 Basically this is where semiotic intersects mathematics and logic. You'll want to look at how mathematics defines functions in terms of set theory and in terms of inference. Probably key is testing your function in terms of mapping. The reason this matters is that it affects causality and inference.

An example in Chinese involves the mapping between hànzì, pinyin and oral Chinese. The only complete and unique form is hànzì. Because the mapping between hànzì --&gt; pinyin are surjective, you can NOT infer the hànzì uniquely from pinyin. Only if the mapping were injective can you make unique and specific inferences but not inversely implicative. You have to have a bijective mapping to move bidirectionally.This impacts inferences about causality of any relationship.

One example is 電 and 店 which BOTH map to the pinyin diàn so if you see or hear "diàn" you can't unique know whether you are hearing "electricity" or "store" (or several other meanings) without more context.

It's this subtlety plus not understanding basic logic that tends to make semiotic hipsters so insufferable and usually wrong about everything they say about semiotics.

The nature of cognition based on what we know about the biology is that there is an inherent and essential mapping between internal model and physical reality that is the basis of cognition. The best brain model is the "instrumental model": reality is perceived through a "soda straw" of the senses with a model of reality created over a lifetime that simulates reality. See Hawkins, Dennett and Norretranders which are backed up by science.

An example of this is the "model" of the color pink. Pink has no physical reality. There is no electromagnetic frequency/wavelength of "pink". Pink is an artifact of cognitive mapping that results when you sense all wavelengths with green missing.

Pink is created by the brain out of thin air as a result of mapping a linear range of of wavelengths to a circular internal model of color. The "circularness" is an artifact of the representation. So the mapping of reality to model (symbol) is inherently injective. The mapping of the model to reality is surjective. Overall the mapping is not bijective.

I think The User Illusion is one of the most fascinating books about this out there.

Our consciousness is a machine rewriting experience into a narrative where we think that the past is the present and that our decisions came before our actions.

all the time bro, You might want to read the user illusion
just know you are not crazy or alone.

If you liked this article, might I suggest a couple books. They literally changed how I see myself and other people. I know people brag about books "changing their life", but these books force you to realize how little control you actually have over your mind, and assess whether that control is actually productive. The subconscious is a fascinating subject.

Good point. Thanks for the pointer, the book looks pretty interesting.

I recommend reading: The User Illusion by Tor Norretranders, Gödel, Escher, Bach by Douglas R. Hofstadter, and I Am a Strange Loop also by Douglas R. Hofstadter for some interesting reading on the subject (Warning: Gödel, Escher, Bach isn't for everyone- it's a bit strange, but I love it). I read a lot of books on science in general and, based on that, it seems like many believe consciousness and also free will is just an illusion. In fact, just a few days ago, physicist Brian Greene sorta-kinda said as much in his AMA - granted, he's talking specifically about free will and not consciousness per se, but I think the two must be very related.

I, too, believe in God and also have a very strong belief in and enthusiasm for science, so this is an especially fascinating question for me.

BTW: if you're interested in the way the brain works in general, I highly recommend How the Mind Works by Steven Pinker.

There's actually a whole lot more to this, some of which is mind-bogglingly counter-intuitive. For a fascinating read, check out The User Illusion by Tor Norretranders. Fair warning: this is a very dense book that covers a lot of topics.

The problem is a self-eclipsing one. It's normal to think you hold all your beliefs for good, logical reasons. It's even normal to be able to come up with some good, logical-sounding reasons when you ask your brain why you believe what you believe.

But those aren't your actual reasons. Dozens, perhaps hundreds of studies have shown that our brains instantly construct post-hoc rationalizations for their beliefs and present them to our consciousness in confidence that they'll be credulously received. The most striking that comes immediately to mind is one referenced in The User Illusion on page 280 (you should be able to see it in the book preview by searching for "corpus callosum").

The User Illusion, or
The first idea would be good places to start.

Read this book a few years back, definitely worth reading if this topic interests you:

The User Illusion: Cutting Consciousness Down to Size

A lot of what he says was explained earlier in this book: http://www.amazon.com/User-Illusion-Cutting-Consciousness-Penguin/dp/0140230122 I suggest you read it.