We found 7 Reddit comments about The Whole Soy Story: The Dark Side of America's Favorite Health Food. Here are the top ones, ranked by their Reddit score. 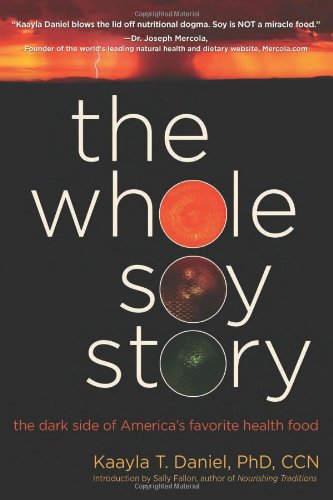 7 Reddit comments about The Whole Soy Story: The Dark Side of America's Favorite Health Food:

You're not alone. Menstrual problems are extremely common in vegetarians, and so are mental health issues. There's plenty of stories similar to yours over at the WAPF, Let Them Eat Meat, and Beyond Vegetarianism. Personally, I gained a whopping 55lbs, developed B12 deficiency (despite taking 1000mcg of methylcobalamin per day), and ended up with a bunch of other nasty things. I'm proud to say that I've lost all of that weight plus seven pounds. (Who would've known a slice of bambi's mom could be so satisfying?)

So, a lot of people have clearly experienced health problems as a result of a vegn diet. Why does the ADA still insist that a "well-planned vegetarian diet" (a clear oxymoron) is healthy and even beneficial? [Seventh-Day Adventists and vegns have so much influence on the ADA to the point that it's rage-inducing.](http://letthemeatmeat.com/tagged/American-Dietetic-Association)

The Vegetarian Myth, The Mood Cure, The Meat Fix, The Ethical Butcher, The Whole Soy Story, and Defending Beef are all worth giving a read. Were you tested for B12, iron, zinc, Vitamin A, Vitamin D, magnesium, and/or iodine deficiency during your vegn years? If you quit recently, it's very likely that you're still deficient in some of these vitamins and will need to supplement for awhile. DHA and EPA are also very important due to how poorly ALA (such as that found in flaxseeds) converts to these essential nutrients.

I was vegan for nearly six years. No cheats. I always had my doubts about it, but getting to learn what other vegns look like was my last call. Just keep in mind that some lifelong meat-eaters will insist that a vegetarian diet is healthier. And some people are really mean.

Do you mean The Whole Soy Story? Seems like an interesting read.

i was told by a nutritionist/personal trainer friend (i was not a client, he had nothing to gain by telling me) that the human body doesn't absorb soy protein unless you do special fermenting stuff to it. also i will link what i just read: [proteins found in soy, may inhibit nonheme iron absorption. If you have iron deficiency or are at high risk of developing iron deficiency, you should avoid eating nonheme iron sources with soy protein.] (http://www.livestrong.com/article/490671-does-soy-protein-interfere-with-iron-absorption/)

let alone the isoflavones in soy that mimic estrogen in your body, which can make you gain weight and may contribute to your odds of getting breast cancer

TLDR: soy is really bad for you

I would highly suggest reading The Whole Soy Story. In short, yes, there is massive evidence against soy for a host of reasons. For a bit of a primer on the book, you can read an interview with the author here. The article does plug a few supplements, and while I do like some of Biotest's supplements, be sure to approach their suggestions with a bit of caution.

The short story is that it should be avoided. There's really no reason to consume soy and there are much better protein sources. The estrogen is really bad for you.

There's a book, The Whole Soy Story, that goes really deep in to it. You will never eat soy again once you read it. Referral free amazon link: http://www.amazon.com/Whole-Soy-Story-Americas-Favorite/dp/0967089751