We found 16 Reddit comments about War Crimes (World of Warcraft). Here are the top ones, ranked by their Reddit score. 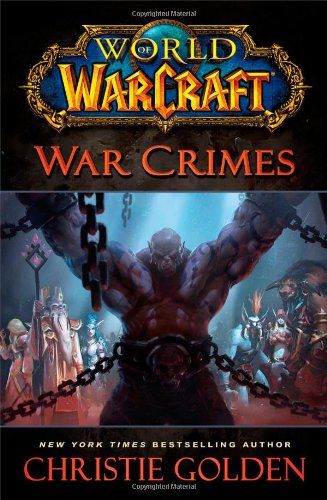 She did after seeing how consumed by hatred that version of her had become (plus kind of you know, nearly dying), during the book War Crimes however i'd say that they took a 'snapshot' of the characters when Hearthstone was released / in production and that's what you see in game.

I'm going to have to disagree, in terms of power I don't think Sylvannas has what it takes to raise Tyr as an undead. He was/is a Titan Watcher after all.

As I remember it (please correct me if I'm wrong) he was empowered by Aggramar, who was Sargeras' Legion fighting buddy. (Thanks /u/whisperingsage). He fought Galakrond the biggest of all proto-Dragons and gave his life to destroy a C'thraxxi. Sylvannas for all she can do is just an elf, She can't even raise normal undead without help.

Besides who could stand against the forsaken / the horde if this DID come to pass? He fought and destroyed a C'thaxxi, Stormwind wouldn't stand a chance.

Edit - My own personal theory about Sylvannas's interrupted ritual is this, She is either : Trying to turn / mind control her two sisters (we were told Aleria is back this expansion) into joining her forsaken. OR she is using power drained from creatures found in the Halls of valor (Val’kyr and the god Odyn) to restore herself back to life. Basically she wants to be with her sisters again. (This one of the major themes in the War Crimes book) The latter option would make for a pretty interesting twist: Does Slyvannas forsake the Forsaken?

There's a whole book written about it, you know.

A lot changes between MoP and WoD in War Crimes. A lot with Jaina especially

If you're interested in learning more about what kinds of things Garrosh did, read War Crimes by Christie Golden.

It's long but you could watch this. https://www.youtube.com/watch?v=P0iKFASurHk

Also if you want to read the books, here is the order in which you should.

[World of Warcraft: Beyond the Dark Portal] (http://www.amazon.com/Beyond-Dark-Portal-World-Warcraft/dp/1416550860)

Warcraft: Of Blood and Honor

[World of Warcraft: Arthas: Rise of the Lich King] (http://www.amazon.com/Christie-Golden-World-Warcraft-Arthas/dp/B00320J28G)

[World of Warcraft: The Shattering: Prelude to Cataclysm] (http://www.amazon.com/World-Warcraft-Shattering-Book-Cataclysm/dp/1439172749)

[World of Warcraft: Thrall: Twilight of the Aspects] (http://www.amazon.com/World-Warcraft-Thrall-Twilight-Aspects/dp/143919663X)

[World of Warcraft: Vol'jin: Shadows of the Horde] (http://www.amazon.com/World-Warcraft-Voljin-Shadows-Horde/dp/1476702977)

It was described in the book "War Crimes".

There is a video synopsis on the book by Nobbel. Contains spoilers (obviously).

The gist of it is that an attack happened before the trial concluded and Wrathion and Kairoz helped Garrosh escape by forming a portal to the past (basically think of it as an alternate reality). The story is pretty good and the book and video are definitely worth it if you enjoy the lore.

Here is the reading guide, in chronological order, of all the books and short stories. Link. There are well over a hundred WoW lore related readings.

Yep. The War Crimes book is a direct bridge from Mists of Pandaria to Warlords of Draenor. It's a pretty solid read.

For immediate WoD lore and back story WarCrimes its a most. As for Lore outside books I tend to like Nobbel87 videos.

I think a few of them are available on Audible and Amazon. War Crimes is available here.

The story of War Crimes is what I am referring to.
http://www.amazon.com/World-Warcraft-Crimes-Christie-Golden/dp/1451684487

The escape itself is not shown in any of the Visions of Time you get from that quest on Timeless Isle. What you do get is that the bronze dragon you're doing them for, Kairoz, seems to be in suspicious position. You do get a scene from the book that takes place during the Trial, but that was the extent.
Blizzard said that they didn't want to do an ingame event for the Trial because it would take away resources that were focused on finished Warlords of Draenor (a statement that made many feel it was going to be released earlier in 2014). Instead they've opted for this big cross-media campaign leading up to it:
novel: Christie Golden's War Crimes (May 2014)
short story: Robert Brook's Hellscream (August 2014)
graphic novel: Gul'dan and the Stranger (August 2014)
And video: the Lords of War series, which so far has previewed Kargath Bladefist, Grommash Hellscream, and Durotan.

If you're into the novels the most recent book "War Crimes" is about the events that occur between the end of the Siege of Orgrimmar and Warlords.