We found 4 Reddit comments about White Metropolis: Race, Ethnicity, and Religion in Dallas, 1841-2001. Here are the top ones, ranked by their Reddit score. 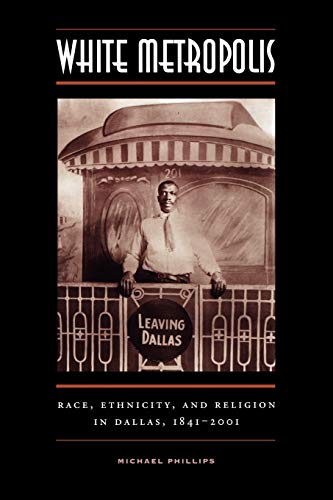 I'm from poor white background and my grandfather was a sharecropper. The majority of whites in the South were not the gentry class, but poor working class. One of the main reasons that racism persisted so much was that whites and blacks were competing for the same jobs, and when a demographic threatens your lively hood one tends to discriminate against them. The rich in the South were basically an aristocracy so I get your point, but to assume that anyone in the South who was racist is lazy is racist in itself. Please watch your wording in the future. A good book I've read is White Metropolis, it's the story of race in Dallas. http://www.amazon.com/White-Metropolis-Ethnicity-Religion-1841-2001/dp/029271274X

It's a bit old now and really academic but "Dallas: The Making of a Modern City" by Patricia Hill is interesting. But I like real history that doesn't whitewash or sugarcoat it. From an Amazon description:

&gt;From the ruthless deals of the Ewing clan on TV's "Dallas" to the impeccable customer service of Neiman-Marcus, doing business has long been the hallmark of Dallas. Beginning in the 1920s and 1930s, Dallas business leaders amassed unprecedented political power and civic influence, which remained largely unchallenged until the 1970s.

&gt;In this innovative history, Patricia Evridge Hill explores the building of Dallas in the years before business interests rose to such prominence (1880 to 1940) and discovers that many groups contributed to the development of the modern city. In particular, she looks at the activities of organized labor, women's groups, racial minorities, Populist and socialist radicals, and progressive reformers—all of whom competed and compromised with local business leaders in the decades before the Great Depression.

&gt;This research challenges the popular view that business interests have always run Dallas and offers a historically accurate picture of the city's development. The legacy of pluralism that Hill uncovers shows that Dallas can accommodate dissent and conflict as it moves toward a more inclusive public life. Dallas will be fascinating and important reading for all Texans, as well as for all students of urban development.

Another book is White Metropolis by Michael Phillips, who is a local historian and community college professor (I believe). From the description:

&gt;From the nineteenth century until today, the power brokers of Dallas have always portrayed their city as a progressive, pro-business, racially harmonious community that has avoided the racial, ethnic, and class strife that roiled other Southern cities. But does this image of Dallas match the historical reality? In this book, Michael Phillips delves deeply into Dallas's racial and religious past and uncovers a complicated history of resistance, collaboration, and assimilation between the city's African American, Mexican American, and Jewish communities and its white power elite.

&gt;Exploring more than 150 years of Dallas history, Phillips reveals how white business leaders created both a white racial identity and a Southwestern regional identity that excluded African Americans from power and required Mexican Americans and Jews to adopt Anglo-Saxon norms to achieve what limited positions of power they held. He also demonstrates how the concept of whiteness kept these groups from allying with each other, and with working- and middle-class whites, to build a greater power base and end elite control of the city. Comparing the Dallas racial experience with that of Houston and Atlanta, Phillips identifies how Dallas fits into regional patterns of race relations and illuminates the unique forces that have kept its racial history hidden until the publication of this book.

One of the reviews:

&gt;This compelling book goes a long way toward explaining Dallas's dysfunctional political machine by exposing the history and nature of its engine. According to Phillips, political power in Dallas has always been partitioned on a sliding scale of "whiteness", with WASPs at the top, African Americans at the bottom, and everyone else (notably Jews and Hispanics) jockeying for position in between-- a practice that is still in effect today. The evidence for Phillips' argument is overwhelming and it will be interesting to see the reaction to this book (if any) by Dallas's power structure and its critics. Phillips spares no one, including Dallas's current civil rights activists, whom he accuses of taking only a superficial stab at real change and minority empowerment.

I know when it was built. I would recommend this book.

Reading this for my Urban Anthroplogy Class and it’s probably one of the most insightful things I’ve ever read.