We found 11 Reddit comments about Who Really Cares: The Surprising Truth About Compassionate Conservatism. Here are the top ones, ranked by their Reddit score. 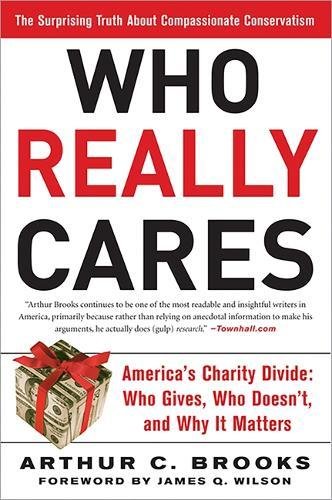 11 Reddit comments about Who Really Cares: The Surprising Truth About Compassionate Conservatism:

This is one of the most supportive groups I've ever seen. Studies have shown that conservatives donate about 30% more than liberals do; I suggest a book called "Who Really Cares" https://www.amazon.com/Who-Really-Cares-Compassionate-Conservatism/dp/0465008232

And that is a lie. And you know it.

Also, this makes a fairly unassailable case that more charity exists than welfare now, and that's long after states have dissolved mutual aid societies, charity hospitals, and food co-ops as they once were.

I don't have data on hand, but no reasonable person would claim that less well intentioned but mistaken redistributive programs would mean less charity. I'd say pretty much everyone would be forced to take the initial guess that it would be more charity in that case, not less. There's more held by people to be given away, and no pretending that an authority will take of it instead the people.

I mean, I'm an atheist, and a generous one .. so this book clearly makes me uncomfortable. People like me in most ways are not as generous as I am, for some reason. Your book explains the overarching reason. This one explains the individual data.

&gt;Many Republicans have transformed her ideas and beliefs into something pretty terrible though. It's really become a way to say "fuck everyone else but me!"

The problem is conservatives give more to charity than liberals.

Beliefnet mentions the book and the research, so I linked to it.

Would you be happier with just an Amazon link to the book and no detail?

Ah, yeah, I did see that Kristof op/ed. I don't necessarily agree with some of his conclusions but it was still an interesting read, and he does make the point that it's more complicated than it seems.

Also, Kristof cites the 2006 book Who Really Cares, which makes the argument that conservatives tend to donate more to charitable causes than liberals and where, I suspect, Takuwind is basing their claim on. I'd have to read the book to have a meaningful opinion on it, although I do want to point out that an academic paper published in 2013 disputes some of the findings in the book.

The argument is uncompelling as they define charity as only things that liberals consider to be charity. They assume the conservatives giving to churches (which are in fact responsible for the most charity work of any type of organization in this country) are not doing true biblical charity, but they don't "readjust" the numbers for liberals that are giving to planned parenthood, world wildlife fund, etc. basically, even if you accept the dubious argument the make, you have to accept that it is being applied to only one side.

Read the book "Who really cares" it turns out that democrats give the least to charity by far.

It's all bullshit window dressing to get votes.

Never read it, but if you can find a PDF might be an interesting read:

The relationship between ideology and donations is spurious.

Religious people tend to be conservative.

Religious people also give to charity.

In fact, religious liberals are similar to religious conservatives when it comes to charitable giving.

If you "stopped reading" at where I said "leftist," then you would have never made it to the part where I talked about the GOP. How are you going to let me catch you in a blatant lie within your first sentence, lol.

What I was referring to in that statement was the book called Who Really Cares which was written by a liberal who wanted to research which states, conservative or liberal, gave more to charitable organizations. Spoiler alert, to the liberal author's dismay, nearly all of the top 30 states that contributed to charity and the poor were conservative states. The author infers that, because liberal (leftist, really) states believe that the government should take care of everyone, they don't actually donate as much or contribute to charity. In other words, they are all talk but truly do not care about others. I thought it was worth mentioning because it's another phony aspect of leftists on how they pretend to be "compassionate to human life" yet give less to charity and want to murder unborn (and born) babies. You can read the book yourself here: https://www.amazon.com/Who-Really-Cares-Compassionate-Conservatism/dp/0465008232/ref=sr_1_1?keywords=Who+Really+Cares&amp;amp;qid=1557952596&amp;amp;s=gateway&amp;amp;sr=8-1