We found 2 Reddit comments about Witness to Transformation: Refugee Insights into North Korea. Here are the top ones, ranked by their Reddit score. 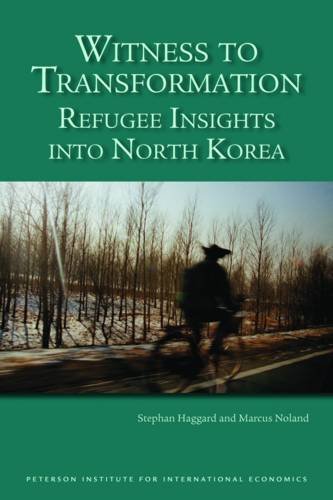 No, I would not agree. The change from mass starvation to "mere" mass malnutrition -- while Kim Jong Un wastes billions of dollars on things his people can't eat -- is the result of cross-border smuggling, semi-legal private agriculture (the so-called sotoji plots) and the encroachment of small, private markets. Marcus Noland and Stephan Haggard have written whole books about this:

I see very little (if any) evidence that special economic zones have had anything to do with that change. Please cite a reliable source for your assertion.

We've been trying to buy North Korea into civilization since 1998, and the results pretty much speak for themselves. North Korea is changing, but not from the top down. It's changing from the bottom up. The government is doing everything it can do disrupt that. Engagement itself isn't a faulty idea, but you're advocating for engaging the wrong people. And engaging the ordinary people of North Korea won't be possible if the regime is barring the way to that.

I believe it's time to block the funds that are paying for border guards, cell phone trackers, and other ways of cracking down on the North Korean people. When Kim Jong Un can't afford that crackdown anymore, people will flow across the borders both ways. Food from private plots will fill markets. Food prices will fall. Information will flow in to enlighten the people. People will get cell phones, and they'll use them to organize labor unions, churches, and dissent organizations. That's how dictatorships change -- not because of their dictators, but despite them.

I agree with your main point, that the only people capable of opposing the regime are unlikely to. But your first paragraph is inaccurate.

A decent number of North Koreans have cell phones, mostly illegal devices from China. This is also true of television sets, DVD players, and more recently, laptops. North Koreans do have (limited) access to international media. Depending on where you live, electricity is available at least some of the time. While a lack of food/water was a real issue in the 1990s during the famine, the country has recovered somewhat, and most families get by on small-scale market activity and state rations. Obviously rural areas have fewer amenities, but a family in Pyongyang enjoys a decent standard of living. Basic education is good - the literacy rate is really high (you might dismiss the reported 100% rate as propaganda, but consider a) Korean is really easy to learn to read, and b) the state uses the education system for political indoctrination).

Basically, most North Koreans are doing just well enough that joining a rebellion and overthrowing a very powerful government isn't worth the risk for most. Up until recently, the vast majority of refugees left North Korea for economic reasons. This is changing as access to international media raises political awareness. Look into Witness to Transformation, a survey study by Haggard &amp; Nolan that looks at refugee and defector reports of life in North Korea. (There's also a blog by the same name, which is good for well-researched articles on North Korea-related current events.)

The North Korean military employs a huge portion of the population - and it provides for them, above-and-beyond what the average citizen gets. These are the people who would be capable-but-unwilling -- or at least, so far. Rather than a ground-up peasant uprising, domestic political change in North Korea could possibly come about through a military coup. There is conjecture that Kim Jong-Un's early purges were to prevent just that.