We found 4 Reddit comments about Women's Lives in Medieval Europe: Second Edition. Here are the top ones, ranked by their Reddit score. 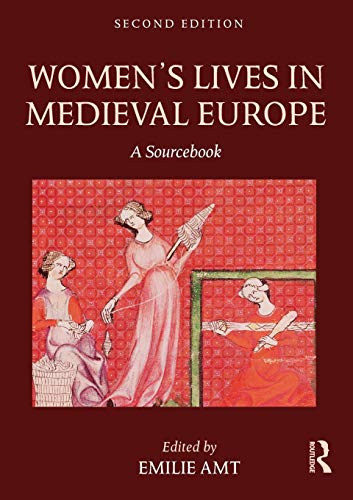 Okey dokey, so, lets start from the beginning. First "Medieval Europe" covers about 1000 years of history, across an entire continent, and dozens of different cultures. Where and when are just as important as what. Making generalizations is pretty much impossible. For the purposes of this, I will be sticking to the typical conditions in England and southern France. Northern europe operated on a COMPLETELY different, and MUCH more egalitarian set of rules. I will touch on that later.

Yes, of course there were non-white people in medieval europe. Moors from north africa who invaded what is now southern spain, and parts of italy. They ruled for about 500 years. They were expelled in the early 1200's. (http://en.wikipedia.org/wiki/Umayyad_conquest_of_Hispania).

In addition, merchants from the middle east were common in some parts of medieval europe. Things were actually pretty shitty for them, due to the legal structure.

Speaking of the legal structure, laws as we think of them today didn't per se exist, and could vary wildly from one town to the next. They were closer to an amalgam of local custom and general policy. A codified legal system was pretty much nonexistent in that period. None of which applied to foreigners (which included simple non-residents in many area), including the aforementioned merchants, who had no recourse. It was pretty much open season on them anywhere outside the major cities and trade routes.

The other thing that's very very important to consider, is that the rules the commoners lived by (the overwhelming bulk of the population) were very VERY different from the rules the nobility lived by. But to address your bullet points:

Warning: Most of my resources are in the form of books, scholarly research, basically non-digital format. I will, unfortunately, be making heavy use of wikipedia for this. I will include a bibliography at the end to get you started.

Ah, I was trying to give off the vibe that I wasn't an expert on this, but after rereading my post, I see that I didn't do a good job with that. This is in no way my expertise, but I have encountered this topic in my studies.

I think Emilie Amt (who is a very important scholar in the topic of ancient and medieval European gender) may have referred to this in her Women's Lives in Medieval Europe: A Sourcebook, but I'm not entirely sure. I tried digging through some primary source collections on my desk, but the ones I have with me at the moment focus specifically on the crusades, so that doesn't help much. I also tried digging through Fordham University's Internet Medieval Sourcebook on marriage, but I wasn't able to find what I was looking for (you might see something related if you want to take a look).

I know I've encountered this somewhere, but I can't find it! Truly sorry!

According to wiki the age 6 was just the proposal and the actual consumation at 9 or 10. Still incredibly young. Also yes, 12 years according to https://www.amazon.com/Womens-Lives-Medieval-Europe-Sourcebook/dp/0415466830

edit: missed out on reading"more common". Yeah, 12 was not usual.