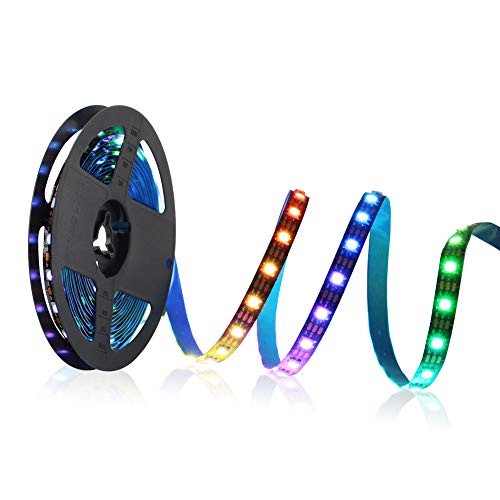 Length: 16.4ft/5M, LED Quantity: 60 LEDs of RGB SMD5050 per meter, IP30 non-waterproof, Black PCB, DC5VDream full color programmable LED Strip, WS2811 IC Built in 5050 SMD, 256 brightness display and 24-bit color display. Each pixel has own color and brightness. Control them individually and set any color or animation you want.Work great with Arduino, ready-to-go library, FastLED library and Raspberry Pi, etc. Easy to program.Comes with 3pin JST-SM connectors and separated power/ground wires on both ends. Each LED can be cut off without damaging the rest strip. You can shorten, lengthen or bend it freely.WS2812B can be used to make led screen, led wall, advertising board and widely applied to hotel, KTV, bars, Outdoor advertising signs, Christmas or wedding party decoration, and so on.
Check price on Amazon

Put them on a base, not on your skin. You will dissolve the adhesive and they won't stick to you, a plastic mask would be pretty easy to rig up. Also those are 5050 leds, which are kind of terrible in my opinion since you can only power the whole strip at once, you can't control segments. Go with ws2812b or ws2811 which are the individually addressable and controllable type. The 5050s can be controlled by an arduino board but not very well. For the board, go with a 5v Trinket or Nano, small and easy to control.

This strip has a higher light density and is generally easier to work with: https://www.amazon.com/CHINLY-Individually-Addressable-Waterproof-waterproof/dp/B06XNJSKXN

Yeah, absolutely, here's what I send to people who ask:

LED: CHINLY WS2812B 5v (300 LED count) I bought a couple of brands for experimenting, and these are by far the brightest and more reliable LED's that I found. Powering them is trickier because they're double density; 300 led's per 5 meter instead of 150 per 5 meter.

Controller: Advatek Pixlite 16 MK2, This was the more expensive one. I bought it because I wanted NO limitations. It can control approximately 16,000 LED's plus 4 DMX universes. It works like a charm. There is a cheaper one called the PixLite 4.

Software: LightJams There is definitely a learning curve with this program, but it was the best that I found to do what I wanted. It can control any type of fixture, and is a very good price. I chose it because it can send ArtNet signals and sACN. This was important to me because I want to use the DMX universes, but the PixLite Controller cannot use the DMX outputs with ArtNet. All other software only uses ArtNet, but I needed sACN support so I can use both LED's + DMX. You can download the trial and use the trial to design all your setup and then buy a license (or rent a license for cheap!) when you're ready. There is a Google group where the developer will answer any questions. He is very helpful.

I was able to build 4 x light poles on PVC (3 rows of 87 LEDs for a total of 1,044 LEDs), with 3 power supplies, PixLite controller, software license, wires/cables for less than $800USD. I can continue adding more poles as I wish. Each pole costs about $60USD to make not including the controller or software.

Gladly! I based my builds on one developed by Ulrich Radig, who makes his source code pretty freely available on his forums and on github. He's got an (older version) assembly and demonstration on that first link, towards the bottom.

Basically, you lay out strips of WS2812 LEDs to form a grid of lights, say 13x13, depending on how many letters wide your clock face needs to be. These LEDs can be controlled individually by a signal from a microprocessor, so you can turn on just the necessary lights instead of the whole strip. For a controller, we use a NodeMCU 12-E or similar ESP-8266 board, which is a low cost (8 euro) microcontroller that also has wifi built into it and which can be programmed in the same manner as an Arduino. You then put a grid between the LEDs to mask the lights and to prevent the light from lighting up the letters around it, since you just want one letter per LED to be lit up. Ulrich used water jet cut foam for his, my first one was cardboard, but I now have a 3d printer and will print something for it. Over the grid, you put a face plate with the letters etched, cut, or painted on it. Ulrich used a silkscreen method on glass. I used painter's tape on a opaque plexiglas, traced and cut out the lettering, then a couple of coats of black spray paint over that. I carefully peeled out the tape and it left a negative of the letter for the light to shine through. This time I'm going to maybe do something nicer, laser cut metal or wood (haven't quite decided). The whole device is run on 5v power, so a simple 2A USB style cell phone charger is all you need for power.

Ulrich did most of the heavy lifting with his code, where he created a sort of library that stores the "addresses" of the LEDs in a big matrix, then created reference functions to the matrix. Calling the function "Es" lights up LEDs numbered 1,2. Calling "ist" lights 4,5, and 6. This is set up for all the other words as well. He also built in a time lookup service to sync the time over the internet, and he included a web server function so you can connect to the clock over wifi and control the colors, brightness, and so on. I have mostly just adapted his code on my previous projects, but I hope to go a little further on this one, to add in a battery powered back up clock module, and if I have time, to refine the web server that Ulrich made.

Really appreciate the info, I am working on a project similar to this one, and this one but with much less LEDs. Ideally I'd like to run 900 individually addressable LEDs, all controlled by a Teensy using these LED strips. I know it's a bit ambitious for my skill level, and I am slowly working up to assembling the project. Got any advice for me before I fry myself?