We found 8 Reddit comments about Yotsuba&!, Vol. 1 (Yotsuba&! (1)). Here are the top ones, ranked by their Reddit score. 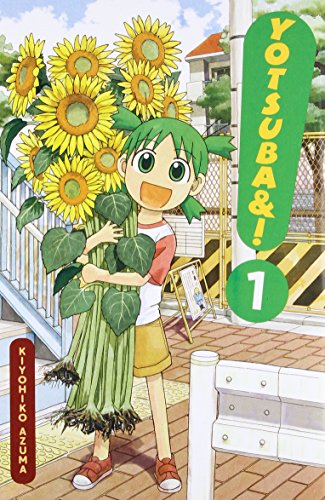 "Most manga is of a sexual nature" is an enormous overreach. It might be disproportionately represented by English-language internet anime fanboys, but that doesn't reflect the state of manga in Japan. Manga is read widely in Japan, including young children. Some of the manga I've been reading lately include Chi's Sweet Home, a comedy manga about a kitten and her family; Yotsuba&amp;!, a completely wholesome manga about a kindergartener; and a lot of manga based on Pokemon, which are as family-friendly as the Pokemon cartoon that's aired for children for decades.

I'm not defending the sexually exploitative nature of the many manga that are, but saying all manga is sexualized is as absurd as saying most video games are hyper-violent murder-sprees. M rated games exist, but most people play Mario, Pokemon, sports games, etc. Hypersexualized manga exist, but most Japanese people read non-sexual manga like Doraemon and Astro Boy.

Take a look at the historically highest-selling manga in Japan; most of the biggest contain little to no sexual content: https://en.wikipedia.org/wiki/List_of_best-selling_manga

IT’S PLAINTEXT. THIS IS MANGA.

NHK Easy Web is perfect for starting out. I've always recommended it for learning kana in context, when repetitive writing of them doesn't seem to help memorize them. Plus easy kanji in context, and easy and simple enough sentences. A bit rough going at first, but you do what you can, and you'll likely get the overall sense of the article.

I also like the Japanese Reader Collection and Yotsuba&amp;! are also excellent and easy enough. Just take your time with them, you'll learn a lot. A little light manga never hurts.

I'd love to recommend the Japanese Graded Reader, and do, but they're kind of pricy for what you get. If you have some spare cash, these are worth it.

Idk if amazon has the full series, but it has atleast some of it.

Well you can buy the volumes off amazon (with Kindle versions available), if that helps. They're relatively inexpensive.

Before I get to the list, I'll mention that it may not seem like I'm super active, but I was away from the sub for a week or so, but if you look into my posts from before that, you'll see I'm pretty active. :)

3.) Something food related that is unusual. - It's a Kit Kat. But it's GREEN TEA flavored!

4.) Something you want to gift to someone else, and tell me why. - I've been trying to get /u/quickwittedslowpoke to buy this manga because it's awesome, but she hasn't yet. I really want her to read it!

5.) A book I should read! I am an avid reader, so take your best shot and tell me why I need to read it! - Shameless shilling. My friend wrote this book and I want him to become famous! :D

6.) An item that is less than a dollar, including shipping... that is not jewelry, nail polish, and or hair related! - I don't really have a great reason for this, it was just on my mind because I had considered getting it as a gag gift for my uncle's birthday since his lucky number is 113 and that Pokemon is #113, but I didn't end up doing it since it wouldn't have arrived by his birthday (which already passed).

8.) Something that is not useful, but so awesome you must have it. - It's literally just a statue. It doesn't do anything but look cute. But she's one of my favorite characters :D

9.) A movie everyone should watch at least once in their life. Why? - This is one of the best Anime films of all time. Even if you're not into anime, I still highly recommend it. It has won COUNTLESS awards already. It's a pretty big deal in the anime community. It's got a great plot and it's so sad that if you don't cry, you have no soul.

10.) Something that would be useful when the zombies attack. Explain. - Zombies can't swim. Foolproof plan. They'll eventually decay in the sun and all die within a few days, and you'll be out on your cool ass boat, safe from the chaos.

11.) Something that would have a profound impact on your life and help you to achieve your current goals. - I know it seems a little silly, but I'm trying to learn to cook better, and I just don't really have very good cooking tools...

13.) Something fandom related. - It's three fandoms in one! Super Smash Bros, Nintendo and Final Fantasy! :D

15.) Something with sharks or unicorns. - It was actually pretty decent.

16.) Something that smells wonderful. - At least I think it does. Needs lots of sugar though lol

17.) A toy that you wanted or had when you were a child that was the best ever, or (if it’s not on amazon) a toy that you think is pretty cool now - Does this count? I had the original back in the 80s/90s, and this is a new model with packed in games. But yeah, this shit was my childhood!

18.) Something that would be helpful for writers. - I mean, really, what're you gonna do with unsharpened pencils?

19.) Something related to your current obsession, whatever that may be. - The Precure anime franchise is one of my guilty pleasures, and this character, Cure Peace, is my favorite character in the series! :D

20.) Something that is just so random and weird that it makes you laugh. - Because why the fuck not?

Manga seems an obvious choice here, something like Yotsuba to could be fun. Others to check out are Kamikaze Girls and Nana

As is this book on Japanese monsters - The Book of Yokai

Lastly, I am a literature person so I have to recommend at least one piece of literature. Perhaps something like Banana Yoshimoto's Kitchen or Soseki's I Am a Cat could be good a young reader and serve as an introduction to Japanese literature. Though admittedly the Soseki may a little much for 12 years old. It is a great book though!