We found 5 Reddit comments about Zyliss Jumbo Garlic Press. Here are the top ones, ranked by their Reddit score. 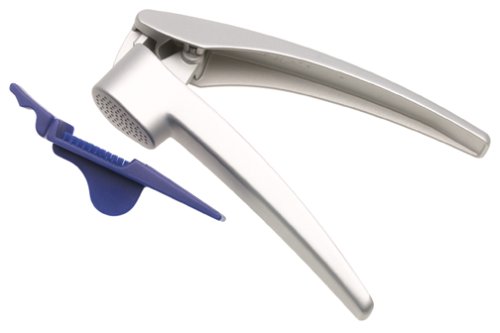 Jumbo-size garlic press can accommodate several cloves at a timeErgonomic handle for better leverage and easy squeezingNo peeling required; includes cleaning tool to remove residual fragmentsCleans up easily by hand or in the dishwasherMeasures approximately 11-8/9 by 1-2/3 by 4-2/3 inches; 5-year limited warranty
Check price on Amazon

The fuckwits railing against garlic presses are the same fuckwits that want us to separate eggs with our fingers. It's like if you don't make a mess out of your hands, you aren't a real chef.

The argument about "wasting garlic" also tickles me pink. A head of garlic costs what, 70 cents? And you use how many cloves a day? I cook a couple meals a day and I'm hard-pressed to use up a head of garlic before it gets too dry to work with.

I also love people who say "it takes up too much room" as if they're backpacking with the fucking things. Maybe you live in a dorm, maybe you live in a submarine, maybe you live in a Toyota Tercel. If you live anywhere else, your kitchen has at least two drawers and I'll bet your silverware fits in one of them. What fits in the other drawer? Fucking everything else. If you don't have room for a garlic press in your life, fucking move. You're a grownup, get a real kitchen.

Then there's the "it's messy to clean" argument. Grow the fuck up. You pop a clove in, squeeze the bejeesus out of it, pass a knife over it, turn on the water with one hand, rinse the knife, flip the press backwards, hook a finger into it under running water, and put it in the dish strainer. Know what else needs to be cleaned when you use it? A juicer. a can opener. A knife. A plate. It's been my experience that the people who bitch about cleaning garlic presses are the ones that pre-measure their spices into little glass dishes. Fuck off.

But really, you know what? Garlic presses are fun. The only thing that beats them are meat grinders (which also take up a lot of room and are also awesome you whiny little bitches ever made bacon sausages I rest my case bitchez). You get to use your manly gripping strength to reduce an intricate and pungent little gem of nature into mutherfucking paste. Again and again and again. It's like cracking walnuts only without the crack and with tasty tasty putanesca as the result. Yeah, I can be a bitch and get out my fiddly little knife and cut fiddly little slices of fiddly little garlic so I can toss them in fiddly little olive oil and fiddly little stir them so they don't burn, but that's what bitches do. Heat, squeeze, clean, done. Grunt grunt, oooh yeah. In the amount of time it took you to cut your garlic into slivers I've made the sauce, boiled the pasta, eaten dinner and fucked my wife. And now your fingers smell like garlic whereas mine don't 'cuz that press that's such a bitch to clean? I can do that under running water and get on with my life. You, on the other hand, are stuck with a 4" Henckels and a jeweler's loupe because you're taking cooking instructions from Goodfellas. Douche.

In their defense, most people who hate garlic presses hate them because they're used to prissy pieces of shit or semi-functional testaments to dollars over sense. A garlic press should be like a hammer - heavy, ugly and utilitarian. If you aren't comfortable driving a nail with it, don't let it near your food.

And that's about all I have to say about garlic presses.

The Zyliss jumbo press has a little cleaner which clips into the the handle and lets you clean the entire press in about two seconds under running water. It's excellent, I love mine.

On top of this, you don't have to peel the cloves before putting them in the press, just put them in vertically and the skin will be left behind. This alone saves me far more time than I'd ever lose from cleaning the press. With the cleaning piece though, there's no effort.

I also own a microplane and love it, but it's far less efficient than the press.

I tend to buy stuff based on Amazon reviews. I'm not looking for the most expensive kitchen gadgets, but I want something decent (so I won't be buying it at wal mart).

That being said, one of the things I use most in my kitchen is a cutting board. I cut everything ahead of time, and I got tired of having to pull out 3 or 4 small cutting boards, so I bought one bit 15"x20" cutting board from Sams Club. It was like $10 or so, but unlike any of the other boards I've used, it hasn't stained or warped at all, nor has it been scratched up nearly as much as my other boards.

I have considered the brushy guys, that one looks like it has the resevoir for soap in it. My garlic press, though, came with a little plastic cleaner thing that stores in the handle, similar to this one

I'm on my 2nd Zyliss, only because I lost my last one in a divorce. They're great.