We found 80 Reddit comments discussing the best decking & fencing products. We ranked the 42 resulting products by number of redditors who mentioned them. Here are the top 20. 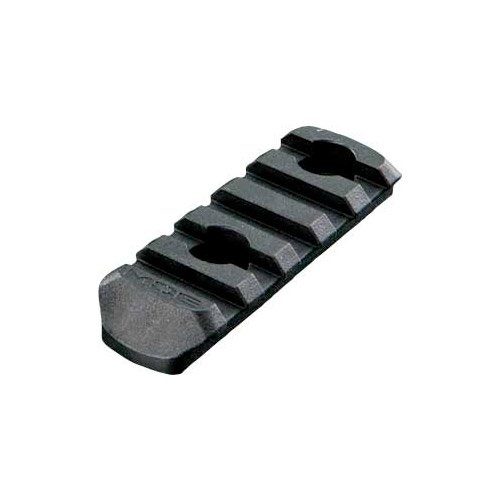 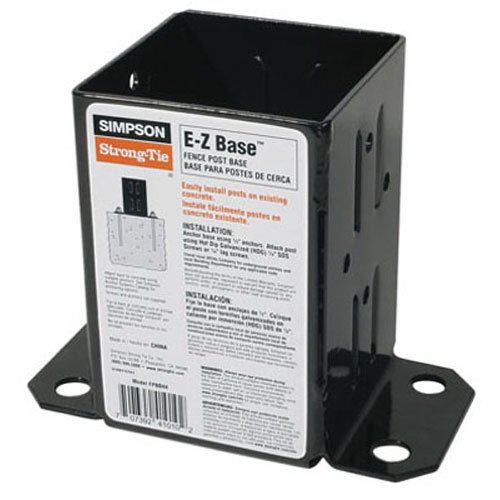 Allows easy installation of 4x4 wood posts on existing concreteEasy to install in concrete with 1/2 in. diameter anchorsMade from 12 gauge steelBlack Powder-Coat. Post bases do not provide adequate resistance to prevent rotation about the base and therefore are not recommended for non-top-supported ...
Read Reddit commentsView price 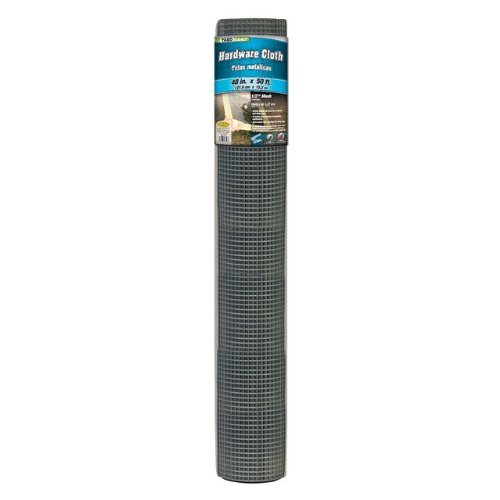 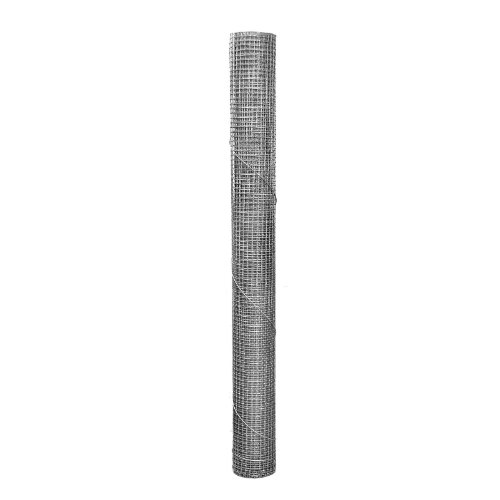 24inx5ft hardware cloth is 1/4in square mesh which is galvanized after welding is used in gardens, workshops and for everyday home projectsEconomically sized rolls for easy useThis product is made in China23 gauge galvanized hardware cloth with 1/4-inch openingsHardware cloth is a welded product tha...
Read Reddit commentsView price 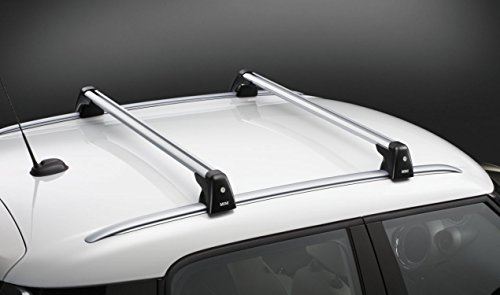 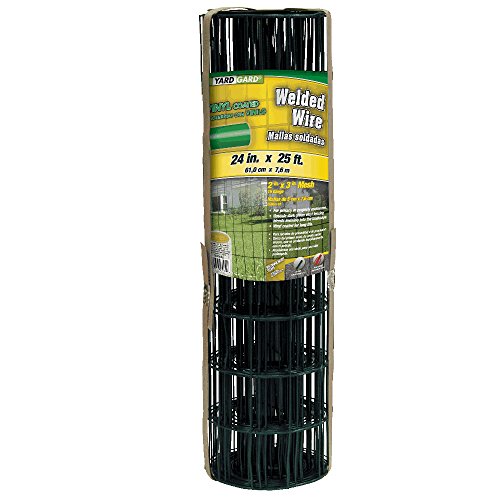 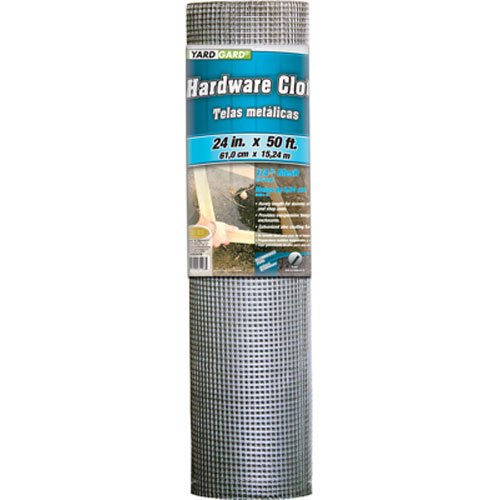 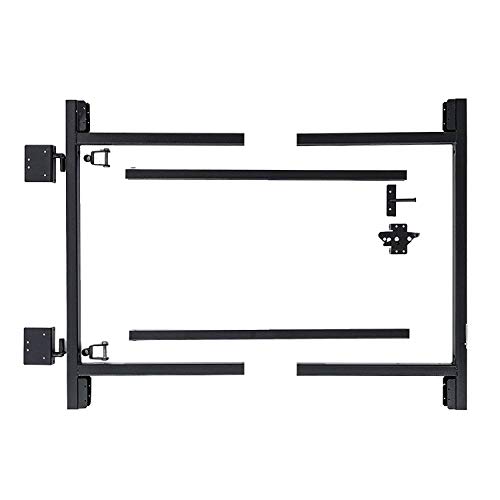 ANTI-SAG GATE KIT - This gate hardware kit has a patented truss cable system that keeps your gate from sagging or dragging. Use it to fix an existing gate or build a new gate up to 60" wide. Use for wood or composite 2-rail fence.EASY TO INSTALL - The Adjust-A-Gate building kit is installed on-site ...
Read Reddit commentsView price 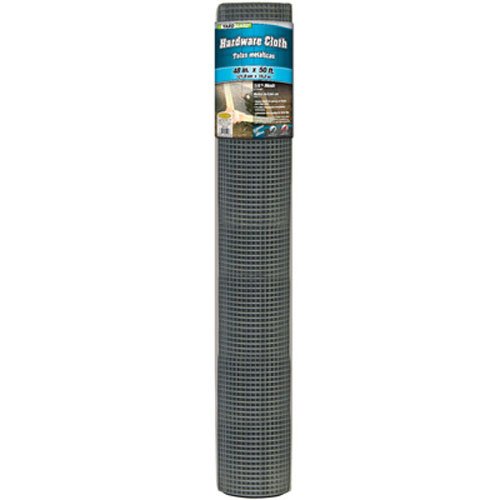 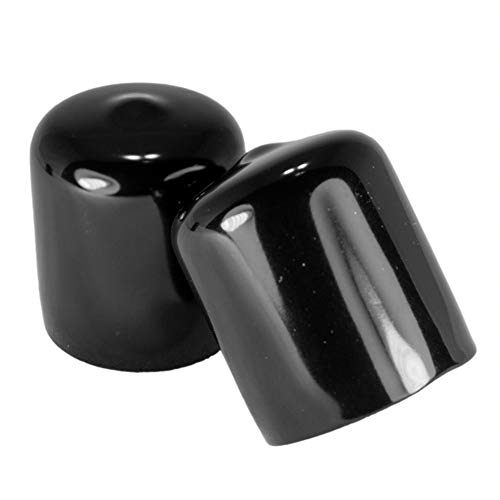 Fits 3/4" round OD tube or pipe ( 3/4" OUTSIDE diameter) & can stretch up to 1/16” larger for a snug fit without tearing or splitting. 1" deep / tall to provide a secure fit.High-grade Prescott Plastics brand black soft PVC "rubber like" caps are made in the USA. Our caps are designed to hold up a...
Read Reddit commentsView price 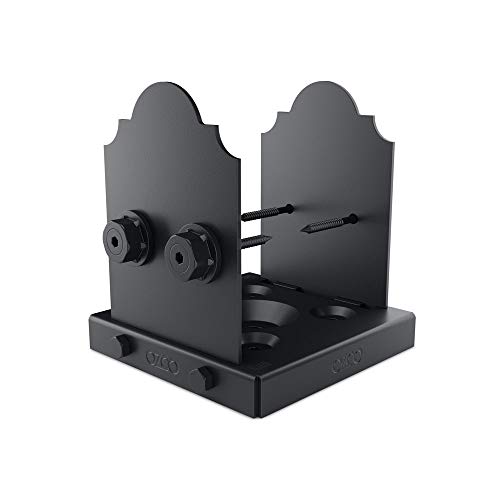 Includes: 1 Post Base Plate; 4 Decorative Plates; 8 Hex Cap Nuts; 8 each of 1/4-inch by 2-3/4-inch OWT Timber ScrewsBases are made of galvanized steel, then black powder coated with an attractive finishIncludes hardware for attaching base to post for standard installations3/16-inch thick hot dipped ...
Read Reddit commentsView price 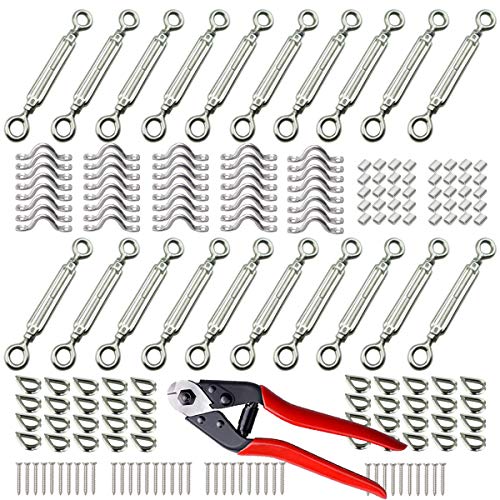 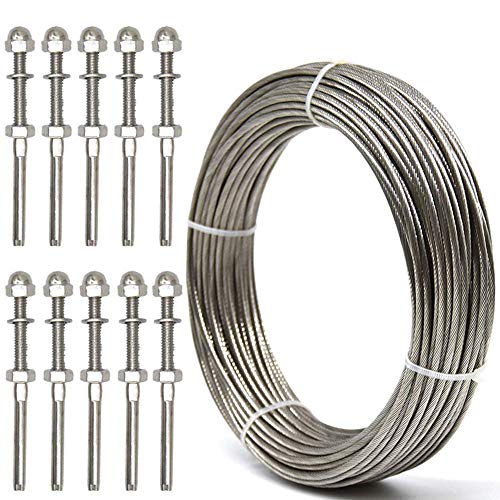 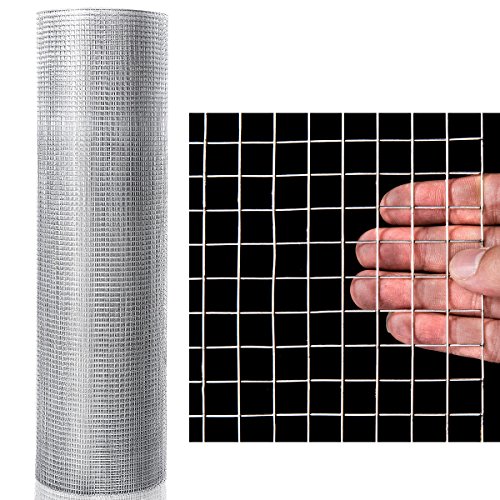 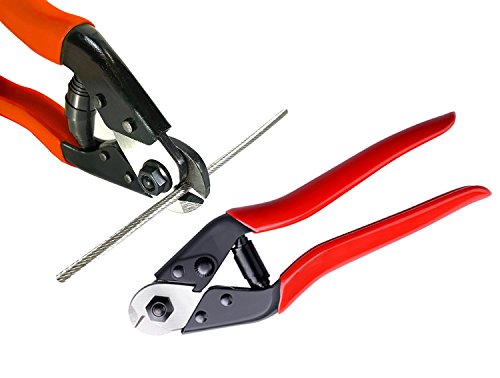 ★Using SK5 high carbon steel Seiko forging, durable, If you want to cut the steel cable seals, single strand wire, like the fencing wire, any bolt cutter should do.★Knife edge by a special heat treatment, cutting fast formation without fraying or smashing the ends. it not only cut the cutaway ca...
Read Reddit commentsView price 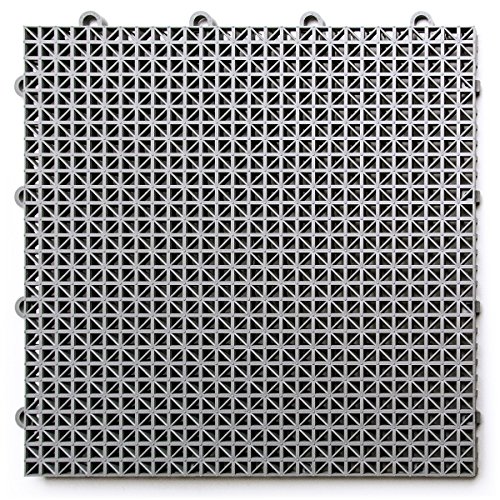 DuraGrid outdoor deck and patio flooring is designed to withstand extensive UV exposure and high foot traffic. Each tile is anti-microbial to fight mold, mildew and bacteriaPerfect accessory to any outdoor area. Front entry, mud room, deck or patio. Use around hot tubs and saunas for added comfort a...
Read Reddit commentsView price 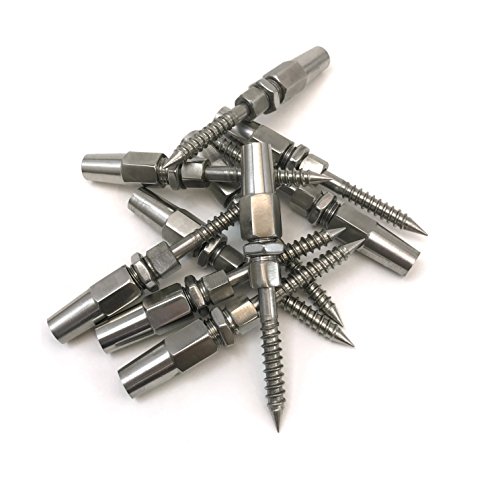 These high quality stainless steel cable railing hardware kit is perfect for planning your own cable railing project, good for indoor or outdoor applicationsNo Special Tools Required enables a quick and easy Installation which saves time. You'll be enjoying cookouts with friends on your deck in no t...
Read Reddit commentsView price 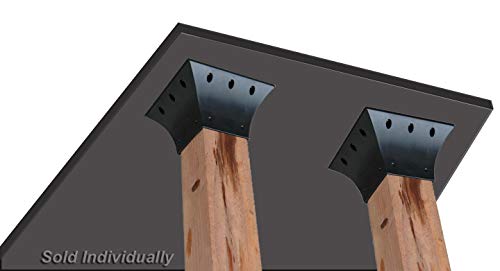 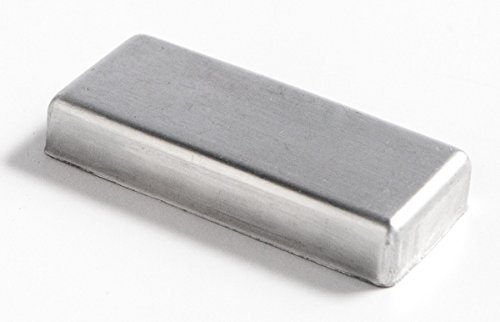 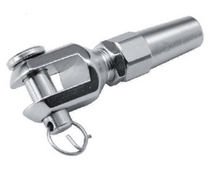 Then that's a shitty ass gun range. Most ranges don't give a shit about retarded laws. Personally I have a copy of the March 21, 2017 letter on me when I take my AR 9 to the range.

If you live where it's hot, they'll breath mouth open like that. They'll also hold their wings out to let the air cool them better.

Also you need to get her a coop where she can be safely locked up at night. It can be made very simply, but it needs to be covered with 1/2" or 1/4" hardware cloth like this 4'x50' roll

Take a look through these coops and see if you don't get inspired. You will have to let her out daily, but she'll be much safer in a coop. You really just need a 3'x3' nest box with a roost and a bit of a run for when she wakes up early and you don't.

Get two of these kits:

Works really well, and you will end up with a pair of gates that will never sag. You will need a pair of well anchored posts to attach them to, but you can handle that.

My wife would digress, she says the curve isn't centered. 2 flats on one side, 3 on the other.

C'mon you run trivia nights, I've seen you post here plenty. There are true idiots on this sub, and you're not one of them (IMHO)

&gt;don't know if I could actually do that.

Don't know until you try. I didn't know until I tried, but I had some fencebuilding experience when my family still had ranches (mostly the old men yelling at me to carry wood, sand, nail, no cutting)

This is how I did it. Maybe I can lend a hand, I dunno. You'd have to entertain my wife and kids and maybe feed us or something. Maybe you could do the same for us sometime.

Do you mean patio? :P


Easy enough. Get one of these then do the hammer drill thing. For bolts in to the concrete either use the wedge anchor or set some bolts in with epoxy. Probably wise to use stainless steel for all your bolts.

Maybe this will help. I don't know what hardware cloth is called in AUS but here is an example of what they are talking about Hardware Cloth

They sell galvanized steel screen mesh that is suppose to be pet proof but in no more than two days a persistent bird can rip through it. I would make a frame that can go over the window with mesh like This! over a wooden frame like this !

It's not available right now, but I bought this from Amazon. It was less than half the price of Home Despot, and with free shipping, it worked out well. It's super sturdy, and good for keeping out predators.

I've looked into this quite a bit and the best way I found (which may be overkill) is to get the following:

My gates are all wood with a correctly built Z frame. The hinges are just off the shelf strap hinges. I really like ring latches.

However, after someone on another thread suggested adjust-a-gate, I had a look and I think that's pretty good stuff!

Are you going to be using a laser sight or a laser pointer?

Like buy a 4 segment rail and another picatinny thingy and mate the two things with epoxy or something. At a 90 degree angle.

We faced this exact problem. Moved into a new home with a severe gopher problem. Fumigation was ineffective. We cleared the backyard out to bare earth and put hardware cloth in under our soil amendments and new sod.

In my research (UC Davis has a great right up here), there are no effective repellents for gophers. The only effective treatments are exclusion (putting in hardware cloth), poisoning and trapping. I went the trapping method and baited with peanut butter. We've been able to clear gophers out of the backyard and I'm working on hunting down the last (I think) gopher in the front.

One more note: don't waste your time with chicken wire. Gophers can chew through the wire and it'll rust away too quickly to help for long.

Some people use chicken wire.

Carpenter cloth is another popular solution.

Yep, toss one of these on the side for the light, one in the bottom for the grip/bipod. https://www.amazon.com/dp/B003F6EMQO/ref=cm_sw_r_cp_api_6yjtybJNE8QMW

Dig a hole 2 feet deep (minimum), pour a footer using an 8" tube form, and use a post base. You can set the base and put the anchors into the concrete while it's still wet to avoid having to drill (just make sure you get it plumb using a torpedoes level). It'll run you all of fifty bucks. The EZ base is the most expensive part.

I was pleased w the quality for the price.

Where can I find a rail with those dimensions?

I have a whole bunch of this stuff in storage. I was thinking of cutting out every other wire to double the size of the holes and using this as a fixed net. Do you think fixed netting would be harmful? My thoughts are that it's stronger than string and re-usable.

For rabbits you an use this https://www.amazon.com/gp/product/B000RZCI30/ref=oh_aui_detailpage_o01_s00?ie=UTF8&amp;amp;psc=1 -- in store is cheaper than amazon.
I'm still anxious to see if the rabbit in my neighborhood can jump this or dig under. I cut it in half so it's only 1 foot high all around.

Deer can also eat kale, squirrels can be a PITA I hear. Best bet is to go all around with row covers or make this https://www.reddit.com/r/gardening/comments/8fna35/the_raised_garden_bed_i_designed_is_finally_done/

.223 are going to be pretty hard to pan lube no matter what because of the small size mixed with the length. You could dip the bullets into liquid lube, but doing that is pretty slow and not really something you will want to to with bullets you will shoot mainly in bulk.

Another option would be use some small wire strung across the pan to form a grid pattern, drop the boolits in nose up to each square before pouring lube into the pan. Along the same lines as that, a baking cooing rack or some hardware cloth should work great and be easier than wire.

That said, is there a reason that you don't want to powder coat the .223 bullets?

Copied from the album:

&gt;Fantastic little light package. The reason I particularly like this kit is because the the flashlight houses its own charging circuit, so you just plug Micro USB in and you can charge it on the fly (off a phone charger), no need for something like a NiteCore charger.

&gt;The overall size of this thing is tiny for how much light it puts out. It has three settings, with memory for the last one used when turned on, from 'blinding' to 'good enough' to 'decidedly dim, but bright enough to not trip over things'. I set it to the middle one. While it has a strobe mode, it's quite difficult to activate accidentally --requiring repeated rapid presses -- which is great for Nerf. I did have to pad the mount with a rubber band, as the flashlight is a smidge under the 1" diameter for the mount. That's fine, though, as it protects the finish of the flashlight from metal-on-metal contact. A polymer mount would be significantly lighter, and I might look to see if one is out there.

&gt;The parts of this kit are as follows.:

i was looking at this one... https://www.amazon.com/WELTEK-Threaded-Terminal-Stainless-Aircraft/dp/B07FBMN6JW?source=ps-sl-shoppingads-lpcontext&amp;amp;psc=1

Would I have to secure it top to bottom or could I get by with just wrapping the bottom of the coop? Thank you so much for the help.

Get a roll of hardware cloth and cut a piece off to fit the exposed area. This stuff comes in handy for rodent proofing your house, too.

You can also have a piece cut for you at any hardware store.

Fill the buckets and then install brackets on top.

Maybe some sort of cap that goes over the contact area? This is what I found quickly.

I believe both the magpul AFG and VFG can mount to that handguard WITHOUT using rails... one of the perks. I know the VFG can for sure. I mount a flashlight on my handguard (I have the same one) and I use the tiny rail section and mount it on the side. Here is the rail I got: http://www.amazon.com/Magpul-MOE-Rail-Section-Black/dp/B003F6EMQO/ref=sr_1_1?ie=UTF8&amp;amp;qid=1421023661&amp;amp;sr=8-1&amp;amp;keywords=moe+rail

Kinda like this, assuming the hole spacing is correct...