Best nursery clocks according to redditors

We found 16 Reddit comments discussing the best nursery clocks. We ranked the 3 resulting products by number of redditors who mentioned them. Here are the top 20. 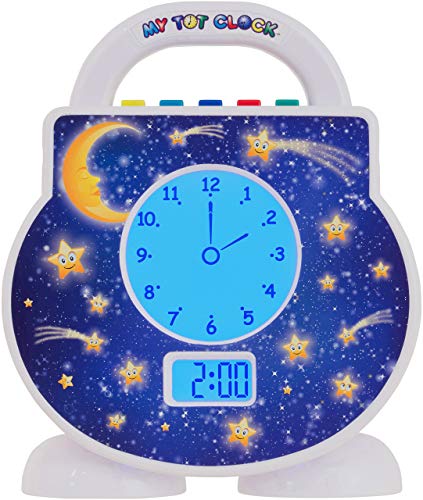 With 10 fantastic features, My Tot Clock is the premier toddler sleep clock and a must-have parenting tool for families with small children. No other toddler clock comes close!Illuminates 5 colors to manage all important tot time: Blue for BedTime, Yellow for WakeTime, Cyan for NapTime, Green for Fu...
Read Reddit commentsView price 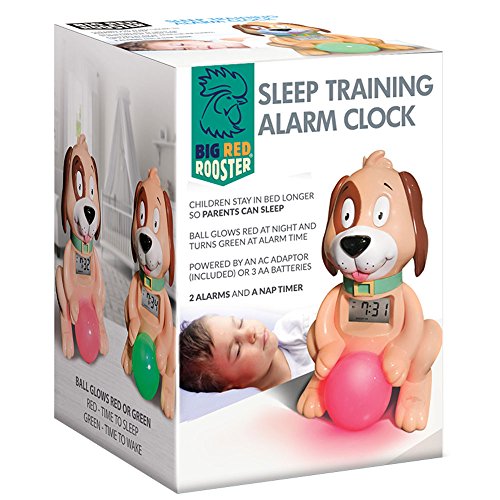 TRAINS CHILDREN TO STAY IN BED LONGER – Parents get to sleep. No more 5 AM wake up callsBALL GLOWS RED OR GREEN - Red means time to sleep; green means time to wake up. The ball glows red at night and turns green at the alarm time2 ALARMS AND A NAP TIMER - Perfect for a weekday alarm time, weekend ...
Read Reddit commentsView price 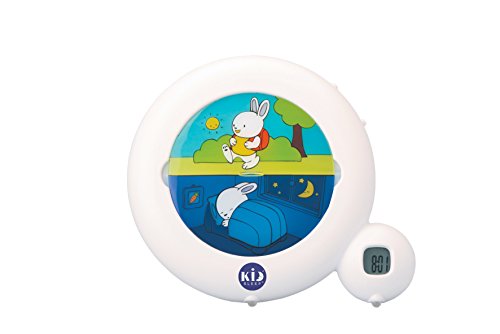 Children's Sleep Trainer helps young children have an understanding of when it is time to get out of bed and when to stay in bed.Can be used as a night light Optional alarm-->See more product detailsAt the time set by the parents by means of the timer, the character changes to the wake-up position. ...
Read Reddit commentsView price
Next page

Ha ha, yeah. That's when you just need to teach them to confine themselves. Honestly, best 30 I ever spent was on this bunny clock I found on amazon. Still keeps my 3 year olds bedtime routine to 10 minutes and keeps him from getting up at 5am. It's just light up pictures and it's as simple as: bunny is awake, your awake. Bunny is asleep, you stay the fuck in bed. I never thought it would work, but after 3 or 4 days of correcting him with "hey, the bunny is asleep, why are you out of bed" it worked incredibly well. Every kid is different, but you never know. https://www.amazon.com/Claessens-Kids-KidSleep-Classic-Improved/dp/B019DO5GS4/ref=asc_df_B019DO5GS4/?tag=hyprod-20&amp;amp;linkCode=df0&amp;amp;hvadid=198101723026&amp;amp;hvpos=1o1&amp;amp;hvnetw=g&amp;amp;hvrand=16065928808396663330&amp;amp;hvpone=&amp;amp;hvptwo=&amp;amp;hvqmt=&amp;amp;hvdev=m&amp;amp;hvdvcmdl=&amp;amp;hvlocint=&amp;amp;hvlocphy=9019669&amp;amp;hvtargid=pla-390806151262&amp;amp;psc=1

The one we bought does that too: https://smile.amazon.com/My-Tot-Clock-New-Improved/dp/B00NC10YFA/

You can say "oh, the blue light is on, it must be bedtime!"

Not sure how old your LO is, but we got a tot clock when our oldest started doing this at 25 months. It was he'll. I was in my 1st trimester with her sister and I needed her to fucking stay put! This is the one we got and it was a fucking lifesaver! (On mobile, so hopefully link works)

Before you cut out his nap, try a clock like this it worked wonders for all my previous nanny kids. They either stay in bed and end up sleeping more, or they get up and play quietly till the light is yellow.

We got a visual alarm clock for our son's birthday. It's awesome because I can set it to have white noise (and light up, if desired) during sleep times. When sleep time is older, the white noise goes off and the face changes color. It's seriously awesome and my 17 month old already has gotten used to being in his crib until the alarm goes off. I leave a board book in bed with him so even when he wakes up early he'll entertain himself until wakeup time.

This is the one we use:
My Tot Clock My Toddler, White https://www.amazon.com/dp/B00NC10YFA/ref=cm_sw_r_cp_apa_mO65Bb6W7ABEN

We have the older and less-shiny version of this clock, which has been a phenomenal lifesaver since we moved our kid into a toddler bed.

It goes blue at bedtime automagically, yellow in the morning (and the new one lets you set different wake up times for the weekend!), has a nap timer (you set nap length, then manually initiate naps and it turns yellow again automagically), and all that.

The other big thing that helped, for us, was breaking out the video monitor again. Shut the door and watch over the monitor and "voice of god" at the kid. Telling him to "get back in bed" without him even seeing us means he isn't getting any ideas that night time is play time.

Combining the two, and he was staying in bed consistently for night and naps (except for when he needs to use the restroom, but we have a small potty in his room for that) since about the end of the first week.

The big rule for naps now is "You don't have to sleep, but you DO have to stay in bed and be quiet until the clock turns yellow."

I use the Tot Clock with my 3 year old. He's had it since he was a few months short of 3, and it had an immediate impact on mornings. He went from calling me, banging his door, and being angry to calmly playing in bed until it turns yellow for wake up time.

Here's one I've read about on the parent listserv: https://www.amazon.com/dp/B00EAHSBV4. There are a few out there, same general concept, and I'll add them if I can remember their names.

Ha here's another for 60 freaking dollars but the reviews are very positive: https://www.amazon.com/gp/aw/d/B00NC10YFA/

I have always used a gate at the door of my now 5year olds room. I guess I'm a bit terrified of him wandering the house if I don't hear him, or worse getting out of the house. While he still wakes up occasionally to go potty, we did break him of the crying several times at night by being firm that he was staying in his bed. (Sort of the cry it out method.) My friend swears by the Tot Clock that shows blue light for sleeping time and a yellow light for time to get up. Parents can set the times and then the child can look at the clock and know that it's still not time to get up. Either way, it takes time and consistency. Sleep deprivation is awful.
Link to Tot Clock:
My Tot Clock (New &amp; Improved) https://www.amazon.com/dp/B00NC10YFA/ref=cm_sw_r_awd_jIyfvb1YZ9GS2

I got the Tot Clock based on a recommendation from my sister-in-law. It has volume control, so you don't have to worry about it being too loud. I don't think it's too bright (but everyone has their own opinion, I suppose).

To be honest, this clock didn't really work for my kid. I'll be honest though, I didn't follow through on the whole "you can't get up until it's orange."

However, he loves the night time features. It plays a song for 15 minutes. He always asks for me to turn it on before I leave his room. You can also change the disc to a story (I believe we have Goldilocks and the 3 Bears, but it's been so long since I've changed it).

It also has a timeout option, which I've used.

My kid is 7 now and rarely sleeps past 7:00 am. So, the few times he has, he'll come to me and brag about how he didn't get up until the clock turned orange.

Recently, I did have to switch the wake-up time to 6:30 so he has enough time to get dressed and eat before off to school.

It's a nice clock and has all the features you desire, but you still have to enforce, you can't get up until it turns orange.

We went through this with our son and this light alarm clock really helped us get him under control.

The light will stay red until the alarm “goes off” and then the light changes to green. We told him he could only come get us after the light was green. Took about a week to sink in but it really helped.