We found 85 Reddit comments discussing the best toy kitchen products. We ranked the 67 resulting products by number of redditors who mentioned them. Here are the top 20. 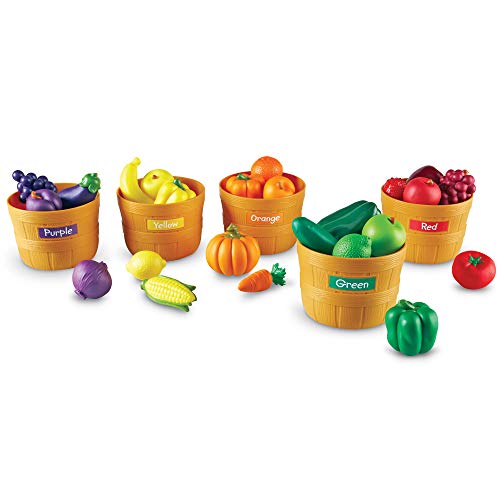 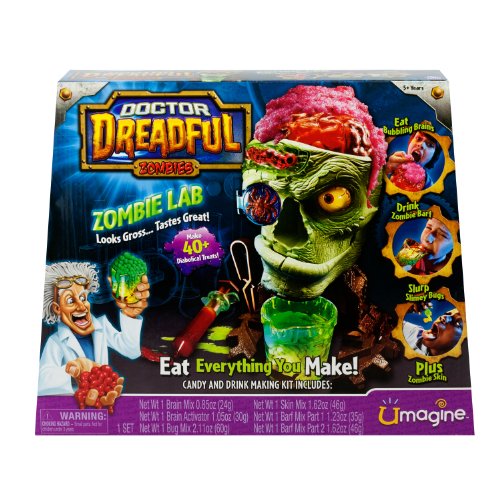 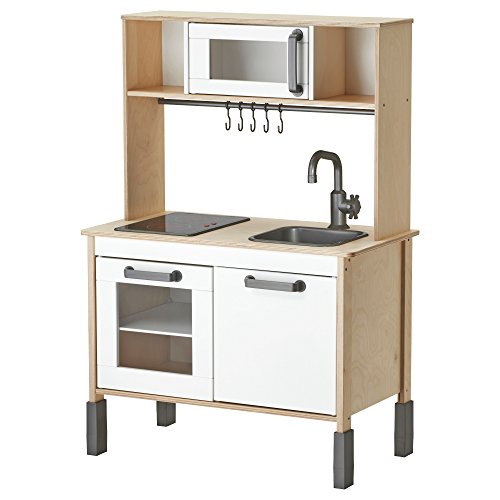 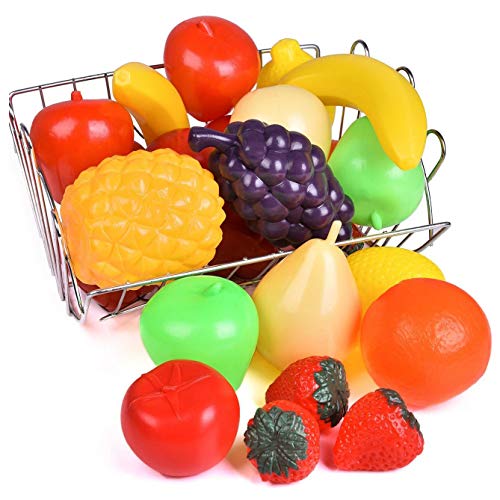 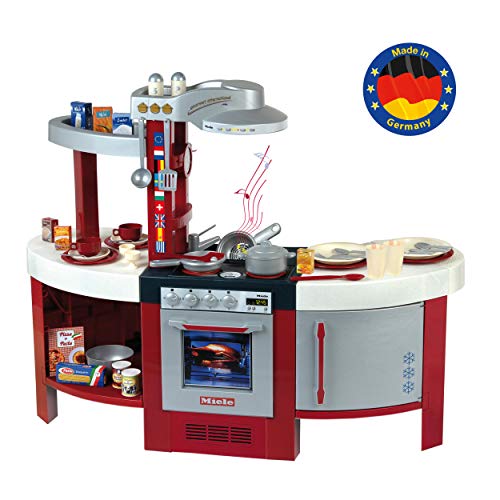 Made in GermanyProduct with the Miele licenseThe integrated soundmodul of the kitchen stove produce a sound which represent the sound of cookingThe kitchen is playable from 2 sides, so oven, dishwasher and sink can both be used perfectlySupplied with many accessories like: Pan and Pot, dishes, kitch...
Read Reddit commentsView price 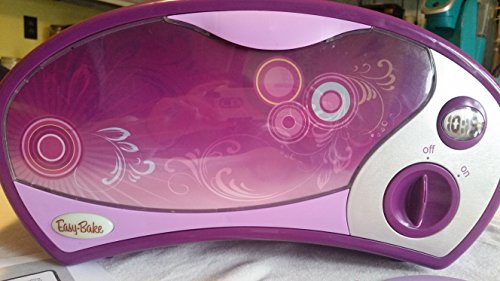 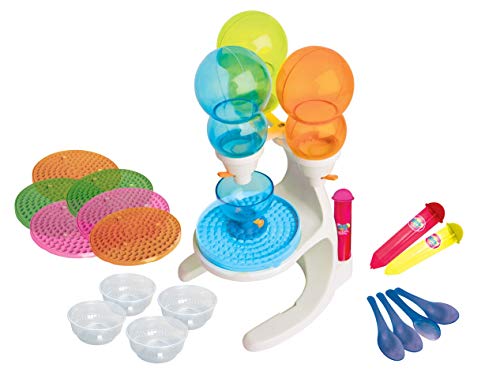 Contains 1 Maker, 6 Magic Dot Freezer Trays, 4 bowls, 4 spoons, 2 pop pens and instruction sheetMagically make frozen Dots at home Totally easy to usePlace your treats in the freezer and enjoy them 2 hours later. The set comes with 4 bowls and spoonsBONUS - Includes $20 worth of coupons inside for d...
Read Reddit commentsView price 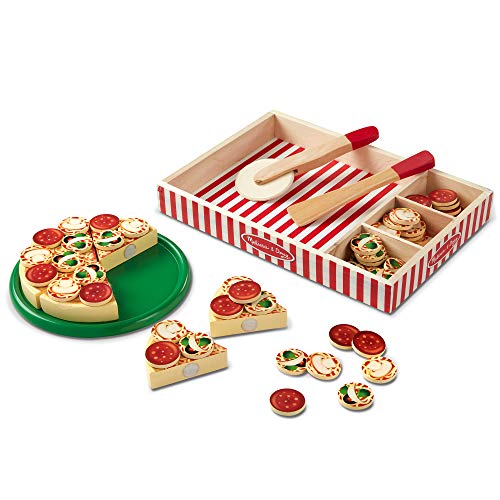 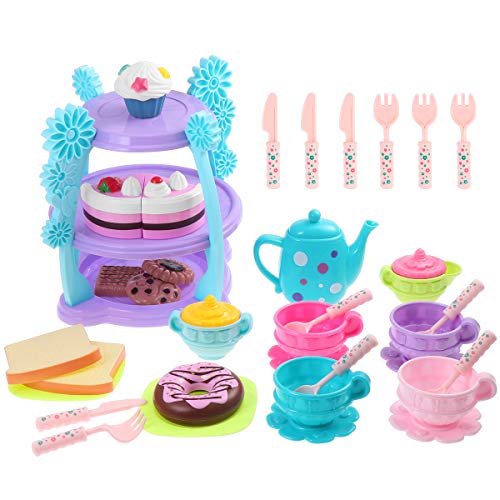 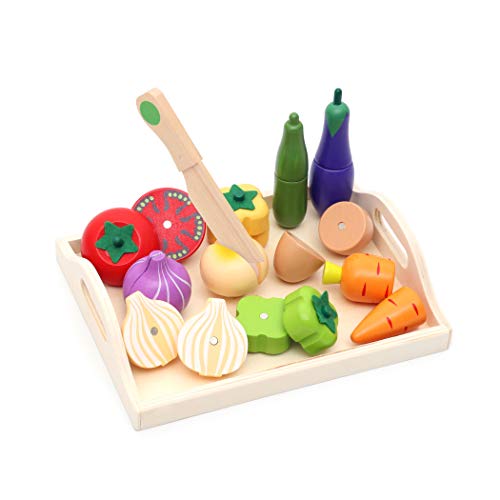 PEWMIUM QUALITY - Made of solid wood and painted in rich colors, not only brings the kids tons of fun, but also enhances their perception of colors and vegetables.BUILT-IN MAGNETS - Adhered by built-in magnets, more secure than velcro or other ways of adhesion. No need to use glue and no need to wor...
Read Reddit commentsView price 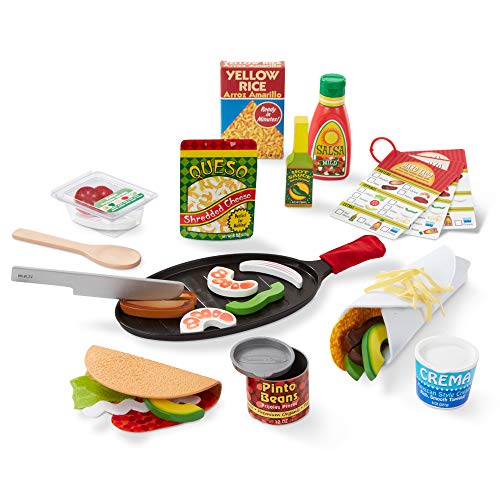 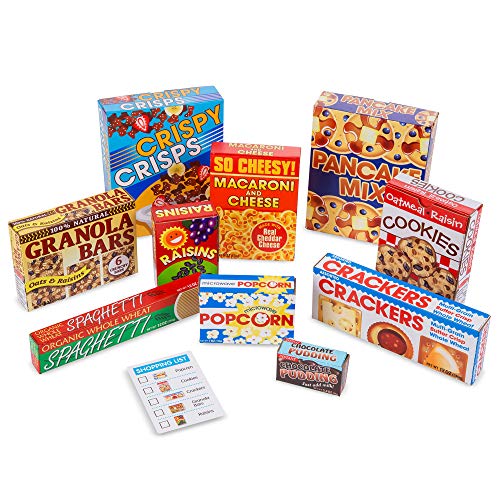 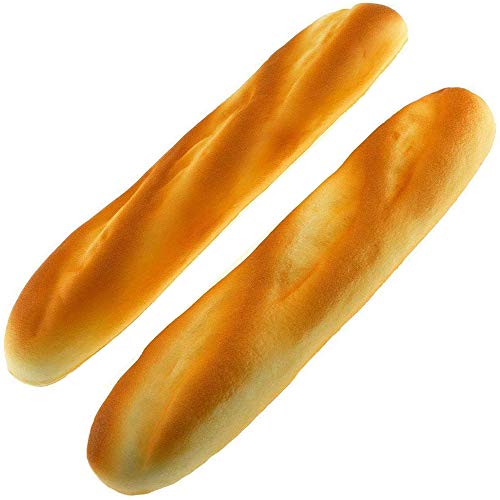 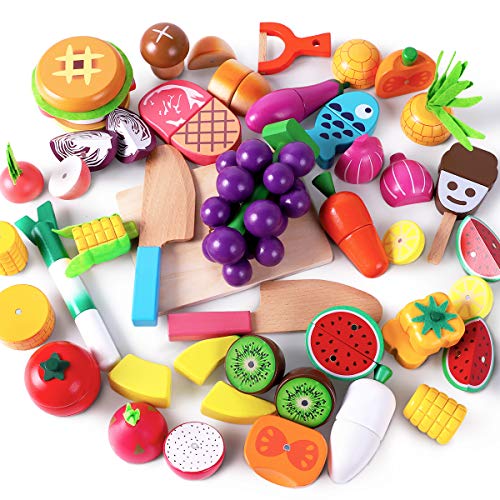 WOOD MADE – SAFER THAN PLASTIC MADE SETS. A creative pretend food cutting party! Fun toy for toddler girls and boys. Small pieces suitable for ages 2 and up. Rest assured our set includes fun and organic varieties of healthy food. Pieces contain magnets inside holding like pieces together that can...
Read Reddit commentsView price 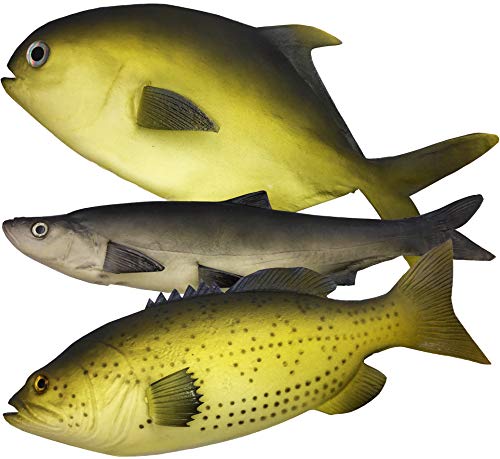 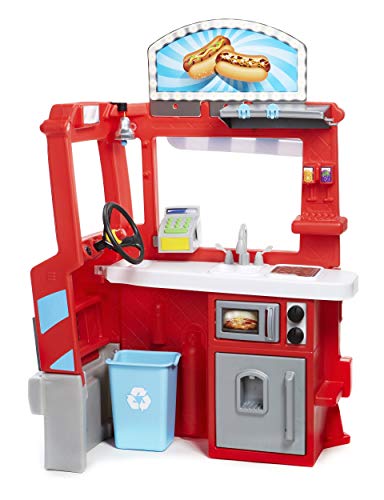 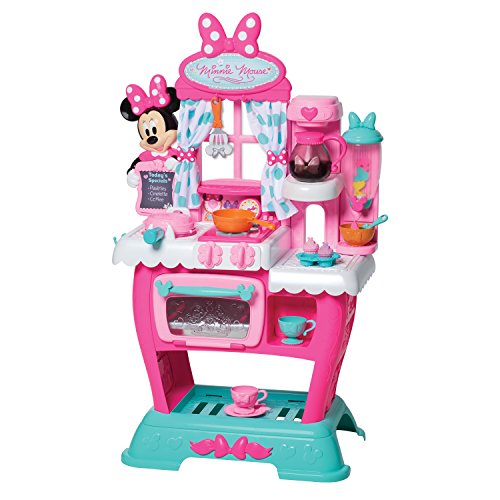 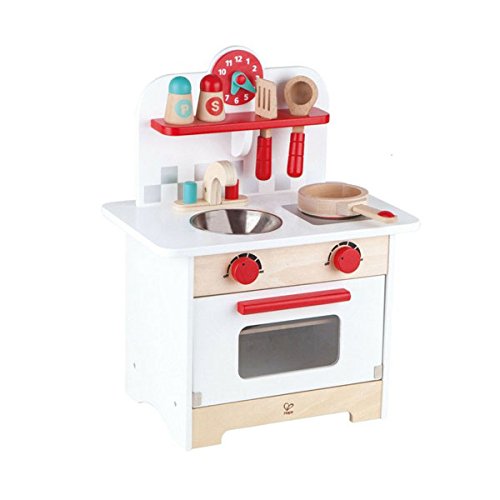 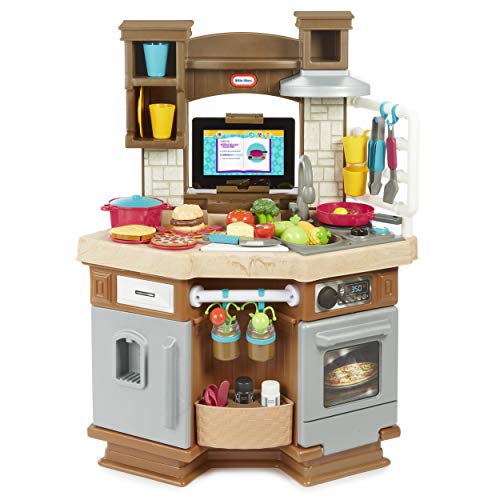 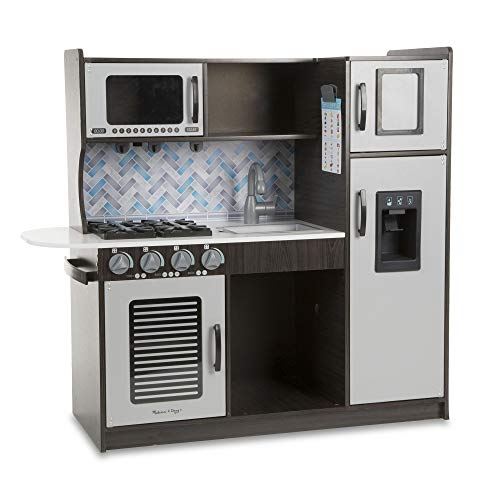 And a dippin dots maker for about thirty bucks on Amazon.

Mine was into tea parties at that age. I got her a really cute tea set and some fake cupcakes and cake. She liked to set it up with her baby dolls and have tea time. She is 4 now and still plays with it daily so it’s definitely been a toy that’s lasted. Hers is similar to this one https://www.amazon.com/dp/B07V9DQN5Q/ref=cm_sw_r_cp_api_i_Vk3NDbB23HGF3

She also really started to get into puzzles at that age too! So that could be a idea too. These are the kinds she liked at that age
https://www.amazon.com/dp/B000B9RHYC/ref=cm_sw_r_cp_api_i_mm3NDbET5BSF9

We got our 2 yr old this play kitchen for her birthday. It takes up maybe 3 feet of wall space and with the tablet integration/app I can see her enjoying it for many years. Right now she likes seeing what she’s playing with show up on the screen, but there’s a bunch of games with the app as well.

My daughter is 2 now but has been really into pretend play for a while. We got the IKEA kitchen because it's not too big and pretty sturdy. We also love the IKEA toy pan set and the cooking utensils. I added 2 lights that shut off by timers - one for "task" lighting and the other in the "oven". I like that the kitchen is pretty small but can also be set up at another height as they grow. These tubs from IKEA also perfectly fit in the shelves or directly under the kitchen for storage. https://m.ikea.com/us/en/catalog/products/art/70177255/

For the play food, she loves this magnetic food cutting set so much :
https://www.amazon.com/dp/B06ZZW6JG1?ref=yo_pop_ma_swf

Learning Resources also makes really high quality play food - and they are usually appetizing and whole foods instead of all pizza, etc.

Thanks so much! Just wanted to make sure. Also, your story is so beautiful, I teared up a bit! What a lovely family you have! &lt;3

Kay (7) loves singing. She's believes she's a princess, &amp; can sing to solve any problem. lol She sings Frozen songs at least a couple of times a week, since 2015! At this point, everyone in the house knows every word to every song. xD She really wants a karaoke machine.

Eugene (6) is recently getting into video games, particularly Minecraft. He's also loved cars since he was little(r). He has a bunch of little Hot Wheels that we got from the dollar store, &amp; he'd be so excited to get a track for his cars.

Little Lizzie (4) is obsessed with Minnie Mouse. When we asked her what she wanted for Christmas, she said "Minnie." Then we asked if there was anything else she wanted. She said "Pink Minnie." lol She also loves to play with my old play food from when I was a kid. She would be thrilled with this Minnie Mouse play kitchen.

Oh wow! I desperately want the Taco kit, but I’m not prepared to keep track of 43 pieces! Plus I won’t want to share with my kid...

Melissa and Doug Fill and Fold Taco And Tortilla kit

But the tiny kiddie Keurig is now officially on the list!

These are a few things we bought for my nephew when he was that age, and he loved them.

Sonya, Your Momma wouldn't tell you this but nobody likes to share but you'll be better off if you do. :) What little girl wouldn't love an Easy bake oven?

I love that New Sprouts play food. It's way more durable than the cheapie sets. We have the set where you can sort fruits and vegetables into the five color baskets.

I read on Amazon reviews that they sometimes sell that big set at Costco for like $20. Is that where you got yours?

EDIT: This is the set we have. Made by Learning Resources, which is the same company that makes the New Sprouts food line.

I second getting a wood one. We were lucky enough that my dad rebuilt the he made for my sister and I as a child. C plays with it so much! Then my mom bought the realistic pots/pans and other utensils to go with it. So many hours of play!

In addition we got a plastic shopping cart off of a buy sell group. You can get a little apron, oven mitts, etc if your little guy is really into it. C used an old cornstarch container and pretended to make coffee for us yesterday (just like she helps my mom do). It was so cute to watch her imagination go and role play.

I got it on Amazon. It was a bit expensive but I liked the versatility and that it looked like my kitchen. I think it's something that will last awhile so we can use it for future children too.

I also bought these accessories

I like the play food because it had a lot of variety of different fruits and vegetables (and other common foods too). It's helped me build his vocabulary.

We have this one. It is very high quality and also really compact, which was a deciding factor for us because of space limitations. R has been using it since about 1.5 years old and is still really into it. It still looks brand new (though she is admittedly easy on toys). I also just really like everything Hape makes so we also have the doll crib and doll high chair.

My son was 14 months last Christmas and the one Christmas present we've gotten the most use out of this year is his Little Tykes Food Truck. As we were putting it together I remember thinking "he's going to be too young for this right now". He immediately took to it and has yet to tire of it like he has with other toys. If you don't want to go full kitchen, I'd definitely recommend getting play food and kid sized kitchen items.

My MIL bought him pots, pans, &amp; utensils from IKEA that he likes more than the stuff that came with his truck. It's all smaller versions of their actual kitchen stuff and made with the same materials. IKEA also has felt food that's pretty cute.

My mom just bought him this play food for his birthday. It's really nice quality and is sized down for kid hands.

Haha no worries I noticed I worded it wrongly!

But $3-4 is not bad at all for 3 to 4 burgers jeez. Definitely can see why some people would prefer that but I'm a real big money saver so those few dollars count haha.

Also a tiger rolls are these (Those are from amazon I know it's not real it's just to show him) - https://www.amazon.com/R-FLOWER-French-Baguettes-Keyboard-Pillow/dp/B071R5W4YS

NZ must just have more expensive fast food. Also from what I know bread and a apple is way healthier then fast food

I'm probably way to late. But you can get 3 cheap fake fish at a good size on Amazon. FISH Also chunks of clear plastic that are used in vases are ideal when you need fake ice. Hope this helps

We want this the most out of all the things on Amazon. Babydude loves playing kitchen!

For outside play, our daughter loves her picnic table because she can bring her art stuff outside and paint there. She also has a tee ball set like this one. Bubbles are definitely a favorite, and we have a brick patio so she enjoys drawing with chalk. And, really, she just likes to play pretend. She will set up a beach ball and random toys and pretend she's at the beach with friends... or she'll make a pretend boat out of a box and "sail like Moana" on our lawn, haha.

For inside, my daughter draws, builds train tracks, plays with magnet tiles and Lego, molds play doh, paints, colors, draws on her dry-erase board, uses her play kitchen, plays "picnic" with her lovies, and dances to music.

Please surprise me. Used books/DVDs are fine, btw. Thanks for the contest!

mine, I called it first

As a man with 2 and 4 year old daughters and a younger sister who has the same gift-giving philosophy as you, I'm well qualified to answer this question. Here are the most annoying toys my children own.

Any kind of whistle/recorder/whatever. They'll absolutely love it, it's loud, and you can't take out the batteries. At my daughter's 3rd birthday, we bought some cheap plastic whistles to go in goodie bags for the guests and had a parade of toddlers running around the room blowing them at the top of their lungs. 10/10 annoyance factor.

A toy xylophone. Not quite as noisy as the whistle, but still pretty loud and the kid will like banging on it. If possible, go into a toy store and buy one (rather than online) so that you can specifically pick out the one that is most out of tune.

Nerf swords. My kids have a pair of these and they love hitting literally everything with them. Themselves, each other, me, the walls, the furniture, the pets. If you get hit in the right place it stings pretty good but they aren't dangerous enough to really justify taking away. 95% chance this ends with something broken or someone crying within 5 minutes.

This Melissa and Doug pizza party set. This one's nice because it's subtle. It doesn't look immediately annoying. But there are about 50 little wooden topping pieces, and those will end up all over the house, constantly.

Large toys that will take up a lot of space in their house/garage. For maximum annoyance, buy stuff like this multiple birthdays/Christmases in a row and watch them struggle to find space to put them. The last few gifts my parents got my kids were a trampoline (the little 4-foot indoor kind), a wagon, a bike, a toy kitchen set, and an easel. The amount of space that stuff takes up really adds up.