We found 22 product mentions on r/wallets. We ranked the 44 resulting products by number of redditors who mentioned them. Here are the top 20. 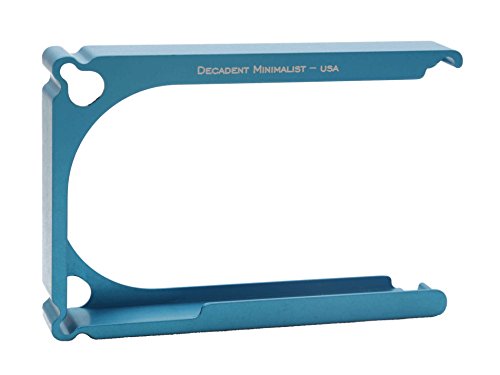 Sentiment score: 1
Number of reviews: 1
THE THINNEST MAGNETIC MONEY CLIP WALLET - We use the most wear-resistant layer of leather, trying our best to make the cowhide thinner while ensuring the sufficient wear resistance of the wallet, which makes our wallet become the thinnest magnetic money clip wallet -- Only 0.15 inches. Size 3.15" X ... 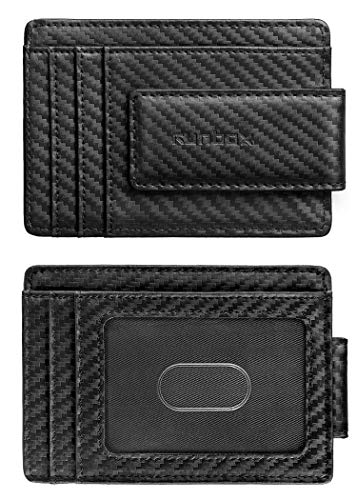 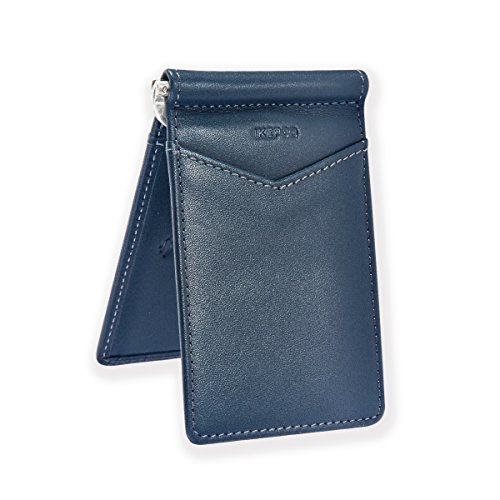 Sentiment score: 1
Number of reviews: 1
Organize up to 8 cards while being 2-3 times thinner than leather wallets - The thinnest most convenient package possible with no compromises.We custom produced the high performance Soft Shell material to achieve ultimate durability and waterproofness: Like crossing the properties of Kevlar and GORE... 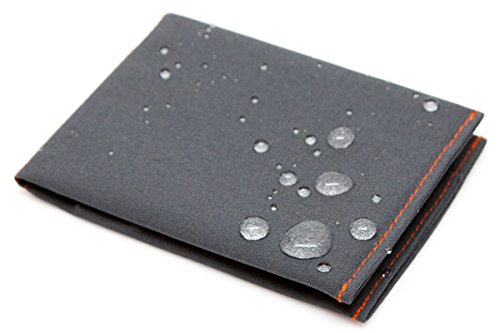 Sentiment score: 1
Number of reviews: 1
PATENTED. 12 MONTH WARRANTY - The SERMAN BRANDS Warranty covers any factory defects as a result from the manufacturing process of the product.SAFETY. PRIVACY. SECURITY - Our wallets are equipped with advanced RFID SECURE Technology, a unique metal composite, engineered specifically to block 13.56 MH... 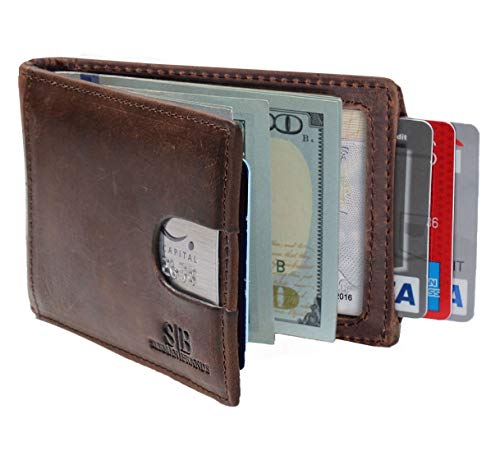 Sentiment score: 0
Number of reviews: 1
Carry up to 14 credit cards securely between RFID-resistant, stainless steel plates.Stash up to 8 bills on the internal cash clip.Secure your carry with a wrap-around, nylon strap.Adjust the space between the plates with a sturdy nylon strap for a custom fit.This high quality product is backed by a ... 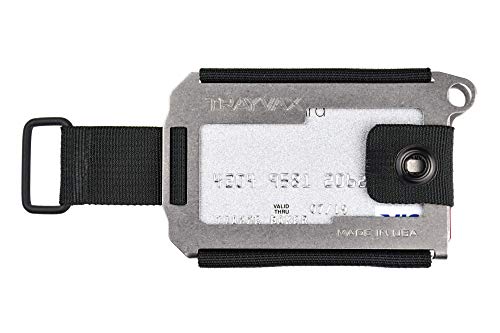 Sentiment score: 1
Number of reviews: 1
ImportedThe Secrid slim wallet. Special design credit card holder made from aluminium and leather.With a click all cards slide out gradually. The cards will not fall outA perfect mens wallet. No problem to keep it in your back pocket. No breaking, No bending.2 year full warrantyJust 14mm flat. Can h... 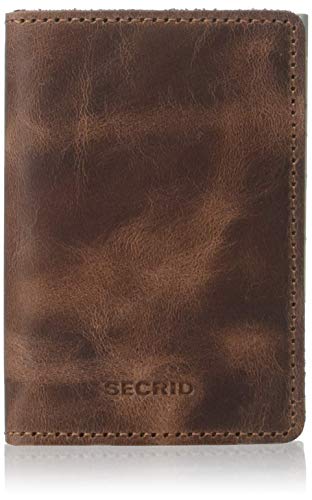 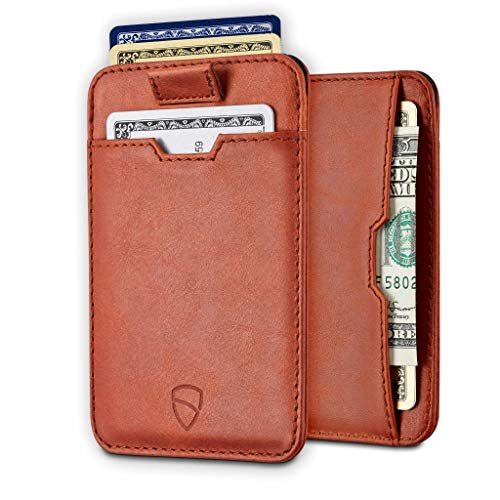 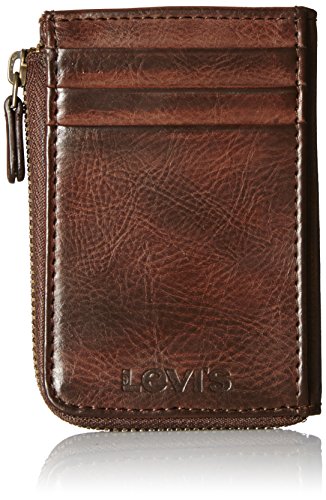 Sentiment score: -1
Number of reviews: 1
MINIMALIST - significantly thinner than traditional bifold walletsULTRALIGHT - weighs less than an ounce so your wallet never weighs you down or strains your backEFFICIENT - comfortably and securely holds 4-10 cards.DURABLE - strong polycarbonate and silicone parts that are built to lastPATENT-PROTE... 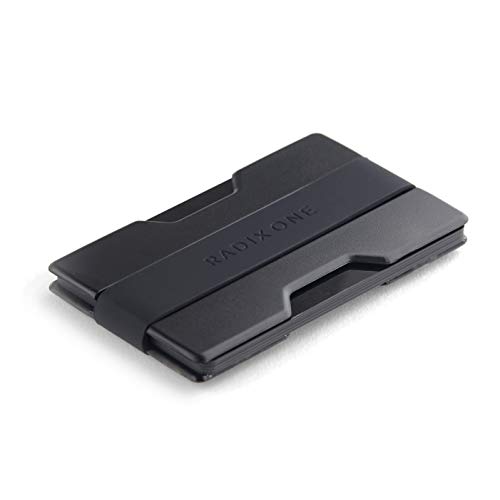 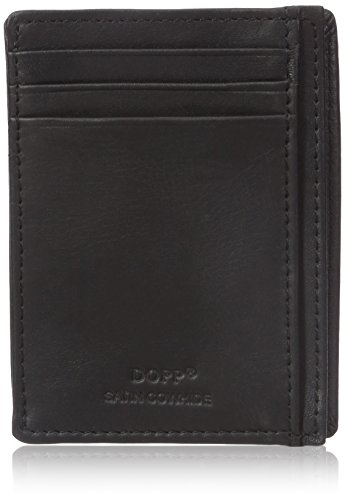 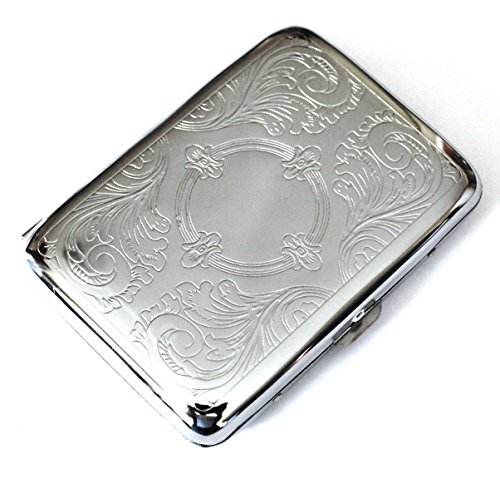 Sentiment score: 0
Number of reviews: 1
💳 FUNCTIONAL – VIOSI front pocket wallet is made from the genuine cowhide leather with magnetic money clip. Money clip wallet has 3 card slots, 2 larger slots and 1 transparent ID window. One side of the wallet includes an exterior magnetic money clip allows you to clip cash, bills, receipt or ... 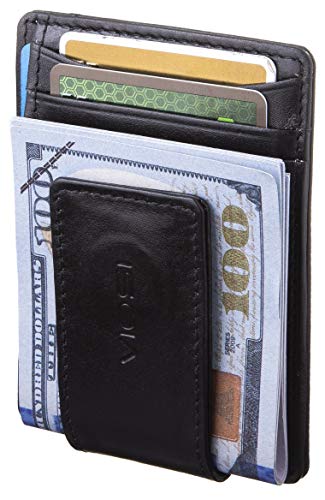 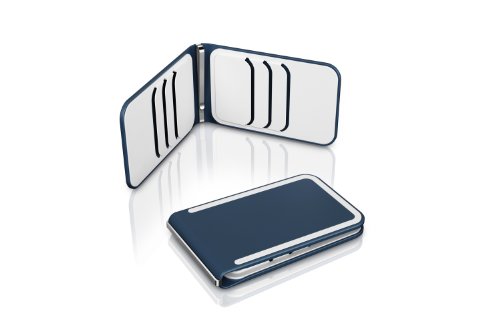 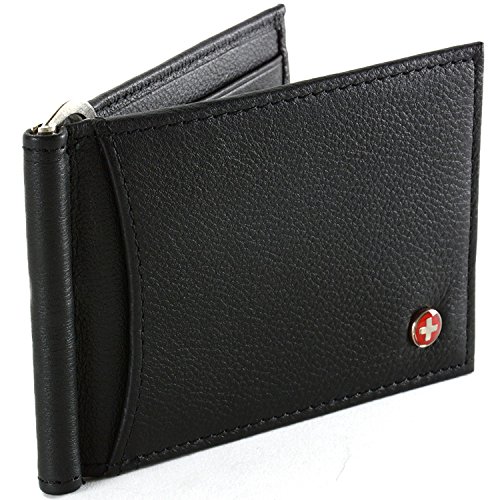 Sentiment score: 1
Number of reviews: 1
SIMPLE LEATHER BIFOLD WALLET FOR MEN - Our Small Bifold Wallet is what's going to replace all the fancy wallets you go through every year. Buy your next wallet for life! For the wallet minimalist, you'll appreciate the simple design; just two card slots on both sides and a long, bill compartment for... 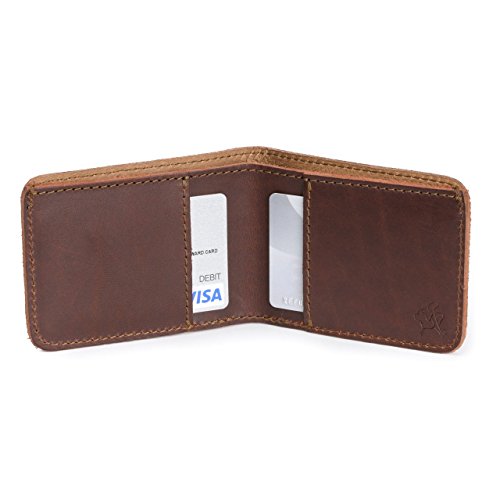 Sentiment score: 0
Number of reviews: 1
L-shaped wallet with quick flip flap for access to your most needed cardsHolds up to 30 cards in 5 card pockets, 2 hidden storage pockets, and 2 ID pocketsPockets lined with rubbery coating to prevent cards from sliding outConstructed of thin, light, and durable nylon microfiber; machine washableMea... 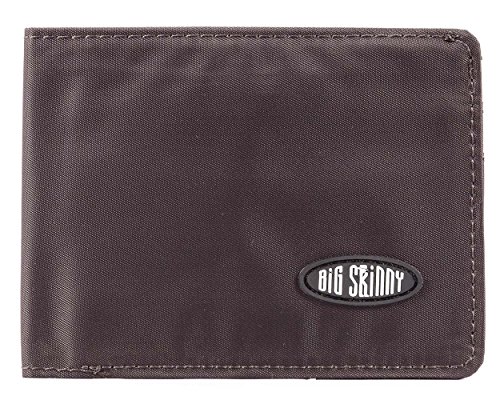 Sentiment score: 0
Number of reviews: 1
This Front Pocket Wallet is part of the Bosca® Old Leather Collection.Classic and elegant, this Front Pocket Wallet creates a warm, welcoming, and confident style.Leather's color is applied by hand-sponging vegetable dyes onto the leather according to a centuries-old Tuscan technique and then irone... 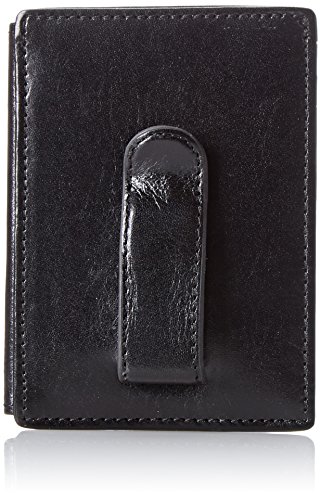 hey thanks for the reply i appreciate it, ive been online all day finding different wallets. its like a whole new world and apparently a hobby i have no idea existed. your wallet seems cool sorry you cant find it either, sucks that this feature isn't more common when its super useful.

ive found a few that seemed interesting that i can link if you wanna look at as well.
https://www.amazon.com/gp/product/B01LYZKL3O/ref=ox_sc_act_title_3?smid=A1FPFEIGXHUY0Z&amp;amp;psc=1

Vaultskin MANHATTAN is also a bifold and has a front pocket as well as banknote wide rear slot(which is super rare to find in a minimalist wallet too apparently, everything is either a money clip(maybe ill get used to it if its a nice wallet overall or worse a bungee cord on the back(which is super ew and a no from me dawg haha)


and out of that category i found the secrid to be very interesting, it has a spring slide for cards inbedded in a more traditional wallet form. tho carrying cash can still be a little tricky
https://www.amazon.com/Secrid-Slimwallet-Leather-Vintage-Brown/dp/B01B5AZN7I?ref_=bl_dp_s_web_7678500011

This has everything you're looking for. It's the wallet that I recently bought. I comes in 5 colors, my suggestion would be to get the "Cognac" color. I got the "Tan" color but it's a bit too bright brown for my tastes. The Cognac looks like a classic wallet that goes well with everything. Cheers!

I have the Vaultskin Chelsea &amp; it is my absolute favorite wallet. Nice &amp; thin, small, &amp; it holds 6 cards very easily. 2 in each pocket, you'll hardly notice it. Best of all, it's $22.

I got this wallet recently and I love it so far. It's very slim and I have 7 cards in it plus cash comfortably. It can fit probably 2 more cards easily. You can get a huge rebate if you buy it on their website and post pictures of it on social media. Kind of scummy, but hey a deal is a deal. Also they have other slim wallets that I like on their website.

The wallet I got.

Also just learned about www.mulecarry.com, which I think is a child company of Allett in some way.

If you're into all leather, I can recommend the Vaultskin Manhattan. Very nice wallet.

Slimfold Softshell is also nice. I have the micro and like it for outdoorsy situations: https://smile.amazon.com/SlimFold-Wallet-Gray-Orange-Stitching/dp/B01FYCXY4C/ref=sr_1_1?ie=UTF8&amp;amp;qid=1501525248&amp;amp;sr=8-1&amp;amp;keywords=slimfold+softshell

I also like this one by Huskk, which is a knock off of Slimfold but way cheaper (although not the same high quality material, just the same design): https://smile.amazon.com/Mens-Slim-Wallet-Microfiber-Minimalist/dp/B06ZZB49MM/ref=sr_1_4?s=apparel&amp;amp;ie=UTF8&amp;amp;qid=1501525269&amp;amp;sr=1-4&amp;amp;nodeID=7141123011&amp;amp;psd=1&amp;amp;keywords=huskk+wallet

This one isn't a perfect solution but it is pretty close. In my experience you can actually slide out the metal money clip. Then it would be pretty close to what you are looking for.

I've been rotating my other wallets with this Levi Zip Wallet for the past 4-5 years. I really like it a lot. I like the outside slot. Easier to retrieve to my Card rather than having to zip open the wallet first. But damn, that Bellroy looks hella nice. Might cop eventually

I've been rocking this RUNBOX for about 6 months now, best one out of a few I tried. And it's nicely priced:

I've got a Visconti Bi-fold wallet that has a divider and a little coin pouch. Love the shit out of it, I've even thrown it through the washing machine a few times on accident. Couldn't find it on their website though...

Get a cigarette case! I use this one: https://www.amazon.com/dp/B00NM0462S?ref=yo_pop_ma_swf . Cash fits perfectly in one half, cards in the other in a plastic 'photo insert.'

Borgasets and Dopp on Amazon look pretty similar to the one in the picture.

Im going to speak up since no one else has. I like Saddleback. I have maybe four or five of their wallets, in part because my wife steals my small ones. So I am going to give my review I suppose on the ID wallet since you asked for info on it.

https://www.amazon.com/Decadent-Minimalist-Mens-Aluminum-Wallet/dp/B00TRP1TAO?th=1 I just got one in black and it looks and feels good. There is a 12 card version and you can add a moneyclip card to the back. Sadly its a bit out of your price range, but if you find nothing else I'd say try it

have you tried money clips?

Cool, thanks for the info! I'm trying to decide between the Ridge and the https://www.amazon.com/Trayvax-Axis-Wallet/dp/B01BN5VGTO. Ridge is cleaner but pricier, trayvax has more features but looks worse and doesn't have quite the organization of the ridge.


All the metal wallets I know are RFID blocking. But I don't know whether they specifically made them that way or they just use say stainless steel therefore they just say it's RFID blocking when a quick google search told me SS is not super effective as for example aluminum foil. So you may want to consider finding out more about that and maybe those wallets will still work for you even if it says RFID blocking? But I still don't understand why you don't want RFID blocking thought tbh.