We found 1 Reddit comments about Andy and the Airwave Rangers [VHS]. Here are the top ones, ranked by their Reddit score. 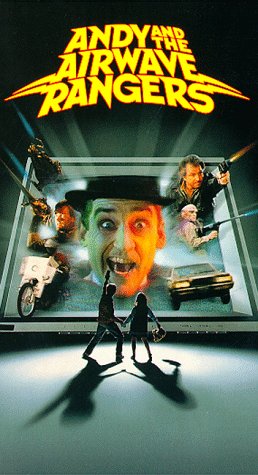 Let's also have a look at the actual trailer: https://www.youtube.com/watch?v=bGI-iLTdNn4


So, many years ago I found this movie as a VHS tape in a pawn shop. My brain was never the same.


Some of you, being bad movie aficionados might be a bit confused as to why you're seeing clips from other classic films. A quote from wikipedia might illuminate: "The film is referred to as a full-length "cheater" in that it takes advantage of film highlights gleaned from previous Roger Corman films Space Raiders, Wizards of the Lost Kingdom, Deathsport, Chopping Mall and Wheels of Fire."


See, the titular character has been sucked into his TV by the power of a magical video cassette, cue 70 minutes of him being awkwardly spliced into other bad movies and kool-aid commercials, between befriending TV static and rescuing his sister from a rapping color thief.