Reddit reviews Bias: A CBS Insider Exposes How the Media Distort the News

We found 12 Reddit comments about Bias: A CBS Insider Exposes How the Media Distort the News. Here are the top ones, ranked by their Reddit score. 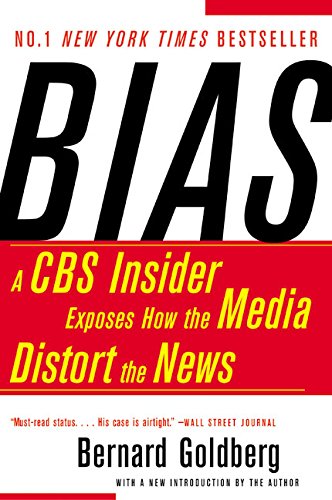 12 Reddit comments about Bias: A CBS Insider Exposes How the Media Distort the News:

Bernard Goldberg, a 28-year veteran CBS news reporter and producer, wrote the book on how biased CBS News is. About a decade later Sharyl Attkisson, formerly an investigative correspondent in the Washington bureau for CBS News and a substitute anchor for the CBS Evening News, reaffirmed it in her book Stonewalled. She alleged that CBS News failed to give sufficient coverage of Obama controversies and stonewalled her investigations into them.

Bias: A CBS Insider Exposes How the Media Distort the News January 21, 2003
by Bernard Goldberg

Stonewalled: My Fight for Truth Against the Forces of Obstruction, Intimidation, and Harassment in Obama's Washington – November 24, 2015
by Sharyl Attkisson

What's the ratio amongst folks who don't choose (A) religious material (B) romance novels (C) children's books (ala "Harry Potter") as their reading material?

Just for kicks, my recent recommendations:

This has been a long time in the making.

This was published way back in 2003 before Fox News was the giant bullshit mountain it is today- but they slowly rewrote the narrative to say that ALL news outlets are biased against conservatives. This isn't new at all. What you see today has been at the very least- ten years in the making.

Ideally the role of the mainstream media would be to aggressively pursue the truth regardless of ideology. We have never had an ideal mainstream media, it has long been filled with ideologues pushing their agendas.


While I'd not say they are the enemy of the people exactly, they certainly are not serving our interests.

Having a desire to sell ad space is not mutually exclusive with having another agenda. I would recommend the book Bias: A CBS Insider Exposes How the Media Distort the News by Bernard Goldberg


Goldberg is a 28-year veteran CBS news reporter and producer.

Bigger question: have you ever actually read / watched CNN? Normally an opinion piece is labeled as such, to indicate to readers content that is not necessarily reflective of a news organizations' own values. John Blake is an official CNN Enterprise writer / producer, not some fringe opinion like you're waving it off as. CNN is literally riddled with this garbage, lest we forget the snickering CNN-host Don Lemon, the miserable tit CNN Analyst Keith Boykin, and pushing app notifications for fucking said opinion pieces?

A great place for you to start is Bernard Goldberg's "Bias" circa 2003, as I have a feeling you fall into this category. You simply cannot comprehend that the media, let alone 50%+ of it, has any sort of leftist bias.

Just to help others see how middle of the road the New York Times is: Republicans Are the Real Extremists

This is a pretty interesting book about CBS bias. The way Sharyl Attkisson was treated is another example of their bias.


&gt;In his nearly thirty years at CBS News, Emmy Award winner Bernard Goldberg earned a reputation as one of the preeminent reporters in the television news business. When he looked at his own industry, however, he saw that the media far too often ignored their primary mission: to provide objective, disinterested reporting. Again and again he saw that the news slanted to the left. For years, Goldberg appealed to reporters, producers, and network executives for more balanced reporting, but no one listened. The liberal bias continued.

I think that most mainstream U.S. media organizations do have a pro-government (and usually left-leaning) bias, but I also think that many conservatives would say that it is, for the most part, unintentional (as most biases are). As a right-leaning person myself, I wouldn't characterize it as a conspiracy, just a natural outcome of reporting the news from your perspective without trying to seek out (let alone include) a conservative's or libertarian's perspective on the story.

For further reading on this, I suggest Bernard Goldberg (formerly of CBS) and his book Bias: A CBS Insider Exposes How the Media Distort the News. I know the title is a tad sensationalist (gotta sell books somehow), but he makes his case with plenty of anecdotes and personal experience from his career in the news industry.

&gt;Especially when you consider its closest competitor at least tries to give both sides of each debate, even during editorial segments

You obviously don't watch FoxNews and, instead, get all your info about them from other people. Given that, it's understandable why most of what you said above is wrong.

I'm not going to go through it all again, point by point. Read the experts. They make the case far better than I could anyway. They're everywhere.

As a Conservative I always saw Fox News to be closer to the center, which means it's not left-leaning, and that upsets many.

There's a good book that confirms a bias in media from someone who was knee deep in it for 30 years called "Biased".