We found 12 Reddit comments about Detroit: An American Autopsy. Here are the top ones, ranked by their Reddit score. 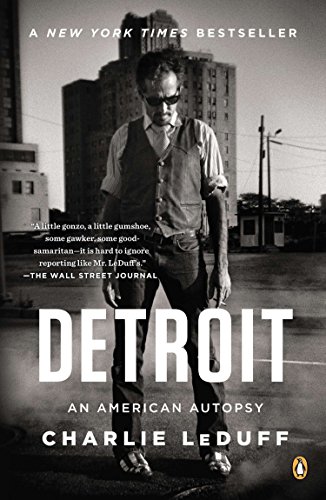 You might want to read this opinion piece of hist. His book is about the current state of Detroit and his families relationship with it. He moved back to the area as an adult. He goes through the whole sorry state in detail and ends up quiting his newspaper job because the managers changed one of his stories to be more pro-management anti-labor than it was. He talks about his families experience with the Detroit riots and than discovers that his grandfather "passed" as white when he moved to Detroit from Louisiana.

It wasn't only the Dems - everyone had a hand in the destruction of Detroit.


Great links for books on the subject:

Charlie LeDuff is the only reason why I watch Fox 2 news. His brand of journalism is what's needed in these type of stories.

Detroit: An American Autopsy by Charlie LeDuff. It's phenomenal.

Not sure what the laws are for mailing beer, but a growler from Kuhnhenns Brewery is never a bad gift. Maybe a book from Detroit journalist Charlie LeDuff?

For those interested in learning more about Detroit, I highly suggest "Detroit: An American Autopsy" by Charlie LeDuff. It gives a very honest and insightful look into Detroit

This is a good book. From the point of view of a reporter living and working in Detroit.

Well I don't really know much about Detroit, I have only been there multiple times and have read the following books cover to cover.

Which is why I kind of thought everything I said about the city can be objectively proven as true. But what do I know?

Have you ever been to Detroit? (I lived there in the 90s)

Do you know its history, and do you know that it is a city that is more than half empty, having had close to two millions inhabitants at its peak, but having only about 680,000 citizens as of now?

Are you aware that the city is in bankruptcy, having defaulted on its debt, pension funds, etc.?

Do you know that many of the "fuckheads in charge" are, in fact, african-american, and that the administration has mostly been that way since 1968? (Not that you cannot have fuckheads of any chosen denomination, but that should give some pause in considering their enthusiasm in getting rid of 'the blacks' as you put it),

If not, you may want to read up about it ("Detroit, an american autopsy") and in the process find out that framing "the fucking problem" may be harder than you think.

Nenshi is quickly becoming another Kilpatrick.

If anyone cares about the future of Calgary, I highly recommend this book which describes in much gory detail what happens when incompetent AND progressive politicians get their paws on the public money: