We found 5 Reddit comments about Kaytee Chinchilla Bath House, Assorted Colors, 9.25''X9''X8.5''. Here are the top ones, ranked by their Reddit score. 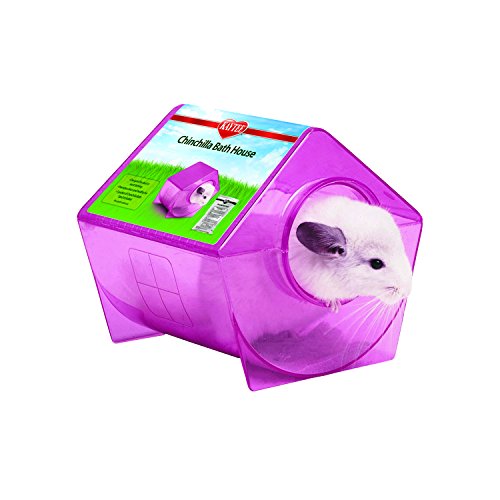 My chinnies have a dust bowl that they sell on amazon like this one https://www.amazon.com/dp/B0002AS5M8/ref=cm_sw_r_cp_api_dPqJyb1Y0FHSN. It hooks on to the side of the cage and can be removed. Looks kinda like a big plastic birdhouse lol but they love it. It seems to trap in most of the dust although some shoots out on occasion.

Yes, I use one of these.

If you don't want one quite so large, you can also use a chin bath house like this: http://www.amazon.com/Kaytee-Chinchilla-Bath-House-Colors/dp/B0002AS5M8. I've had mine for 4 years now &amp; it's just now starting to come unglued. Bath water gets changed daily &amp; it goes through the dishwasher weekly.

1] the room your chinchilla cage is in should be kept below 70F. if that means having to run your AC every day, then that's what you'll have to do. humidity is slightly less of an issue if you keep the dust bath available inside the cage 24/7, but you'll still want to keep the room relatively dry.

2] i don't know what you've read, but my two girls definitely didn't read the same information. they are LOUD, especially late at night. the wheel is noisy, their chewing is noisy, their general bouncing around the cage is noisy [lilac think it's fun to make her cage shake and rattle].

2.5] i don't recommend getting any pet if it's not 100% okay with your landlord. if you wanted to adopt a chinchilla from a rescue, many places wouldn't even approve your adoption application without talking to your landlord first, because they don't want the chinchilla to end up right back in the rescue when the landlord discovers you've snuck a pet into your 'no pets' rental. what will happen if your landlord decides she's really not okay with it? will you get rid of your chinchilla? will you find pet-friendly housing and move? will you try to sneak your chinchilla into another 'no pets' rental?

3] i've only ever owned female chinchillas, so i can't really say anything about males based on personal experience. i'm happy i never have to deal with hair rings, though.

4] chinchillas are crepuscular, leaning toward nocturnal. my girls sleep mostly during the day, but they don't sleep the entire day. they drift between napping and short bursts of activity. they're most active at night, between 10pm and 5am.

5] i use these dust bath houses, hung up on the wall of the cage. they have little hooks for that purpose, but they break off easily, so i use bolts and washers to secure them instead. unfortunately these houses are made of plastic, but i've yet to find a suitable non-plastic option that can be hung in the cage the same way.

Levels depend on size of cage really, so it is hard to say. Bare minimum size would be 3'x3'x3'. Preferred brand would be Ferret nation (you will get this from most everyone because it is a completely metal cage with awesome features). Wheels are great to be able to clean up around the cage or to move chinchillas that are frightened of vacuums. AND DON'T GET PLASTIC CAGES OR ACCESSORIES! Plastic is not something anyone should eat. And chinchillas chew EVERYTHING in a cage.

I'm just going to write a list of things you should have in general for 'accessories.' And I'm a college student, so be prepared to hear about bargin stuff.

&gt; Food : Avoid pre bagged food. It's expensive.
&gt;
&gt; Hay : I just get a bale of hay from the feed store (where farmers get their food for their barn animals.) Way cheaper than a little bag at the pet store.
&gt;
&gt; Hay manger : I personally don't use mine, It's a pain to refill, and my chinchillas eat so much hay so fast anyways.
&gt;
&gt; Huge ass waterbottle : Plastic is fine. They won't be able to reach it.
&gt;
&gt; Litter pan : You can just use a small cake pan, I personally use [this](http://www.chinchillathings.com/for-the-critters.html) and to hold it down to the size of the cage I use [these](http://www.amazon.com/Brands-Bankers-Clasp-4X6-1-Silver/dp/B004E3HYW6/ref=pd_sbs_op_5).
&gt;
&gt; Litter : I use something like this.
&gt;
&gt; Dust Bath : Don't cheap out if you want them to have super nice soft coats. Lots of people use blue cloud. [I haven't used this site, but it seems to be the best price for your dollar for a big bag of it.](http://www.chinworld.com/Merchant2/merchant.mvc?Screen=CTGY&amp;amp;Category_Code=CW02)
&gt;
&gt; Bath House : You can just use a dish for them to bathe in. I personally use this because it keeps the dust from flying everywhere. Plus, since less is going all over the place, you aren't wasting as much dust. Plastic is fine as long as you supervise them while they use it. They should have 10-15 minutes of bath time 3 times a week. Don't leave it in the cage or else they will piss in it to mark it.
&gt;
&gt; Wheel : You can go buy one large enough for a chinchilla for about 150 bucks, but I am not the kind of girl that will spend more than 20 on a stupid wheel. So I am currently in the process of making my own! [Here is a post of mine with a few options on how to make one.](http://www.reddit.com/r/chinchilla/comments/1degot/could_use_some_help_on_making_my_own_chinchilla/) Just keep in mind that the wheel needs to be 15 inches, and if you do end up going out to buy one, don't get one that does not have a solid bottom. Chinchillas can break their feet if it gets caught.
&gt;
&gt; Granite stone : To keep them cool. You can possibly get a free/super cheap slabs from a place that cuts granite counters and stuff. They have no use for the small pieces anyways. I personally just went ahead and bought a couple from the pet store though, because I am picky on how my cage looks.
&gt;
&gt; Hammocks : I personally make my own because their so easy to make and WAY cheaper. Why pay 15 dollars for a hammock that might get chewed so bad that you won't be able to use it in a week or two. Plus, I like choosing what colors. Keep in mind the material. Fleece and flannel are fine because they do not ravel. Remember if it unwravels, and the chinchillas want to eat it, you might come back to a dead chilla.
&gt;
&gt; Chews : Get a fuck ton of them. Seriously.
&gt;
&gt; Treats : Alfalfa, raisins, apple slices. Just give them tiny bits. The reccommended treat allocation is 2 raisins a day if that gives you any idea.
&gt;
&gt; And chinchillas love to run through tubes during play time.


And don't bother with the huge ass chinchilla ball. People call them death balls because chinchillas tend to over heat because their owners consider that their daily play time and will leave them in there for an hour or two. I have one when I only had one chinchilla, and he didn't want to touch me. He really enjoyed it, but I had a close eye on him the whole time. Every 10-15 minutes, I would bring the ball to his cage, and if he didn't hop out, I would let him roll around some more. He loved running into the cat and tormenting her. XD