Reddit reviews New Fix-It-Yourself Manual: How to Repair, Clean, and Maintain Anything and Everything In and Around Your Home

We found 9 Reddit comments about New Fix-It-Yourself Manual: How to Repair, Clean, and Maintain Anything and Everything In and Around Your Home. Here are the top ones, ranked by their Reddit score. 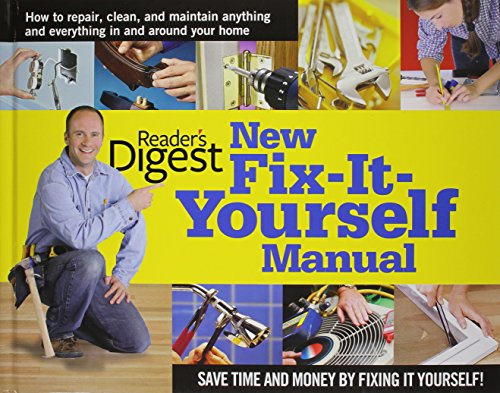 9 Reddit comments about New Fix-It-Yourself Manual: How to Repair, Clean, and Maintain Anything and Everything In and Around Your Home:

I like Reader's Digest. Well written and designed for people without a lot of experience:

Nearly everything you want to do, you can find a video for. But I've gotten a lot of mileage out of these books:

I've been doing my own home maintenance and repair for about forty years, and I think these Readers Digest books -- here and here -- are very good. I've used them through multiple editions, and I bought them for my son-in-law when they bought their first house.

Some specialized topics (like gas fireplaces) receive only the most superficial treatment, but that's inevitable in books like these. One thing you'll learn is when to try something yourself and when to call someone. For instance, I've hooked up gas stoves and dryers, but when it comes to working with the gas lines themselves, I'd rather pay someone who knows what he's doing. And so far I haven't asphyxiated anyone or blown anything up.

Anyway, those are the books I've recommended to quite a few people. Good luck.

&gt; This post is EXACTLY what I need and what I was looking for.

I kind of thought so.

Keep in mind with things like building (woodworking, carpentry, electrical, plumbing etc) -- I'm not saying you need to become some "master" of any of it, not even in fact to the level of "journeyman" or "apprentice"...

Rather I'm saying even just 12 year old kid-level "fucking around" -- being able to semi-competently pound some nails with a hammer, confidently cut boards with a hand saw (and power saw), drill some holes, replace an electrical outlet or swap out a sink faucet, etc.

--
In addition to "boys" activity books... which would be like "primers" for someone just learning how to read; well once you've done say 1/2 of the projects/activities in that "Dangerous Boys" book...

You pick up something like one of those "Reader's Digest Fix It Yourself Manual" books -- lots of pictures and LOTS of (simple/basic) advice on repairing things around the home (or even apartment).

--
&gt;Basically I was raised to be nice.

Basically you were raised as a GIRL -- or worse, a wussy-mangina.

(No offense intended by the way -- and you're hardly alone in that -- much of your generation is like that, even boys WITH fathers &amp; "intact" families... it's just the "paranoid helicopter parent" way.)

--
IMO only way to fix it is get out there and start DOING some of the "dangerous" (but not really) stuff that your (ignorant, idiotic, female -- but I repeat myself) mother prevented you from doing.

Get a book on basic home maintenance and repair, like this one: New Fix-It-Yourself Manual: How to Repair, Clean, and Maintain Anything and Everything In and Around Your Home https://www.amazon.com/dp/0895778718/ref=cm_sw_r_cp_api_mEEnzbVHQQD74

And get a fire extinguisher for your kitchen!!

Get yourself a copy of this

Youtube is great, it's helping me remodel my bathroom. As far as books go, (hey the power might go out), the Reader's Digest book is a great thing to have around.