We found 2 Reddit comments about ProSelect Stainless Steel Coop Cups — Versatile Coop Cups for Pet and Animal Cages, 16-Ounce. Here are the top ones, ranked by their Reddit score. 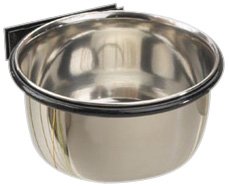 Perfect for pet and animal cagesEasily and securely attaches to a cageRemoves easily with the twist of a wingnutMade of durable, easy-to-clean stainless steelAlso available in 8 oz, 26 oz, and 64 oz sizes
Check price on Amazon

Couldn't hurt. I have a bowl that screws to the side of the cage so he can't tip it over. Something like this: https://www.amazon.com/ProSelect-Stainless-Steel-Coop-Cups/dp/B000GDVUE6

Feeding: Some dogs gobble their food up and you can limit meals to 15-20 minutes. Other dogs self limit their food. If they've had what they think is enough, they won't eat anymore until they're hungry. My pup is like that and we leave his food out 24/7. We tried on schedule, but he still would skip 1-2 days of meals.

Walking or lack of: Normal. Keep trying to get him moving with treats. I'd teach him touch. If the treats are good enough, it should get him walking. It's also a good intro to loose leash walking. I wouldn't pick him up unless you want to continue to pick him up (I assume you don't).

Crate Training: Keep working on it. A lot of dogs, especially those that are very attached might only become "crate tolerable". They'll always want to be around their humans more than a crate. Some more independent dogs love their crates. It'll depend on the dog. Where is his crate? For the first few months, we slept beside the crate or put the crate beside the bed. It helps calm down the pup especially since he's so young. I would not walk him in the middle of the night. It might become a habit. You definitely don't want to encourage that.

Xpen: That's normal. The xpen, for lack of better words, can be too freeing. Lots of space make some dogs feel uneasy. Our pup never did well in an xpen but relaxed in his crate. Our pup is over a year old now and we have only used the xpen as a gate or blocker. Whenever we leave, our pup goes in his crate because he does better in the crate (he also learned to climb out of the xpen at 3-4 months old). Unless you REALLY need to use the pen, I'd just have the pen there and open and use the crate when you need to leave. If you're worried about water access, buy a few of these: http://www.amazon.com/gp/product/B000GDVUE6/ref=s9_acsd_hps_bw_c_x_1. They're bowls that just attach to the crate. We have 2 permenantly inside our pup's crate.