We found 14 Reddit comments about Sword of Destiny (The Witcher). Here are the top ones, ranked by their Reddit score. 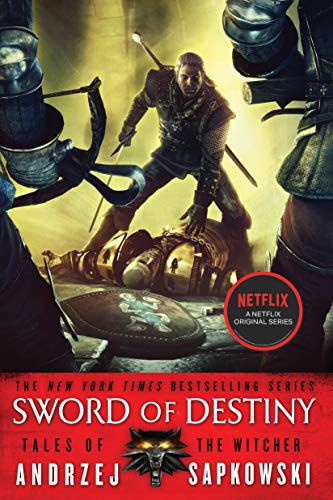 If anyone wants to start reading The Witcher novels I made a guide over on the "Featured Character" comment section that I'll repost here:

Whole lotta reading recommendations in this thread. May as well throw my two cents in.

The First Law series by Joe Abercrombie. If you're into Guts' introspective-man-of-violence-looking-for-his-place-in-the-world-thing I'd think you find Logen Ninefingers to be an interesting character. If you're into audiobooks then I highly recommend checking out the audiobook versions. The guy reading them is practically a voice-actor.

If you're interested in them, the stories are all in the process of being translated to english. There are two books of short stories, and 5 books in a saga. The 2nd to last book is coming out this month, and the final book is due next year.

Here are the two short story collections: The Last Wish, and Sword of Destiny.

The US covers are kind of crap compared to the UK covers, but it's probably cheaper/faster for people in the US.

I've been reading the Witcher Saga. Seven books in total; the English translation of the final one is out next month. They aren't the best books ever written, but they are solid fantasy stories with a lot of variety. There are elves, dwarves, halflings, gnomes, shapeshifting metallic dragons, a wilderness full of monsters, and roughly the same level of magic as the Forgotten Realms. It could easily be somebody's D&amp;D campaign setting.

The first two books are short story collections, and after that a long story arc begins that delves more deeply into politics, with multiple character viewpoints. I'd recommend the first two (The Last Wish and Sword of Destiny). They're fun, witty, self-contained that slowly develop the main plot in the background.

The last story in SoD describes how has Gerald and Ciri met, and there's one about her parents.

I was without internet entirely for a week, just got back at 6am Saturday, played games most of the day then fell asleep for 12 hours at 5pm. I've just played games all day today and have yet to study still. Since I'm doing only my courses I have a reasonable 169 words to review on memrise but I've just been putting it off.

I just bought Recettear on recommendation from /u/Uraisamu since it's $5 on Steam right now. It's downloaded but unplayed.

I got the new 水曜日のカンパネラ album UMA but I'm feeling kind of meh about it. It's only seven songs and the only song I really like is チュパカブラ and it doesn't include COLORHOLIC even though the music video came out before ツチノコ which is on it. I'm sure I'll grow to like it though.

Tonight I'll do my reviews and either play some Recettear, watch some let's plays or read the second part of いじめられっこの俺がクラスごと異世界移転した.

Over the last week I spent pretty much all my free time reading the second Witcher book instead of doing any internet-related things. Man it's made me want to read more of those and play the DLC for 3. I'm becoming more interested in Witcher lore than Warcraft lore.

EDIT: Forgot to mention that I'll be in NYC for a work conference I've been dreading for months this Saturday to next Wednesday. I might have time to do memrise reviews, but I won't stress over it too much if I don't. After that I'll be done with trips and I'll be back to normal life for the foreseeable future, hooray!

Then read them in English? Assuming you're American:

Sure, a couple notes while I'm downloading BaW :)

The book order is thus:

The Time of Contempt

The Tower of the Swallows

The Lady of the Lake

There's no official english translation of the last book yet, but the one I've linked is the best fan translation I've found. It's the one I read, and I honestly would have had no idea it wasn't a "real" edition if I didn't know better. Fantastic work.

There's also A Season of Storms, which is sort of a midquel for the series. But it was written in the last two years, has no bearing on any of the game's canon, and contain some minor potential spoilers for later books since he expected his readers had finished the series at this point. I recommend you ignore it for now, and if you decide you want to read it down the road pick it up after the series.

The first two books are a short story collections. The series is in chronological order, but the actual novel arc doesn't begin until the third book. Definitely don't skip the first two though, they set up important characters and events in Geralt's life prior to the novel arc beginning.

Lastly, if you really can't be bothered to spend a bit on the amazon paperbacks here's a link to all of them in epub format. I can't vouch for the quality of the fan translations in this pack, nor do I recommend this format. Buying the books supports the author and reading a book is still easier than reading on a tablet in my opinion.

Good luck on your journey into the Witcher!

P.S. - Oh, here is the Witcher 1 recap video I mentioned. DO NOT WATCH THIS until after you finish the books. It will spoil the climax of the series and ruin your reading. You can buy the game dirt cheap if you can handle a playthrough on PC, but you really won't miss a ton of important info if you skip it. I don't want to spoil the end of the books either, but essentially the second and third game don't rely on the first one at all aside from knowing cursory details of the first game.

Yes, you can play it without having played 1 and 2. The Witcher games from minute one are sequels to the books by Andrzej Sapkowski. So even in the first game you're introduced to characters for the first time, but they react to Geralt as if they've known him for years, so you're just kind of thrown into this already running legacy of a character.

Honestly, if you wanted the backstory before playing witcher 3. I'd read the books (or listen to them in audiobook form), it gives you A TON of context to the game and you'll constantly recognize characters and names from Geralt's early adventures in the books.

There's this animation which covers the events of the books, The Witcher 1 and The Witcher 2, so you could watch this after reading the books to prepare yourself for witcher 3's world state.

Green man gaming is sold out of the expansion pass codes, but you can get the base game for $22 here.

If you like it, you can buy the expansion pass on steam for 25 bucks, which is two expansions, the first is about 8-12 hours of content, the second is almost an entirely new game, easily with 25-40 hours content.

I can't explain to people how much I love this world and The Witcher 3 especially. If you like fantasy settings, this is a must play, and I bet that if you get into the game, you'll want to explore the books, and potentially play through the first two games as well.

If you're interested, here's the chronollogical order of the books (with links to buy them on Amazon):


If you want to know more about events and characters present in games (Ciri, Zoltan, journey mentions in B&amp;W) read Witcher saga from Blood of the Eles onward as said here