We found 3 Reddit comments about The Biology of Moral Systems (Evolutionary Foundations of Human Behavior Series). Here are the top ones, ranked by their Reddit score. 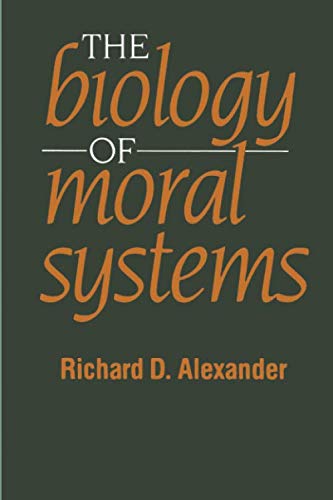 You might be interested in reading The Biology of Moral Systems (I've just started reading it). It tries to look at how evolution built human morality from ground up, with the specific goal of mitigating existential risk (nuclear war). There are other books like it but most are popularizations; this one seems fairly rigorous.

edit: maybe Ibn Khaldun is not an example of 'group selection' strictly defined but you get the idea...

&gt; What are some popular books on atheist morals that atheists live by?

Another strawman where one attempts to argue that atheism is anything more than a position/belief in the existence of God(s)? Really lightning?

However, as an atheist, or one that is not tied to a specific Religious text(s) from which to derive morality, I will start with popular books that I have rejected as a source of a sustainable and workable morality against the moral precept of: On a societal basis, reduce actual or potential harm and pain and suffering (evil) and increase actual or potential happiness (good):

&gt;Values only work if you truly uphold them all the time.

Nonsense, all humans work with situation-dependent evaluation. There is no absolute ethical value that does not have a "but under these circumstances" exception (which in itself is dependent on the individual). In addition to that, values can change over time. Machines are rigid, humans are flexible, which is necessary for adaptation and survival in a world with endless situational variations.

&gt;Will you teach your children this absolute egotism

As I find it morally disagreeable to create life, I long ago decided not to have any children. But if I did, I would definitely teach them to look out for themselves first, wouldn't you? What parent would want their child to sacrifice itself for the parent's sake? Parenthood means sacrifice, that's why nearly all animals fight to the death to protect their brood.

The individual might be able to choose, but the whole of the species has a direction of its own. Egotism is an extremely positive trait for survival, that's why all species have it. Your best bet for improving selflessness among humans would be to support genetic manipulation.

If you're interested in a much better and much more detailed exposition, I recommend The Biology of Moral Systems by Richard Alexander.