We found 20 Reddit comments about Esbit Ultralight Folding Pocket Stove with Six 14g Solid Fuel Tablets. Here are the top ones, ranked by their Reddit score. 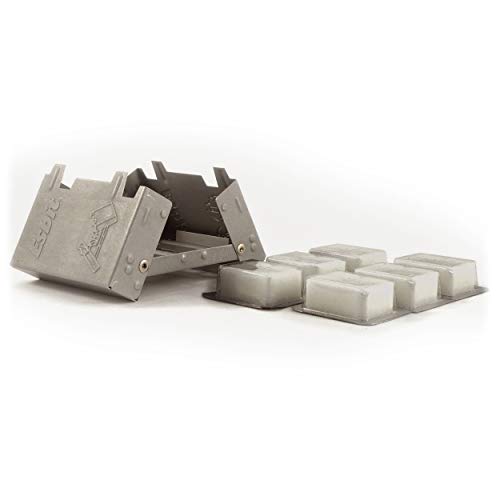 It’s a solid fuel camp stove. The metal part folds out and you sit a pot on top of it. The fuel blocks are burned one at a time but are stored inside of it when not in use.

Edit: similar to this

Camping stoves are less than $10, and the fuel will last for a couple days worth of dinners. Fried eggs and Grilled cheese can help keep you warm!

Plus you can justify the cost by actually using the food you've already got. Plan B would be to buy the fuel and make a stove out of a used can, but that's more dangerous for most people.

Well, that's only the top part. You still need the fuel.

I initially thought you were linking to something like the Esbit stove. I have one. Was able to warm up a can of ravioli and make some hot tea.

Well that can be a long list... here goes though:

I'm sure I'm leaving a few things off, but those are several of the basics

I use an alcohol stove. The one I have is made by these guys from those heavy aluminum beer bottles. It will not crush easily and comes with a windscreen. You could just make your own though.

There are other companies who make alcohol stoves and even sell them on Amazon.

Lots of people like Esbit stoves but the fuel is harder to come by.

For a canister stoves I think UL folks go with the MSR Pocket Rocket but I am not sure because I haven't used one in over 8 years.

Over the past year I've been piecing together camping gear. I ultimately plan on doing backpacking trips once I become a more experienced camper, and graduate college. Growing up, I went camping frequently but never really did any backpacking or primitive camping where you have to hike to the campsite - my dad always took us to the campsites you can drive up to. My friend, who boasts about the camping etiquette and survival skills he learned in boy scouts, justly criticizes my experience camping - which is limited to campsites that don't require you to pack light and have easy access to water (and restrooms). For example, I've never had the opportunity of digging a hole to shit in. Do I just dig a hole with my hands? Do I need to bring a shovel? How much toilet paper do I need to bring for a 2-3 day trip? I know I have to bring the used paper with me, so how do you recommend carrying trash in general?

Things like this I figure I'd learn overtime. And I do plan on pacing myself; I'm going to work my way up from 1-2 day trips to 2-3 day trips to 4-5 day trips, and ultimately something like the Appalachian Trail. My favorite place to go camping is Big Bend National Park, and there's a 2-3 day trip I'd like to do sometime this year.

I guess my main questions are:

I just recently went on my first backpacking trip. It was just an overnight trip, but I used this: http://www.amazon.com/Esbit-Ultralight-Folding-Pocket-Tablets/dp/B001C1UGVO

It was the cheapest (10 dollars including enough fuel for a day or two), smallest stove I could find, it was rated well and I got free shipping. After using it, I was very happy with it. I used it to boil water for coffee, and I cooked hotdogs and chili with it as well.

I was literally just using it on the ground (and I only brought a small lantern and some glow-sticks with me for light. I was able to cook on it in the dark nonetheless. Super easy and effective.

If I decide to go on longer trips, I might get something bigger, but then again I might not. It's pretty awesome.

The only downside is that the fuel has a bad odor, and you have to wash your hands (or wear gloves) when handling it. Simple problem to fix though. Just don't sit downwind of it and keep your food covered if possible.

Pretty sure this is a portable camp stove. You would maybe soak that pad in alcohol and set a pot on top. Something similar to this: https://www.amazon.com/Esbit-Ultralight-Folding-Pocket-Tablets/dp/B001C1UGVO/ref=sr_1_14?ie=UTF8&amp;qid=1539965937&amp;sr=8-14&amp;keywords=camp+stove+folding

Not throwing money at a deceptive half assed kickstarter $ !=

Edit: and look a huge kit on sale https://www.amazon.com/dp/B01GG5FXHW/ref=cm_sw_r_cp_awdb_zkYNybKKJMJZR

Wow. Yea I can see that.

Someone should write a book; a street survival nutrition guide. It's not easy to buy the kind of food that works best in those situations from regular grocery stores.

Edit: we've been fly fishing out in the middle of nowhere for so long I can cook a surprising amount of stuff on this little stove the size of a pack of cigarettes, called an Esbit stove. Once you have the little stove, moreover, which costs about $10, the solid fuel pellets are really cheap. I could write an Esbit stove healthy field cooking cookbook.

Then go with the MSR Whisperlite that /u/gcranston recommends. However, it doesn't use ISO-Butane as suggested. It uses white gas. It is very easy to get a hold of here in the US. I have had one for almost 20 years and it still works wonderfully.

You have to purchase the bottle separately, but they aren't that expensive. Just make sure that you use a windscreen. It improves the cooking time significantly. You can easily make one.

I've used the Esbit (http://amzn.com/B001C1UGVO) stoves before too and they work. They don't work super fast, but if you are cooking something for one, you can't really get any cheaper. If you are only cooking for yourself or just heating things up, these little stoves work well. Every time I have used one, I have had people tell me that it will never work, how silly I look with them and how cheap I am, but they are small and cheap. Again, you need a windscreen for these to work.

How long would one of those little 8ounce gas cans last for?

Also, whats the benefit to gas cans vs solid fuel like this

It packs small, costs nearly nothing and is capable to heat an occasional can of food as well

Anybody can understand that. It wasn't what I said. Read what I actually wrote. I am speaking specifically about THIS POST. OP in THIS POST spent at least $10 on these supplies. Yes, many people have these things and can make one for cheap or free even. No one is arguing that. What I was saying is that even if you can build one of these for $1-2 and another $1-2 on fuel, they are still half way to the cost of a real lightweight stove that will work in all conditions and last a long time and actually work repeatedly and as expected.

For a fun/novel thing to do, there is nothing wrong with it. If you would rather have this than even an esbit tablet (which would still cost less than this stove + fuel and be lighter and not make a mess and work in almost all conditions), then that is your choice. I wouldn't and I have made many makeshift stoves and gear of all sorts. Sometimes it makes sense and sometimes it doesn't. This is onetime that it is a false economy.

Edit: For anyone that wants to see what I am talking about, at even a bit of a high price on Amazon you can get six Esbit tabs and the stove for $10, which is about $1 per use and not far off what an alcohol stove will cost to run. One tab also will actually boil water in most circumstances in 8 minutes or less: https://www.amazon.com/Esbit-Ultralight-Folding-Pocket-Tablets/dp/B001C1UGVO/

Esbit is a similar fuel type (solid). It would work better for camp cooking than sterno.

Here is from the budget backpacker:

Utensil: I use a standard aluminum fork and spoon because they weigh less than an ounce each, but you can also look at this:

Once again, not 100% ultralight, but pretty light weight and a good starting place for a beginner.

I have this mini, portable stove on my WL.

You can also get an Esbit version. They're nice because they can hold a fair bit of fuel in a pretty small package. It comes with a screw top and an O-ring, so you can fill it with fuel, put it out, and seal it back up with no wasted fuel. They're also lightweight, and you can use over the counter rubbing alcohol for fuel - although the BTUs on that sort of stuff might be inferior to other fuels. I don't know.

The only thing I WILL say about them, though, is that I'd recommend keeping it relatively warm in colder weather. I've found that my alcohol stove simply refuses to start if its too cold, and so the last time I went out I kept it in my sleeping bag with me while I slept, and it fired up without much trouble in the morning.

Also would recommend some sort of windscreen, just in case. Esbit does also make another UL stove that uses their fuel tablets, which the alcohol stove can fit into (but getting it lit requires a little extra effort either getting it into the slots, or lighting it while its in the slots).

Of course, there's also always these guys also by Esbit, which you can store the fuel cells in when its folded. The only thing I don't like about them (which take with a giant grain of salt, because I'm 100% an amateur to all of this) is that you're limited with the fuel cell and the length of burn. You don't end up wasting any excess fuel with the alcohol stove. Also, you do get the added benefit, if you're using rubbing alcohol for fuel, of having an antiseptic available in a pinch.

Finally, an option to keep the whole package on the small end, you have these little guys as pot stands. They work great to keep my pot elevated off the stove, but I will say that they do seem to get in the way of the burn a bit and inhibit some of the airflow, but not enough to be a huge issue. They fit into the Esbit alcohol stove perfectly, but again, you might be better off with something that lifts the pot up a bit more for a better burn. I think they're designed to be used with the their own brand of alcohol stove, though, so that's probably why they don't work great.