Reddit reviews It's Even Worse Than It Looks: How the American Constitutional System Collided with the New Politics of Extremism

We found 12 Reddit comments about It's Even Worse Than It Looks: How the American Constitutional System Collided with the New Politics of Extremism. Here are the top ones, ranked by their Reddit score. 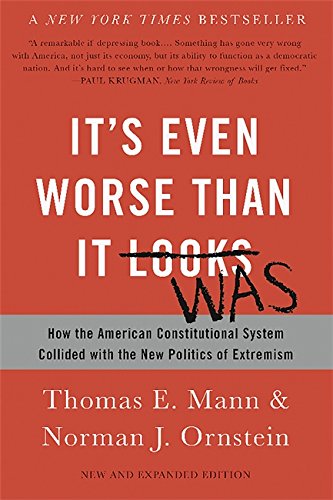 12 Reddit comments about It's Even Worse Than It Looks: How the American Constitutional System Collided with the New Politics of Extremism:

Here's an old article written by the authors of this book, which I also strongly recommend.

This sub is dedicated to centrism and evidence, so here is what the evidence says about making the US more centrist. Maybe the evidence has shifted since 2012, maybe not. But it's a good source to counter a lot of the ideas you may frequently hear: that a third party, or term limits are the only way to save politics. These guys ultimately offer an optimistic view that relatively doable changes can set the country on a better course. No need for Revolution.

A committed party that, you know, likes Democracy and upholds the values of Liberalism (that's large L not small l). This book does a good job of outlining the issues with the R party: https://www.amazon.com/Even-Worse-Than-Looks-Constitutional/dp/0465096204.

One can also do a thought experiment if instead of Trump this was a D President doing the actions. What would the R party be doing?

Please also know that what you see on Twitter or hear about happening on a college campus isn't also the D party's platform. There are lots of shades of grey when it comes to Free Speech and such a right is not absolute.

However, I do agree with Haidt that Speech does not also equal physical violence which is what the folks on College Campus seem to be equating: https://www.amazon.com/Coddling-American-Mind-Intentions-Generation/dp/0735224897.

With Due Process you need to be specific. Different actions have different Due Process steps. Some of which are in need of reform.

I agree with the other commentators about the problems with Fahrenheit 9/11. It has a deceptive style of presentation and has next to zero chance of resonating with any conservative.

Documentaries may not be the best route here. I don't know any documentaries about problems with the modern Republican party, and given your characterization of your parents' views you'd want something that directly argues the problem is asymmetrical. Perhaps if you gave us an idea of political issues you'd like to focus on that'd be more promising. There's a lot of documentaries about the Iraq war, the drug war, racism, corporate malfeasance, etc.

The best thing I can think of about Republicans in particular is the book It's Even Worse Than it Looks by political scientists Mann and Ornstein, who are moderate to conservative-leaning. It's largely about increasing political dysfunction in Washington and while not excusing Democrats, it specifically argues Republicans bear the brunt of the blame. Their criticism is nearly devoid of ideological content, they're pointing out the degradation of process and procedural norms that led to things like the debt ceiling showdown.

Unfortunately it's not in documentary form. The closest is these C-SPAN style discussions, or just about any youtube results that show up for Norm Ornstein.

I read it in a book called It's Even Worse Than it Was. It was in the last chapter, if I recall correctly, where the authors discussed solutions to the problems they spent the rest of the book describing. When turn-out is low, it tends to mostly be the party loyalists who show up, and those who are more passionate and motivated, which makes for more partisan elected officials being represented. When more people show up because it's their civic duty, or they made a promise, or because it's compulsory, the candidates who are elected tend to better represent the constituency they serve.

I think it's an important distinction to make because young people are especially susceptible to feeling like they don't enough about the issues or candidates to vote, and if those people stay home it would lead to a less representative democracy.

They've written an entire (quite good) book on it.

False. That's the FoxNews narrative, "proven" by selective or alternative facts. Read It's Even Worse Than It Looks: How the American Constitutional System Collided with the New Politics of Extremism.

I dont know what you mean by fringes but I do know that the R party is the party causing the majority of the problems. They are the ones who held open a seat for a year because they wanted the power.

Instead of preserving an institution (like you would think a conservative would) like the USSC so it can be seen as legitimate they undermined the courts.

History will not look kindly on the R party.

To be fair, he didn't say the Republicans did any of those things you state above. I don't know if he has said those things before, if so, he'd be wrong. What he said about Clinton, in relation to the debt, I found to be misleading but it made sense the second time I watched it. Going from talking about debt to deficit without explanation is inherently misleading because so many citizens conflate the two.

Bill Maher is an entertainer first, and as such I take his belief in something with a grain of salt; the two men he mentioned, Ornstein and Mann, now I do respect their opinions. I don't think what they say in their book should be disregarded because Maher mentions them. (Not saying you did that u/JanePoe87)

No, this Republican behavior, this erosion of comity and functional norms, has been well documented. Both sides are not the same.

&gt;In this revised edition, the authors bring their seminal book up-to-date in a political environment that is more divided than ever. The underlying dynamics of the situation—extremist Republicans holding government hostage to their own ideological, anti-government beliefs—have only gotten worse, further bolstering their argument that Republicans are not merely ideologically different from Democrats, but engaged in a unique form of politics that undermines the system itself. Without a fundamental change in the character and course of the Republican Party, we may have a long way to go before we hit rock bottom.

I think it's mostly always been this way. If you read the book It's Even Worse Than It Looks: How the American Constitutional System Collided with the New Politics of Extremism, by Mann and Ornstein, it's all spelled out perfectly. In terms of the modern polarization? I'd argue it started with Newt Gingrich and his deplorable tactics used to gain a republican majority in the House of Represetantives for the first time in a long while in 1994.

It's also attributable to several other factors including:

&gt;Conservative politics has been for thirty years about tearing down order

I don't mean to turn this into a political debate, which would get increasingly off-topic for this thread and subreddit. But I'd just suggest that one of the issues in dispute is whether the Republican party is genuinely conservative in the sense above.

Something like this book, for example, makes the case that the Republican party might be more accurately described as radical than conservative—which is even more remarkable given that one of its coauthors still works at the American Enterprise Institute.

&gt; I put myself back together in a manner I decided I wanted to be.

&gt; You're the overwhelmingly negative and hostile one in this discourse

"This discourse" is a transparent (ineffective) trolling attempt, which you know, and you have no audience here, so let's not bullshit each other.

&gt; I reply here because it gives me amusement watching you lose your head ever post

There is no reality where that has ever or will ever happen. Sorry bub.

&gt; I knew as a fact, that you would continue to reply to me. So I kept it going

&gt; If you're harassing me

Now this is where trolling meets projection - the rightwing's favorite and most laziest tool.

&gt; You are willing to hurt people around you based on the fact that their view of the world differs from yours.

Now we'll add some complete fantasy to demonize the opponent.

&gt; your rampant hate towards others with differing views.

Here's an interesting and modern take - the rightwing believes that all ideas are automatically worthy and viable simply by the virtue of their existence, and if you dare to point out the shittiness of those ideas, then you're an "anti-free-speech fascist". This is how they force a democratic society to hear their nonsense, despite the fact that the vast majority of sane, informed, compassionate people easily reject these regressive views (and no, we don't need "more regression" - read a book, read the real news, understand the world as it was and as it is. Regression is failure by definition).

&gt; you are moving further and further into the extremes while lying to yourself and pretending you haven't changed at all.

And the final, feeble, laughable lunge. The western Right is extremist by all unbiased historical and political metrics, not only in the US but around the world. And Trumpism, your chosen ideology, is an exploitative pestilence of our worst impulses, fears, and cultural pockets of ignorance.

Your entire endeavor here is embarrassing, your brain is rotten, you're full of deflective nonsense, you aren't "a positive person", and no one is buying any of this. Game over, and please don't bother trying again.