We found 12 Reddit comments about Moto G - Verizon Prepaid Phone (Verizon). Here are the top ones, ranked by their Reddit score. 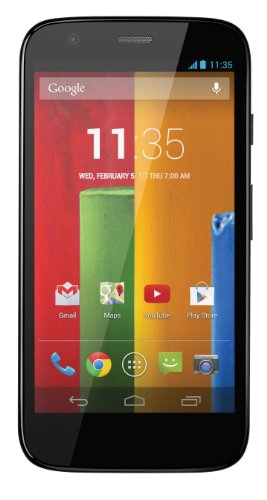 If you can stretch your budget by $20, theres the Moto G, which is arguably one of the best phones under $200

If that is out of your budget, some carriers offer the phone for $100, but you would have to use their prepaid plans

if 8GB isn't enough, 16 is another $20. For a phone of your pricing, unless you can find a spectacular phone deal (I found an iPhone 4 for $100 on Craigslist) There aren't many options for a "good" phone (i.e s3, apple quality)

HTC also has the Desire 200 (White is more expensive, so i linked the black one)

Both these phones have exceptional build quality for their pricing compared to others in this range, but if I had to pick one, I would choose the Moto G. There might be other phones around the same price and quality, but I find these two to be the "leaders of the pack"

Hope this helps you find a new phone!


Edit: The Moto G unlocked and the Desire 200 are both GSM and can fit your needs (T-Mobile)

Like someone else said in this thread, the absolute cheapest phones will give you a hard time and will earn you less money. If you have $100, invest wisely and purchase a phone with good solid performance:

Moto G http://www.amazon.com/dp/B00HPP3QD6/ref=cm_sw_r_udp_awd_Q5K3tb0HYAE59 with Verizon prepaid $45/no + tax. Unlimited minutes, text, 1GB data with auto pay. I suggest Verizon, because they have the best network for coverage. If you know T-Mobile works, there are a lot of options.

You could also look into paying more for a Moto X used that would be a bit more than your $200 budget.

I'd say that some of the best Android phones out right now are (in no particular order), the Nexus 5, Moto X, LG G3, HTC One M8, and the Samsung Galaxy S5.

If you'd like to try out modern stock Android without spending a lot of money or committing to any kind of contract, you could buy a $75 8 GB Moto G for Verizon prepaid and use it unactivated as a WiFi-only device (as if it were an iPod touch). In other words, you'd pay $75 once and nothing else (except maybe apps). The Moto G is the best low-end Android phone and a great value for the money. It would be a good way to test drive modern stock Android while you're still using the Nokia 920 as your main phone. The biggest downsides would be the camera and the storage.

The phones that are best for getting Android updates and getting them promptly are Nexus phones, Google Play editions, and Motorola phones. Something called Android Silver is rumored, and it may replace the Google Play edition lineup but we don't really know the details yet. As for other Android phones, unless you buy a popular flagship, you'll get OS updates quite late or might not get them at all. That's where custom ROMs come in.

For really customizing Android, check out XDA, but before posting any questions there, you need to read rules and stickies (FAQs, guides, etc), follow how-to instructions carefully, and use search (forum search and in-thread search). Their XDA for newbies video is rude (not welcoming at all), but there is very useful stuff on that site when it comes to tinkering. /r/Android /r/AndroidQuestions

There is definitely better available.

Herp derp, I missed the part where you said STWireless. Whoops. Well, in that case, we're looking at GSM phones. Swappa has some used phones at a reasonable price, like the Nexus 4 at $170, which runs stock android, so it performs WAY better than your rezound. There's also the Moto G at $150. If you look at ebay, there are some Moto X's available at around $170 as well.

Honestly, check out the Moto E or Moto G for this (depending on where you live). Newest OS, Really good specs for the cost, and the Moto G is as low as $70 on Amazon.

A cheap tablet is a good idea too. But I find cheap tablets are often slow and not really worth it in the long run. And this would be a nice small controller, like a nice little remote to put next to all the others that may be littering his coffee table.

You can get a prepaid Moto G for Verizon on Amazon for only $70 new. See link below. The Moto G is a cost-down version of the Moto X, but still a solid phone. More importantly, it runs near vanilla Android. Not sure if the prepaid thing will work for you though.

I personally used my old Motorola Atrix HD, Flashed the latest Cyanogenmod on it, and placed it on Airplane mode to use it as my Chromecast remote. It works relatively well, is pretty smooth, the battery last me literally 3+ days, and I use it with Launcher 8 for a nice, quick, and minimalistic UI for my main "Media/Remote" apps and a quick swipe to the left for widgets, and a swipe to the right for the other apps. This is what it looks like.

But I'd personally opt against getting a shitty old Nexus 7 tablet and such for it will not only be oudated, but clunky.

If you want to have smooth sailing, and a great Remote, that's 720p, has great battery life and is buttery smooth without the need to flash it, get a Prepaid Moto G and then bypass the activation screen by doing the following:

This way you'll be paying $99 for a new Phone/Remote that will perform beautifully, and If you want to go the extra mile, you can flash a Nexus-Like ROM.

That's how much they cost - http://www.amazon.com/Moto-Verizon-Prepaid-Phone-Only/dp/B00HPP3QD6/

Sorry for the mistake, it was 90, not 80. Still, an incredible price for a smartphone/internet connected device that performs as good as the Moto G

Edit: The flip cover puts it at about your asking price brand new like you said, but I still don't see why anyone wouldn't just buy it at your price from a retailer they know.

hey! someone else also recommended the moto go... was just wondering the verizon prepaid one is sufficient for wifi? http://www.amazon.com/Moto-Verizon-Prepaid-Phone-Only/dp/B00HPP3QD6/ref=sr_1_6?ie=UTF8&amp;amp;qid=1404764529&amp;amp;sr=8-6&amp;amp;keywords=moto+g