Reddit reviews Neuroscience of Personality: Brain Savvy Insights for All Types of People

We found 13 Reddit comments about Neuroscience of Personality: Brain Savvy Insights for All Types of People. Here are the top ones, ranked by their Reddit score. 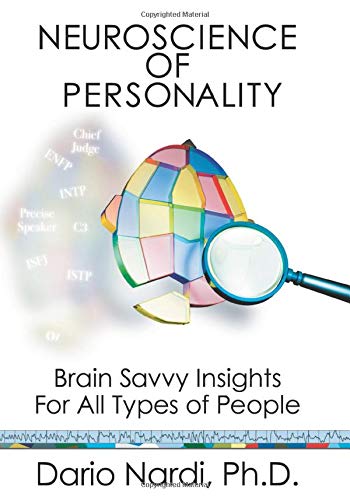 13 Reddit comments about Neuroscience of Personality: Brain Savvy Insights for All Types of People:

I recently read "Neuroscience of Personality" and the author accused INTPs of being the worst listeners because our brains go off into other directions, creating a 'Christmas tree' pattern as our intuition runs amok. Meanwhile INFPs tend to be the best listeners.

In addition to the books raijba recommended, "Neuroscience of Personality" by Dr Nardi is a great read. Here's a talk he did at Google.

Agreed. Having a reliable test would be nice (and a requirement for further study to be sure), but the real meat of the issue that many seem to be concerned about is the validity of the personality classification theory itself.

I believe what the parent is referring to with the EEG correlations to cognitive functions is Dario Nardi's research on the Neuroscience Of Personality. He has a talk about it here with some interesting evidence, but I have not yet had a chance to read over the book. He also did an interesting AMA over on /r/mbti a while back that's probably worth a read as well.

As I remember, it focuses on type &amp; functions as linked with fMRI data from his research.

Fascinating stuff that it sounds like you will absolutely love.

No single source, but these are the ones that I found the most useful in my endeavors

Yes. Dario Nardi, a professor at UCLA did/has been doing personality research with EEGs. He has a book where he published his methodology, sample size, and findings, but there are also readily available YouTube videos, PDFs, and even a Reddit AMA where his findings are presented. I should mention that he uses Jung's model of functions, but the four-lettered MBTI types.

I did Google the Pittenger study since it wasn't on your list, but it seems like he didn't take functions into consideration as he says, "MBTI theory states that each of the four preference dimensions stands alone," which is contrary to Jung's idea that each MBTI preference is either introverted or extroverted in nature in the function stack. It also doesn't seem like any imaging technology was used, so at the very least I don't think it contradicts Nardi's findings.

I'm not trying to pick a fight and obviously you've done more research into the psychological aspects of personality, but I don't think we can fully discount MBTI/Jung's functions as adequately predicting how people will react or what they might be good at. I think there is variance based on individuals, context, culture, and circumstances, but there are certainly correlations. Furthermore, I don't think it can be used to predict what career you'll excel in or what your hobbies are or if you like your coffee black or not (as some people try to use it for).

Also, I'm not expecting you do research Nardi's findings in any depth but if you do and you happen to find holes, please do let me know. I'm always open to being wrong.

Meyers Briggs just describes (or lumps people into categories with common discriptions) how you primarily perceive information and process that information. There has been limited research into how Meyers Briggs types manifest neurologically. Correlation is not causation, but as soon as you start having basic physical phenotypes (straight, brown hair) it makes sense to look for a born-that-way reason. The equivalent of curling or dying your hair would be developing your lower functions (Fi, Se), but you'd still be dominantly Ni, Te.

&gt; The cognitive function test results are all over the place, and never in my life have I seen a result which would even somewhat resemble any theoretical results. The results of the 3rd and 4th fuctions and the PoLR function can be basically anything, and you can have rather high results in a function that is not in your ”function stack”.

If you acknowledge that everyone uses 8 functions then you need to take all of them into account when analyzing somebody's cognitive functions test.

&gt;The correlations between MBTI dichotomies and Big 5 are in turn high.

In the mean time, feel free to continue exploring your trait continuums or dichotomies, but you didn't make it clear to me why that would make the theory falsifiable if we're still relying on subjective reporting.

I had to pull out my copy to look this up. I recalled “Types” was first published in 1921, but Jung published different editions and refined his theory in later editions, the last of which is 1949. In the first Swiss edition’s foreword, 1921, Jung remarks that the work and theory are grounded in his psychiatry work over the last twenty years. The printing I have is from 1976 and purchased at a remarkable price of $.25.

Jung references Friedrich Schiller as the earliest known (to Jung) person to start systematically typing people according to their external behaviors.

Dario Nardi did some interesting work on trying to map-link Jungian cognitive functions (and sadly, MBTI) to brain areas using Electroencephalography. You can find him on YouTube or here’s a book he wrote about it: https://www.amazon.com/Neuroscience-Personality-Brain-Insights-People/dp/0979868475

I tagged multiple people because they might be interested and I wasn’t exactly sure how to reply to all that posted underneath this comment and its children.

I'd recommend you acquire and read this book first and then get back to us.

I'm glad you've discovered DaveSuperPowers and see the power of his system. You should also check out Dario Nardi's book which I think its the next step in the puzzle to make mbti more testable.

Have a read, decide for yourself.