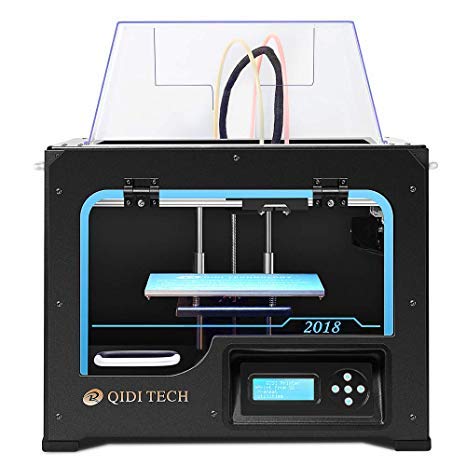 I have been printing for about 9 months now and wanted to know if anyone has any recommendations for a budget dual extrusion printer.

I currently have a MP Maker Select 2.1 and I am looking to upgrade to a dual extrusion printer. Been looking around and found 2 that are pretty much the same,
&amp;nbsp;

Flashforge makes printers based on the design that was open sourced by makerbot with the replicator 2.

link this printer should be comparable and within your budget.

There is a brand called QIDI TECH that sells printers that are basically clones of Flashforge's range.

Here is a redditors review of a QIDI TECH 1 after having the printer for 12 months. From what I have seen around the subreddit they are good machines, so if you are wanting to save a bit possibly go that route. Flashforge is a reputable brand though, either would be a good choice. The Creator Pro equivalent would be the QIDI TECH 1 or the X PRO.

I have been through 7 different 3d Printers. 2 at work and this is my 5th at home.


This is a nice starter printer: http://www.monoprice.com/product?p_id=15365


And this is my current printer: https://www.amazon.com/TECHNOLOGY-3DP-QDA16-01-Extruder-Structure-Filaments/dp/B01D8M32LU


No matter what you spend, plan on maintenance, modification and repairs. I have had all of my machines apart enough that I can probably put them back together blind folded.

Crazy I had no idea seems like I've been helping someone out with no idea.... Thanks I'll update it.

Edit: all fixed, now that I think about it I linked from my wish list, maybe that was it.

[I was looking at this one due to budget and it seems to be reviewed highly]
(https://www.amazon.com/dp/B01D8M32LU)

Look into the Qidi Tech. It's practically the same printer, is positively reviewed and is $200 cheaper. It also has a $50 off coupon today so you can get the whole thing for $650.

Just a heads up, there is a printer made by a company called Qidi Tech that is literally the exact same printer as the one linked, except a few hundred dollars cheaper.

https://www.amazon.ca/QIDI-TECHNOLOGY-3DP-QDA16-01-Structure-Filaments/dp/B01D8M32LU/ref=sr_1_3?crid=26T35QREUTSS6&amp;keywords=qidi+technology+3d+printer&amp;qid=1564285583&amp;s=hi&amp;sprefix=QIDI+TECHNOLOGY+%2Ctools%2C183&amp;sr=8-3 I bought this one with part of my tax return, it works pretty well, but it does take some experimenting with the default settings to get higher quality prints. If you do get a 3d printer just remember, a slower print means more detail and less chance of failure.

This is a pretty good flashforge creator pro clone. My only gripe with this printer is that leveling can be a pain in the ass sometimes.

i3s can also be modded to have multiple extruders, or use multiple filaments in one hot end (although the former adds a good amount of time to the final print if the materials have different melting points).

Its an excellent printer. I did a lot of research before buying. Comes with 2 reels of filament, and video manuals.

Well, starting to look at this one as well since it's enclosed:

But the X-ONE could have an enclosure added with some work. Definitely have gotten a good impression of Qidi

Edit: this printer to he exact

Yeah, the closest one to us is in Atlanta, GA I believe. With that said, I would suggest the Qidi Tech 1 that is available on Amazon. It is another rebrand of the FF Creator Pro and priced substantially lower (although not as low as the PowerSpec).

However if you can save up the Prusa Mk2s with the multi material upgrade does 4. Its about $1000.

Some context. Hoping someone has some ideas or experience. Thanks for reading!

QIDI Tech I on Amazon (less common printer, I’d link to prusa if I were advertising 😉)

I am not printing anywhere on this graph. This is just a manual test of setting various temperatures to see what was going on, without extruding any material.

I first noticed the problem during a print. Some filament was scorched, but the nozzle kept jamming (I soon discovered that it was likely because then it was too cold).

Was printing with ABS, only on the right extruder (T0). I thought maybe just T0 was broken, but this test made the situation look a little more interesting. I am guessing that the ghost signal on T1 has to due with an electrical problem. But it could be any part of the feedback loop (heaters, sensors, or controllers--maybe even a fan?).

UPDATE: Note that the third number is heated bed temperature, which does not ripple. To me, that might exclude something like the power supply?

It's a hard choice, but I can say that when I was looking at potential units, I did consider the QIDI TECHNOLOGY 3DP-QDA16-01. This is still priced around entry level, so I wouldn't expect it to be a ton better; however, it does have some advantages. One nice thing is that it has a dual extruder setup. Initially, you might think "Why is printing in two colors a big deal?", but the advantage isn't colors but rather material. There's a specific type of filament that is water soluble, which works well for supports. This allows you to remove supports far easier than snipping them and filing down the nubs. It's not always a hard thing, but doing this for delicate parts can be a bit unnerving!

One thing to also consider when it comes to the world of 3D printing is how is the third-party support. That's where rebadges actually work out pretty well as these common designs usually mean more third-party components or even 3D printed parts available. For example, the Monoprice Maker Select V2 that I use is really just a Wanhao Duplicator i3. If I find parts for the Duplicator i3, they're likely going to work with the Select V2 as well. That QIDI unit earlier is the same as the FlashForge 3D Printer Creator Pro, and both of them are actually just rebadges of the Wanhao Duplicator 4! (Wanhao makes quite a lot of 3D printing products.)

One negative thing about that unit is that it's cantilevered. It isn't necessarily a problem, but it does mean that the weight of the carriage plate and hot plate are being carried only on a single side. Being cantilevered is normally only an issue when you start going up in build size, but it's worth noting.

I'd say the most important thing is to make sure the unit does everything that you need. It's not the worst thing if you go with a smaller, cheaper unit just to get your feet wet, and maybe work up to a larger, more capable unit.

Amazon does sell it themselves.

how about a replicator clone then.

This is a great starter:

At that price range, I've been extremely happy with my QIDI Tech printer. (http://www.amazon.com/TECHNOLOGY-3DP-QDA16-01-Extruder-Structure-Filaments/dp/B01D8M32LU/ref=sr_1_1?ie=UTF8&amp;amp;qid=1463690261&amp;amp;sr=8-1&amp;amp;keywords=qidi+tech) My friends who have 3d printers are all very impressed by the quality that it prints straight out of the box.

I'll also recommend, the biggest quality upgrade I've experienced is when I paid $140 to get Simplify3D. All objects instantly came out with better quality than when I used the free Makerbot slicer.