Reddit reviews The Birth of Plenty: How the Prosperity of the Modern World was Created

We found 3 Reddit comments about The Birth of Plenty: How the Prosperity of the Modern World was Created. Here are the top ones, ranked by their Reddit score. 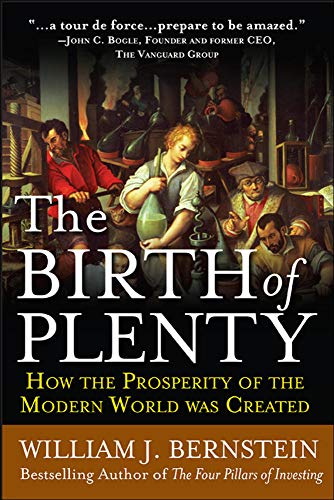 3 Reddit comments about The Birth of Plenty: How the Prosperity of the Modern World was Created:

Short answer: All economic growth derives from increases in efficiency. The govt could help with that by reforming patent system (remove the trolls), remove useless regulation (e.g. ADA compliance that is really an extortion racket), and ensure a level playing field (big banks vs small credit unions).

this is probably the most important book I've ever read.

You know, I would have said that myself until I read a booked called "The Birth of Plenty" by William Bernstein. If you've ever heard of "Guns, Germs, and Steel" by Jared Diamond, the former does a better job of answering the same questions.

The central thesis is that "property rights" and "capitalism" are two of the four factors needed for a society to fully prosper. Communism takes away property rights (and many other liberties - including personal freedoms).

So, if you believe the central thesis of "The Birth of Plenty", a memorial to victims of communism may not be far-fetched, but it's no more important than, say, "a memorial to those who perished in the pursuit of scientific rationalism," one of the other four factors from the book. Funny how the Conservatives never pushed that. Oh right...because they trampled all over scientific rationalism and pursued "decision based evidence making."

I'm feeling wordy today. (regardless: have an upvote ;)