Reddit reviews The End of History and the Last Man

We found 12 Reddit comments about The End of History and the Last Man. Here are the top ones, ranked by their Reddit score. 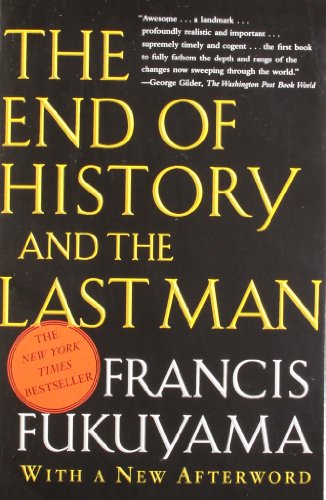 12 Reddit comments about The End of History and the Last Man:

What you're thinking of is probably Fukuyamas second thesis of the 'last man'; http://www.amazon.com/The-End-History-Last-Man/dp/0743284550

&gt; we'd won, it was all over and capitalism and democracy would give us a bright modern future

Francis Fucking Fukuyama deserves a huge share of the blame for propagating this bullshit.

Geez, where to start?

First of all, since WWII there has only been one election decided by 10% or more, and that was Reagan. Every other election has been nearly 50/50 between the two parties. No matter the changes in demographics, which states voted what, which issues matter, etc. Always basically a coin toss as to who wins.

So to say "We are imploding as a country" is just hyperbolic idiocy. We are, as we have been for 70 years, divided in half. Seriously, just stop. If the election results on one hand or the "protests" on the other cause you to think anything real has changed, grab some smelling salts, grab your fainting couch, grab a Xanax, get a therapist, whatever, but seriously stop being such a drama queen. Half the county is Republican, as it has been for nearly a century, and the Democratic left is a bunch of cry babies, as they have been since 1969 at the latest. Just stop.

Second, this whole massive angst is, again, such a great example of why democracy is not a great idea. It takes EVERYTHING related to government - law, economics, foreign policy, war, whatever - and transforms it into an ideological statement about life, the universe, amd everything. It makes it such a bigger deal than it ever would otherwise be. As everyone, from democracy's supporters to its critics acknowledge. It's not that important. Just let it go.

I don't think they've won anything. They made fools out of us because they were fools. Read some of their "philosophy." I recommend Francis Fukuyama's The End of History and the Last Man. It's nonsensical gibberish claiming that liberal democracies are inherently perfect.

By these people's thinking, we could create Iraqi and Afghan parliaments, and the problems and animosities in those countries would vanish. It's ahistorical garbage. It was this that led us into war with too few troops in Afghanistan, the graveyard of empires, and Iraq, a country held together by strongmen, in a region held together by strongmen, since the British left.

As Macron said, "I am a strong believer that modern political life must rediscover a sense for symbolism. We need to develop a kind of political heroism. I don't mean that I want to play the hero. But we need to be amenable once again to creating grand narratives."

I think American Neoliberals and Neoconservatives are too quick to try and hail the "Last Man" has arrived, when the process is going to continue long after we've all expired. Public goods and interests unite a society to provide for the common welfare, consumerism is just stuff for individuals and the money it provides makes us more comfortable, but it doesn't unite us.

This isn’t about “non intervention.” The arguments are solid arguments for why liberal internationalism has failed. This is far broader than a handful of failed interventions.

And I mean honestly, read some of the low-ranking reviews. "This is an academic's view of what 'liberalism' is and ignores what the founding father's said!". These are absurdly contradictory opinions that seem to have missed the entire point. Here's another example the value of book ratings on political ideas: Francis Fukuyama's The End of History. Reality has clearly defied this bit of anarchistic nonsense (yet I suspect many of you want to disbelief that), and here it is with soaring accolades.

Someone already beat you to it:

He wasn't right either.

&gt;There are no such attempts. Only naïve people and idiots can believe in such, or see such in Iraq War, lol. US and the West repeatedly tried and partially achieved transforming places into both countries where the Islamists, reactionaries and all kinds of distasteful bunch rule though, as well as distorting countries and of course through backing weird factions or using divisions, carving out both huge internal conflicts and extremists bunch out of those. Just like the Iraqi issue you have referred to, or the terrorists you've referred to. Of course same goes for Syria, but also the very core ideology of those terrorists have been spreading from, backed and financed from and originated from, you know, very one being supplied, backed and supported by the West.

You give them too much credit to believe that Iraq, or Syria was some sort of Machiavellian master plan.

No, the neo-cons really do believe their own garbage.

Actually mass shooters in the USA tend to be either a) black thugs or b) nihilistic white/asian teenagers from liberal homes. I wouldn't say there's a "conservative" or "NRA" shooting problem, just a general lack of pragmatism on the issue of guns.

This is getting to be a pretty boring conversation. I'm not gonna admit that we need to ban "conservatism". Deluded as you are, even you must realize that the next mass murder or sexual assault in Europe ain't gonna be commuted by a "conservative".

If you've got nothing more to add then let's call it a day here.

&gt;Make note, I'm just a high schooler. I don't have any significant experience in academic IR studies, and I get most of my information from books, magazines, and journals. To be honest, I'm a little fuzzy on theory


I was the same in high school, trying to self-teach. If you have the opportunity to take a college intro-IR course it clears up sooo much. If you did it like me, you are teaching yourself out of order and context, and in a way that biases strongly towards some things and not others. Anyway, if you can't take an organized class, try to pick up a book on theory and that starts at the basics. I haven't read it yet, but if you like Realism then The Tragedy of Great Power Politics is supposedly excellent. Likewise, The End of History is the go-to Liberal book. Haven't read that either yet, so someone correct me if I'm way off-base with these recommendations. There's also Constructivism as the new thing, but I'm not really familiar with it. Anyways, getting theories down more helps a ton, it definitely changed my views on whether or not certain wars were good/bad ideas. But from your post you seem to have a good grasp on things, so IDK if this advice will help that much.


(^ this isn't related to your question, I just thought it might be helpful)


Anyways your question is basically Liberal Vs Realist it seems. A liberal of the Neoconservative (Bush, Rumsfeld, Cheney, ect.) branch would say Saddam violated the liberal order first, and now the newly democratic Iraq has removed the threat. Iraq will join the other democracies and only attack dictators til there are none left and we have world peace. (this is really dumbed down, but you get the point)

Other less militaristic liberals (the Clintons, Woodrow Wilson especially) would say that that was an expected occasional break-down in the liberal order, and that liberal institutions for the most part prevent this sort of thing from happening more often, as it would if there was no UN or WTO ect. In their eyes, if Bush were ever put to international court and tried then it would be proof of the liberal order's success. The liberal order includes international free trade, which liberals say makes war unprofitable, and so they say, unlikely.


Realists (George HW Bush, Nixon, Kissinger) would agree with your middle paragraph, that the 'global order' is a manifestation of American hegemony, and that liberal institutions are set up to maximally benefit the USA, which is why other powers become revisionists; Iran/China/Russia does not feel it benefits from a US-led order (the WTO, World Bank, ect), and wants to set up an new order that maximizes their own power instead.


So its depends on who you ask, there is no real consensus here. For what its worth, I think you are dead on about the 'liberal order' really being the 'American order', and like you said, its mostly been a good thing.

&gt; You give them too much credit to believe that Iraq, or Syria was some sort of Machiavellian master plan.

It wasn't, yet putting backing such lowlifes was planned, as well as backing KSA or supporting scum or using divisions was pretty much intentional.

&gt; No, the neo-cons really do believe their own garbage.

Yes, I'm sure they also believed in mass destruction weapons. I'm sure many naïve bunch also believes in that they were spreading democracy, but I'm not sure how that's relevant. Both the real intention wasn't that, nor it cancels the responsibility. Let's not pretend that all have been done since the WWI or WWII was with some good intent.

&gt; Actually mass shooters in the USA tend to be either a) black thugs or b) nihilistic white/asian teenagers from liberal homes. I wouldn't say there's a "conservative" or "NRA" shooting problem, just a general lack of pragmatism on the issue of guns.

There is a structural problem which many conservatives are the main cause with their stupid agenda. So, I can see American conservatism there.

&gt; This is getting to be a pretty boring conversation. I'm not gonna admit that we need to ban "conservatism".

&gt; Deluded as you are, even you must realize that the next mass murder or sexual assault in Europe ain't gonna be commuted by a "conservative".

Highly probably will, for the next murder. Rather by a Christian one or a Muslim one. Sexual assaults, not sure but sure that both conservative Muslims and conservative Christians are more prone to such acts. Of course, we can give a go to conservative Catholic clergy as well, who knows?

&gt; If you've got nothing more to add then let's call it a day here.

Sure, yet I'm still insisting the total ban on conservatives, given your logic. To be honest, it really would solve many issues but hey.