Reddit reviews The Language Instinct: How the Mind Creates Language

We found 10 Reddit comments about The Language Instinct: How the Mind Creates Language. Here are the top ones, ranked by their Reddit score. 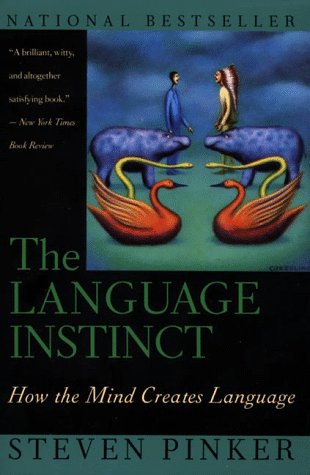 10 Reddit comments about The Language Instinct: How the Mind Creates Language:

You don't hear your thoughts, you translate them into language and then "hear" the translation. People don't think in a real language but in something called "mentalese". The hypothesis of linguistic determinism, stating that peoples thoughts are determined by the categories of their language is known as Saphir-Worf hypothesis, but it's shown to be wrong.
There are numerous examples which show that there is no one-to-one language-thought correspondence. Have you ever had the experience of uttering or writing a sentence only to realise that it wasn't exactly what you meant to say? To have that feeling, there has to be a "what we mean to say" that is different from what we said. Sometimes there are no words to describe your thoughts. Also, when we read or hear, we usually remember the gist, not the exact words, so there has to be such a thing as a "gist" that is not the same as a bunch of words. (there is meaning independent of the phrasing) And if thoughts are literally words, how could a new word ever be coined? How could a child learn a word to begin with? How could translation form one language to another be possible?
There are some examples of brain-damage patients wouthout linguistic capacities which are capable for abstract thought. (they can think but have great trouble to get the words out, even to themselfs, they just can't put sentences together in any way) Also, there are examples of deaf people who never learned sign language, but when instructed, they mastered it very very quickly and showed they understood all kinds of abstract concepts without naming them. If they didn't know any language they tried to communicate the concepts through pantomime.

Weaker version of the Saphir-Worf hypothesis would be linguistic relativity. This may be true, but only in a very weak form, becouse although there is some indication which suggests language influences thought, the influence is not as great as some researchers would like it to be, and it is not conclusive, scientific evidence.
In congitive science there are known to be many kinds of non-verbal thought. If you are interested in this in more detail, i reccomend reading Pinker's The Language Instinct.

I highly recommend that you read Stephen Pinker's The Language Instinct - in one of the chapters he addresses this exact scenario. Apparently studies have shown that this sort of case-by-case correction has a negligible impact on the child's linguistic development - conversations between adults and regular exposure to language in general are how children learn proper grammatical construction. So - no harm done.

99% of babies learn language in exactly the same way. Even for different languages, children treat language and grammar quite similarly. In truth, you don't really have to "teach" a child to speak. Children will learn language on their own, if exposed to speech.

And, are you implying that more intelligent people (like MIT graduates) are better at using language than others? I think it's actually the other way around. The more education a person receives (like BA., PhD., etc), the less grammatical their everyday speech becomes.

Examples and arguments taken from The Language instinct, by Stephen Pinker.

Your lame website is inaccurate--Steven Pinker addresses this criticism in The Language Instinct, pg. 390, in a chapter addressing the concept of one true "correct" version of English and criticizing the so-called language mavens who make such claims.

&gt;A tin ear for prosody (stress and intonation) and obliviousness to the principles of discourse and rhetoric are important tools of the trade for the language maven. Consider an alleged atrocity committed by today's youth: the expression I could care less. ...
Listen to how the two versions are pronounced: The melodies and stresses are completely different, and for good reason. The second version is not illogical, it's sarcastic. The point of sarcasm is that by making an assertion that is manifestly false or accompanied by ostentatiously mannered intonation, one deliberately implies its opposite. A good paraphrase is, "Oh yeah, as if there as something in the world I could care less about."

The book actually has a diagram showing where the stress occurs in the phrase, which I have not been able to reproduce.

Fellow English major/amateur linguist here. (Don't be sad, literature is cool too!) Geoff Pullum and Mark Liberman write an incredible blog, Language Log, which has taught me at least as much about the subject as any particular university class.

Also recommend Stephen Pinker's The Language Instinct for a basic, high level overview of the different fields--syntax, semantics, phonetics, phonology, morphology, etc. Pinker has a bias toward his particular school of psycholinguistics and he has some not-so-nice things to say about English (the discipline), but he is nonetheless a highly entertaining read.

Anyone interested really in this ought to read "The Language Instinct" by Steven Pinker.

Steven Pinker refers to this basic-level medium for thoughts as 'Mentalese' in The Language Instinct.

I very much enjoyed The Language Instinct by Steven Pinker.