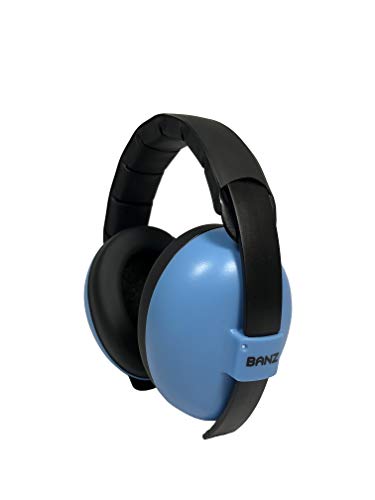 Industry Leading Noise Reduction Rating – NRR 28dB. Block harmful noise and protect hearing. Your purchase supports local small businesses in the USALightweight & Durable - These are perfect for sporting events, car races, music concerts, airports, wedding receptions, movies, machinery, fireworks and more! Great for kids with autism as they block loud sounds and other possible triggersEarmuffs designed specifically for children and feature the perfect adjustable headband to fit all ages. Try and you will see why BANZ child sound protection continues to lead the marketCollapsible Design for easy storage and portability. Easily fits in travel bags allowing them to be ready when you need them most. The perfect hearing protection for kids earsSuper soft padding for the incredible comfort. Kids love them! BANZ KIDS headphones feature a stylish design and unique color options.
Check price on Amazon

We got the highest reviewed off of Amazon to use at a wedding. My son was 6 weeks old and slept 6+ hours.. we actually had to wake him to eat.

Editing to add that I saw your other post and I really hope some of the suggestions help. Please keep us updated on if anything works.. as a mother pregnant with my second this is one of my biggest fears once the baby arrives.

I flew my (at the time) 3 month old last summer on an 8 hour round trip XC for vacation, as well as some other flights. In my experience, it's been easy peasy. Here's what makes it that way:

That is such a UK/Ireland thing where you guys consider that a long distance and we in the US don't. My mother drives over an hour to nanny my brother's kids, one way. And thinks nothing of it (they reimburse her for gas). 40 miles is nothing for family to drive to visit if they want to visit, but it's vast if they don't want to.

You might want to look into noise blocking headphones for babies and toddlers for the footie matches. That way you won't have to worry about the screaming damaging hearing. They are pretty cheap and it might be fun to have your mother buy it, tell her it's so they can take the baby to the games and I bet your stepfather will especially like it, it's confirmation of the relationship you want him to have with your kiddo https://www.amazon.co.uk/Banz-Mini-Earmuffs-Months-Blue-x/dp/B007BEHSDU

This is what I tell my SO. We love going to shows/concerts and he thinks that will change... well guess what, it won't because I just bought these: baby protection headphones

We had these on our registry and my son has worn them to maybe a dozen games at this point. He seems to like them just fine. We started taking him to games at ~4 months and he's about 17 months now and they've always fit nicely.

You could always get a pair of BabyBanz (on Amazon). We use them when we go to the movies with our 3yo to protect her hearing. Obviously it looks a bit weird, but I figure it’s better than our kids ending up with tinnitus like I’ve got. Here’s a link to the 0-2yo version; they also have a version for 2yo+ as well. https://www.amazon.com/dp/B007BEHSDU/ref=cm_sw_r_cp_api_i_HG6jDbG08MZ63

I haven't personally tried these, but they look like they would work great for nursing babies. I hate pumping and washing bottles so I've always just fed from the tap haha. Another thing you can do is my husband and I will go to a matinee of a movie and use baby banz. That way baby isn't bothered by noise, it's usually emptyish during early showings, and tickets are cheaper so if I have to leave if baby starts fussing I don't get too upset on wasted ticket money. :)

Baby Banz. They don't kill all sound, so can be worn at home as much as at a concert.

We took our LO to his first concert at 2 months old. It was at a huge music venue that holds 30,000 (and it was sold out). I wore him in a wrap and he had infant headphones on to cancel the noise.


As for tips, Be prepared to leave early. You may or may not have to, but it's nice to be mentally prepared to miss some of the show. Also, choose your seats accordingly so you aren't disturbing others when you do need to move around.


People are probably going to stare and/or make rude comments. I had one guy look right at me and tell me I was a horrible mother and that I was making a huge mistake. But, a few minutes later some lady pointed right at me and screamed "a baby at a concert! Yes!!! Break the mundane!!!"

These got us through plenty of Dbacks games this year, 4th of July fireworks show and a preseason Cards game with our little one. Slept through some loud noises without a problem.

Whoa whoa whoa- you guys have got to be kidding. Do you know how bad you can screw up your kid this way. Make sure to get some hearing protection in there- a nice set of ear muffs can go a long way. http://www.amazon.com/Baby-Banz-EMBB-Hearing-Protection/dp/B007BEHSDU/ref=sr_1_1?ie=UTF8&amp;amp;qid=1450458329&amp;amp;sr=8-1&amp;amp;keywords=baby+hearing+protection

Is this uncommon in the US? I figured it'd be popular with any sort of stadium event.

[You'll want to have head phones for the baby] (https://www.amazon.com/Baby-Banz-EMBB-Hearing-Protection/dp/B007BEHSDU) - indoor arenas are VERY loud.

Other than that -go for it.

The ones in the pictures are from baby banz

They seem to be ok...my daughter hasn't complained. I initially bought the Em's 4 bubs earmuffs, but they're no good. The front strap will slide down and cover her eyes.

Yeah, it's a huge industry, at least in North America. Search query "baby ear muffs" and you'll see what I mean, for e.g. http://www.amzn.com/B007BEHSDU

I have no advice lol. Only my recent experience. Keep in mind this is for a kid who already sleeps through the night (i.e. 8pm-6am... sorry).

So: our LO is 4.5 mo and we just traveled to San Francisco for five days (3hrs behind us here on the East Coast). We didn't prep anything...we just kinda went with it.

His bedtime is usually at around 8pm. In general while on the trip, he got cranky/tired right on time at around 5pm. We basically treated it as moving naptime and got him to fall asleep in the stroller or carrier. We either had a bottle with us or I found a quiet place to pop him on the boob to help soothe him. Then, we kept him out with us asleep in the stroller and just got him in his pack and play whenever we got back to our hotel at night. We were there for a wedding so we really had no choice and had to keep him w/ us for rehearsal dinner, ceremony, etc.

Because he was out with us I don't think he necessarily slept as hard as he would in his crib at home, but he was tired so he was still sleeping harder than just a regular nap. Pro tip: bring some noise canceling headphones in case you're at a loud venue like a wedding and want him to sleep longer.

Because he wasn't sleeping as hard, he'd usually wake up naturally as we were getting back to the hotel (no later than 9 or 10pm). We'd change him into his pj's, play for about 20min, breastfeed, read a book, and then try to get him back to sleep in the pack n play. In my mind we were trying to get him into the mindset of "bedtime" so he'd sleep longer.

Whatever the cause, it worked and he got usually a full nights sleep and was up at about 6am every morning.

For whatever reason, he definitely got tired/cranky 3 hours earlier (i.e. right on time w his east coast bedtime), but did not affect his wake-up time in the morning. He still woke up at about 6am. I think it's because we weren't truly putting him in "bed" at 5pm, we kept him out in the stroller.

I got my son these: https://smile.amazon.com/gp/product/B007BEHSDU/

he hated them for about 5 minutes and then lazer focused on the game.

No idea...but I did find these for our 2 week old when we went and saw fireworks. She was pretty chill about the whole experience.

They seem to fit his giant ass cranium pretty well

We got these for my LO when she was a month old and we wanted to go see fireworks on the 4th of July. They seemed to work fine, but haven't had a reason to use them since.

FYI - If noise is a concern, you can always pick up a set of headphones before you go. We have these ones and they work great. We've used them at outdoor festivals, loud restaurants, etc. and they seem to work out well.

Hey there, these ones work great. We've tried them on a 6 month old and she didn't try to pull them off or anything.
http://www.amazon.ca/Baby-Banz-Baby-Boys-Newborn-Protection/dp/B007BEHSDU/ref=pd_sim_ba_2?ie=UTF8&amp;amp;refRID=0N61QC531QJPJHE4RG0B#productDetails

Oh I hope they're useful to you and your LO! I got them on Amazon they aren't the cheapest but they seem to last until toddler age.

We have the Banz muffs for our girl. It says 0-2 years and she wore them starting around age one when we took her to some drum corps shows.