We found 9 Reddit comments about Intex Explorer 200, 2-Person Inflatable Boat Set with French Oars and Mini Air Pump. Here are the top ones, ranked by their Reddit score. 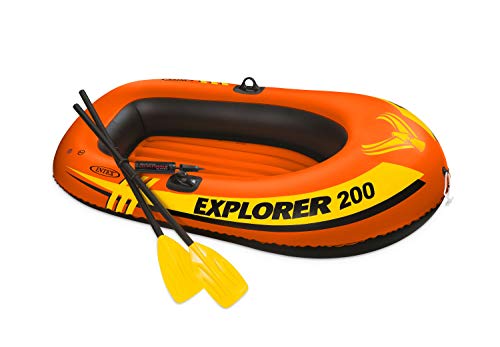 It might sound dumb, but these are pretty popular in the canyoneering community. They weigh 5 lbs (their biggest downside), but are really stable and can handle some lower class whitewater stuff, provided there's no rocks to scrape on. I have and have seen others run rapids in the Grand Canyon on these things. The best part is they're only $20. Most people I know grab aftermarket lighter paddles with them though.

This raft is only $20 and would be a lot of fun to take with us camping (we love going to this Nat'l Park). It would be the perfect size for my Tiny Turtles to learn water and boat safety, and honestly, I'd have a blast playing around with it as well (esp. taking it down one of the many nearby rivers for something a bit more adventurous!)

How far out is it? I used this inflatable boat as a dinghy last summer and it worked fine. Cheap and functional as long as the water isn't too rough and you're not super far out.

Packrafts from Supai Adventure Gear are pretty commonly used by people crossing the Colorado river inside the Grand Canyon. They are cheaper and lighter (but less capable in whitewater &amp; less durable) than Alpacka rafts, and should work fine if the place where you cross the river is calm. You'll need some cheap paddles too, of course.

For a cheaper but heavy option, I have heard of people using inflatable boats by Sevylor, like this one. The advertised weight on Amazon is ~7 pounds, compared to ~1.5-2 pounds for the Supai rafts, but they also cost a lot less.

If it were me, I think I'd make my decision based on how much other weight I needed to carry. If you're already going to have heavy packs, maybe it's worth the money to get a much lighter and more packable raft...I own the Supai Matkat raft and personally think it's pretty perfect for things like you want to do, but it's definitely not cheap.

Intex cheap ass boat. Get a crappy 2 person boat and load up your gear for a little paddle. Don't try and swim with your gear it's a recipe for disaster. I've used this particular boat as a joke on a 15 mile kayak trip. It was funny for the first 3 class 2 rapids, then it got old really fast. You can easily use this for a 700 m paddle. Don't swim it though it's going to be a bitch keeping your stuff dry and not drown.

This is what Pmags used to cross the Colorado in Canyonlands.

Nah bringing the raft in case it rains