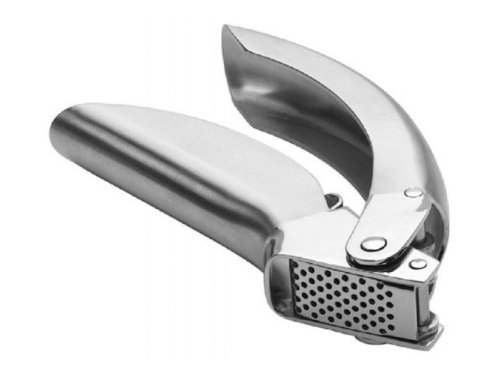 Powerful lever does most of the work for you.60% less effort needed.Press peeled or unpeeled garlic cloves.Stainless sieve hinges out for easy cleaning.
Check price on Amazon

The fuckwits railing against garlic presses are the same fuckwits that want us to separate eggs with our fingers. It's like if you don't make a mess out of your hands, you aren't a real chef.

The argument about "wasting garlic" also tickles me pink. A head of garlic costs what, 70 cents? And you use how many cloves a day? I cook a couple meals a day and I'm hard-pressed to use up a head of garlic before it gets too dry to work with.

I also love people who say "it takes up too much room" as if they're backpacking with the fucking things. Maybe you live in a dorm, maybe you live in a submarine, maybe you live in a Toyota Tercel. If you live anywhere else, your kitchen has at least two drawers and I'll bet your silverware fits in one of them. What fits in the other drawer? Fucking everything else. If you don't have room for a garlic press in your life, fucking move. You're a grownup, get a real kitchen.

Then there's the "it's messy to clean" argument. Grow the fuck up. You pop a clove in, squeeze the bejeesus out of it, pass a knife over it, turn on the water with one hand, rinse the knife, flip the press backwards, hook a finger into it under running water, and put it in the dish strainer. Know what else needs to be cleaned when you use it? A juicer. a can opener. A knife. A plate. It's been my experience that the people who bitch about cleaning garlic presses are the ones that pre-measure their spices into little glass dishes. Fuck off.

But really, you know what? Garlic presses are fun. The only thing that beats them are meat grinders (which also take up a lot of room and are also awesome you whiny little bitches ever made bacon sausages I rest my case bitchez). You get to use your manly gripping strength to reduce an intricate and pungent little gem of nature into mutherfucking paste. Again and again and again. It's like cracking walnuts only without the crack and with tasty tasty putanesca as the result. Yeah, I can be a bitch and get out my fiddly little knife and cut fiddly little slices of fiddly little garlic so I can toss them in fiddly little olive oil and fiddly little stir them so they don't burn, but that's what bitches do. Heat, squeeze, clean, done. Grunt grunt, oooh yeah. In the amount of time it took you to cut your garlic into slivers I've made the sauce, boiled the pasta, eaten dinner and fucked my wife. And now your fingers smell like garlic whereas mine don't 'cuz that press that's such a bitch to clean? I can do that under running water and get on with my life. You, on the other hand, are stuck with a 4" Henckels and a jeweler's loupe because you're taking cooking instructions from Goodfellas. Douche.

In their defense, most people who hate garlic presses hate them because they're used to prissy pieces of shit or semi-functional testaments to dollars over sense. A garlic press should be like a hammer - heavy, ugly and utilitarian. If you aren't comfortable driving a nail with it, don't let it near your food.

And that's about all I have to say about garlic presses.

It's not in ingredients, it's the equipment. The french wardrobe of the kitchen is the battery de cuisine.

I hated them too until I found http://www.amazon.com/gp/aw/d/B0000CD0HX. It's amazing. Can press cloves with or without skin. Cleans easily. I use it every day and it's super low maintenance and just works.

Sauce recipe was adapted from here.

I use it nearly daily and throw it in the dishwasher. It looks brand new after several years. Previously I had broken and carroded garlic presses.

I consider it one of the best purchases I've ever made for my kitchen (and it came recommended by America's Test Kitchen/Cook's Illustrated if I remember correctly!)

It's a little expensive, but damn, it works perfectly and is pretty easy to clean in my opinion. I cook with garlic MUCH more frequently after purchasing this. I like to be a purist and use a knife for things... but this was a game changer for me personally. I absolutely love it.

This is the best garlic press on the market.

A lot of home cooks that think they know what they are doing will tell you to use the knife method all the time. (These are the same people that will tell you to always use fresh tomatoes for everything.) The reality is that garlic presses still have their place. Each method provides a different texture. A good press is also much easier and faster to clean than a knife and cutting board and is invaluable if you need to produce a large quantity. That said, it is a niche tool and you can probably do without it.

I always deplored the garlic press, until I was gifted this one. Its amazing.

Thanks, good addition. I have a mandolin and when I'm doing certain things (e.g. french onion soup) I'll get it out. I should use it more often.

I have the Kuhn Rikon Epicurean Garlic Press (I think from Cooks Illustrated's suggestion?) and it works for me. The press plane flips out and it's almost trivial to clean.

Looks like it's this guy (as it's also available at the dreaded BB&amp;B).

Not to criticize /u/OliverBabish (of whom I am a gigantic fan/evangelist) but don't get that garlic press. If you're gonna get a garlic masher, get one that is easier to clean than the "bucket masher" one he got--digging around in the holes to try to get all the garlic skin out is a stupid waste of time. The best that I've tried are the ones that have a pressing plate that lifts out and can be scraped on both sides (like this guy or it's fancier all-steel older brother).

I have (and love) the stupidly expensive 'older brother' press but it was even more expensive because of all the other shitty garlic presses I bought previously. Buy once, cry once, I always say.

Oh man, got a Khun Rikon Epicurean this past Christmas. Going craaazy with the garlic :D

Sure, why not? No doubt whatsoever that it would work:

Then add one of these:

I bought it off Amazon for $22.99 about a year ago. In the review video, they said the price was $35.99. It looks like the price has been up since last August

Maybe Kuhn Rikon jacked up the price due to the good reviews, or perhaps there is just less discounting because it has become popular.

I totally agree that it is pricey, but I will say that it is really well built, and works great. I am glad I didn't pay $45 for it though.

I’ve used the Oxo, which was very effective, but still kind of a pain to clean. This style was a big upgrade for me because it completely flips apart for cleaning, and it takes less force to use.

I use this one. It's super easy to clean so long as you clean it soon after use, otherwise you may need to soak it first.

Two items you need are a garlic press and garlic peeler. This is a fairly highly rated garlic press. And this absurd little thing does an astonishingly good job of peeling garlic.

I felt the same way, primarily due to how much trouble they are to clean. I had gotten rid of every press I'd ever tried until I found this one through an ATK equipment review. Its design is pretty ingenious and allows it to be cleaned in just a few seconds.

Get a good garlic press. I recommend this one. Also scrape the cutting board with the back of the knife. I see way too many cooks dulling their knives that way.