Reddit reviews Parasite Rex: Inside the Bizarre World of Nature's Most Dangerous Creatures

We found 25 Reddit comments about Parasite Rex: Inside the Bizarre World of Nature's Most Dangerous Creatures. Here are the top ones, ranked by their Reddit score. 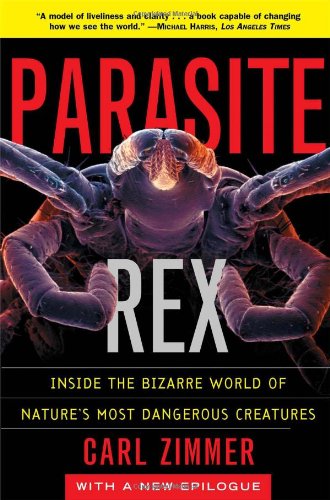 25 Reddit comments about Parasite Rex: Inside the Bizarre World of Nature's Most Dangerous Creatures:

I mis-spoke when I said no known effect. It has some effect, but in healthy people it's minimal and often goes unnoticed. It can cause a slight fever and mild flu-like symptoms while the parasites are 'in bloom'. But in everything I've read(remember I'm a layman, I've just read a bunch of books and articles about parasitic evolution) the consensus is that a healthy person, with nothing to compromise the immune system, will not be able to tell when the parasites are active. Also, once you have Toxoplasmosis, you pretty much have it for life. You can look forward to those blooms every few years(I can't remember if there's a regular period they bloom, but I remember 7 years being mentioned in one of the books), but otherwise they hibernate and do nothing to you physically. If the woman is otherwise infected and the parasites are hibernating, I don't believe it would do anything to the fetus.

Now, there is some discussion about what this parasite does to the human brain in terms of psychology. Nothing has been proven, and it's all theoretical(highly debated theories, at that), but it's been proven that in rats it lowers risk aversion. Rats bred in captivity, even rats that are several generations removed from ever seeing a cat, will instinctually avoid the smell of cat urine. If you put rags with cat urine on them in a maze with rats, the rats will run from them. A rat infected with toxoplasmosis will express curiosity in the rags, and even go so far as to use them for nesting material.

There's evidence that it does something similar to people. According to some psychological studis, Toxoplasmosis carriers are less risk-averse, less likely to worry about social norms, and more likely to be individualistic, and more likely to engage in extreme activities like sky-diving. This is far from conclusive, though, and people like to grasp onto that fact when looking for a sensational story.

But yeah, parasites are known to influence their hosts, whether that's noticeable or a gradual evolution. We aren't separate from any of this. If life is an ocean, mankind isn't an island, it's a current.

Sorry for the wall of text. If any of this is interesting, I highly recommend the book Parasite Rex. It's really interesting and entertaining.

If you haven’t read Parasite Rex, please do. Lots of beautiful horror inside, and it’s a fascinating read!

I don't doubt Cronenberg's hunch that Alien took some notes from his work.

But for what it's worth, the natural world did it first. Parasites affecting behavior and general body horror is old hat.

My "favorite" is the Entomophthora muscae fungus, which, after infecting and killing a female fly, make the fly's corpse irresistibly sexually attractive to male flies, who will readily try to make with the dead, infected fly rather then healthy living females. Thus the fungus is passed on.

Imagine a Cronenberg film where a fungus-ridden dead woman turns the men around on so much they have to stop everything and fuck her corpse.

If you liked that, you'll love The Red Queen by Matthew Ridley. A popular science book about exactly that. There are things to gripe about in that passage, but I understand it's an aside in a novel that's not about biology, so I won't.

EDIT Not directly related, but a fascinating book on parasites can be found courtesy of Carl Zimmer.

Toxoplasma gondii is an amazing and mindblowing parasite. It has two main avenues of propagation: when its host is killed and eaten, it can infect the consuming animals; and in a female host, it can infect offspring during gestation.

Human males infected with toxoplasma exhibit lower intelligence and much higher aggression and risk tolerance, making them more likely to get into fights and potentially be killed.

Human females infected by toxoplasma exhibit more sexually inviting behaviors and are more sexually adventurous than uninfected populations. Studies show that infected women are actually seen as more attractive by men. They also show higher risk tolerance, with the end result of these changes that infected hosts are more likely to become pregnant.

Some estimates have up to a third of the world's human population infected with this parasite.

For more on this and other horrifying/fascinating examples of mind control bugs, pick up a copy of Parasite Rex

Treatise On The Gods by H. L. Mencken.

Art Of War by Sun Tzu.

I have one more that is most definitely not academic, but was my introduction to paleopathology as an amateur interest: Rosalie David's Conversations With Mummies. Another one I picked up one sale close to fifteen years ago, which had a profound effect on me. She talks about some of the most important cases that shaped the field, and several chapters are more comprehensive studies of a single person. It covers some of the processes involved in paleopathology, and how the field has developed, with technology allowing archaeologists to study people and specimens while still preserving their integrity. It's starting to get a little bit old, but it's still a fascinating read with lots of pictures. Sorry these are Amazon UK links; I'm not sure where you are, and it's probably a good idea to cross-reference with Amazon US. British books look deceptively affordable, but the last time I made a major order for thesis-related reading materials, I spent over $100 without even thinking about it!

Oh, and if parasitology is your thing too, David's book has a fair bit about it. A friend of mine who's a marine parasitologist (I'm not sure if that's his official title, but he studies marine parasites) recommended Parasite Rex to me, and I devoured it in a few days (poor choice of words, I know). It's more pop than academic but I enjoy reading anything that will bolster my understanding of something else.

And thank you, for your recommendation. Hubby started med school this year and I'm on the hunt for possible Christmas presents. This looks like something both of us would enjoy.

It's about how parasites rule the world. It'll make your skin crawl.

If you don't care, don't bother.

Some people write poetry, I think about gods.
If I'm enjoying myself, am I still wasting my time?

I'm also reading a book about parasites. It's good stuff, check it out.

This is an awesome book on parasites
Parasite Rex

Parasites are really fascinating. If you want a neat book on them, check out Parasite Rex. It sucks to be an insect.

I mean, it sounds like you've got enough on your plate, but you ever read Parasite Rex by Carl Zimmer? AWESOME book on parasites.

I really liked Parasite Rex, but I am a bit of a Bio nerd.

What about human mind control?
http://en.wikipedia.org/wiki/Toxoplasmosis#Behavioral_changes
Suicide by parasites?
http://www.youtube.com/watch?v=EWB_COSUXMw&amp;amp;eurl=http%3A%2F%2Feducatedearth.net%2Fvideo.php%3Fid%3D2770

For more about parasites, you might enjoy Parasite Rex.

And you'll definitely not want to read Parasite Rex. 320 pages of NOPE by Carl Zimmer. Actually, you'll be glad you did. Fascinating book.

Read Parasite Rex by Carl Zimmer and you'll gain a new, albeit weird, appreciation for the complexity of parasites.

Now, mosquitoes aren't parasites, but it'll answer/complicate your question as to "do they serve any purpose in the ecosystem" [Spoiler: yes]

I was reading Parasite Rex a while ago. It's about parasites and all sorts of crazy things they can do, and make their hosts do. Like evading immune systems. And mind control. (Real-life zombies! Almost.) It goes into a lot of detail, but is relatively easy to read.

According to this author 75% of all animal species are parasites

Got any book recommendations on the subject? I heard Parasite Rex was good but I haven't gotten around to buying it.

Why in the world would you pick on parasites? We need those!

If you think that's weird you should check out this book. It's a really good read and full of WTF parasites.

Hey, at least you know you worship a bastard. That level of self-awareness is rare; most insist their god is a great guy as long as you follow the version of religion they are pimping.

But we know that creation mythology is false, things were never "perfect". Parasites, bacteria and viruses evolved right along with everything else, for example. And then there's the myriad extinction events, including this one. It happened about 70,000 years ago and wiped out most of the humans on earth, we can see the effects of it on our genes even today.