We found 9 Reddit comments about Simplicity Parenting: Using the Extraordinary Power of Less to Raise Calmer, Happier, and More Secure Kids. Here are the top ones, ranked by their Reddit score. 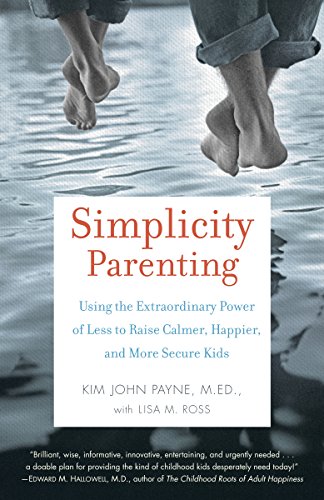 Dad of a seven- and two-year-old here, and here's what works for me. It's based on three observations.


(1) Generally, children are able to pick-up for the number of minutes that equals their age. So my seven-year-old can clean for seven minutes, and my two-year-old for two.


(2) Children (especially very young children) are much more likely to pick-up toys if the toy receptacle is small and is can be moved to the spot of the mess. For example, our blocks go in a small basket; and picking up the basket, setting it next to the blocks, and saying "put the blocks in here," is much more effective than having a large, general all-toy bin sitting in the corner and saying "clean up your blocks."


(3) Children tend to play with one type of toy at a time, get bored, and move on to another type of toy without first cleaning up. This means that a messy room is usually a bunch of discrete messes.


So whenever my wife or I observe a discreet group of toys that is not currently being played with (e.g., cars), and whenever it will take the child less than "their number of minutes" to clean, my wife or I will say something like "carry the car box over to your cars and clean them up . . . good, now put the car box back on the shelf . . . okay, now, do the same with the blocks and the block basket, good, thank you." The child has to stop whatever they are doing and pick-up those toys immediately, and only then may they resume playing at whatever it was they were playing before.


Now, the catch is this: if the mess will take more than the child's "number" for the child to clean, my wife or I clean it ourselves without scolding the kids; we figure it was our fault for letting the mess grow beyond the point where the child can himself clean it, so now it's on us because we were being lazy about enforcing our own cleaning rule. We find that the problem usually isn't that kids won't clean; it's we as parents don't consistently enforce an easy-to-follow cleaning rule. With the rule I described above, the incentive is for the parents to make the kids clean bit-by-bit throughout the day, which helps the kids form a cleaning habit and helps the parents learn to enforce the rules consistently.


So if you allow your children to create havoc, and you allow that havoc to drive you to the point of dramatic gestures, I think that's on you, not the kids, and you need to check yourself before you wreck yourself.


Edit for grammar and this:

I've been doing a lot of "time ins" rather than "time outs", where I sit with him and we discuss what went on for four or five minutes. I try to focus a lot on how his words made me feel, and ask him as well what he was feeling when he said those words.

What does he watch on TV? I've seen behavior affected significantly by what kids are watching, there's even a good study on how watching "Arthur" make kids have MORE conflict rather than less. I try to stick mainly to PBS shows and I screen potential shows using the Common Sense Media site to help me decide if things are age-appropriate.

I try not to cave on my policies, so he knows what to expect every time he challenges me. I noticed, for example, that when I had no strict policy for TV watching I was getting temper tantrums daily. I realized it was because he didn't know what to expect. Sometimes he'd ask for TV and I would say yes, sometimes I'd say no. I knew my reasons, sort of, but actually writing them out helped me clarify them and helped my son understand, his tantrums on this subject dropped immediately after I wrote out my policy and explained it. (Loosely, my policy is that he has to have at least an hour of active or creative play and at least thirty minutes of quiet time, as well as picking up all his toys before he's allowed ANY TV. He can then watch up to two shows.)

Snacks are another thing I have figured out policies for. After lunch he can choose cheese, nuts, or fruits/veggies for snacks, but after 4pm he can only choose fruits/veggies. I've also read of people keeping a snack drawer in the fridge and the child is allowed to pick two or three or unlimited things a day of their choosing out of the drawer. If they've eaten all their yogurts, however, it isn't getting refilled until next Saturday (or whenever).

Honestly, being predictable in as many ways as possible is very, very helpful for kids. If you can find them in the library, I'd also recommend looking through the books How to Listen So Kids Will Talk and How to Talk So Kids Will Listen and Simplicity Parenting. They have both really helped shape my parenting.

I would highly recommend the book: Simplicity Parenting: Using the Extraordinary Power of Less to Raise Calmer, Happier, and More Secure Kids. It gave us some great strategies!

Thank you! And, great question! I have several thoughts on this:

Engage your kids. Now that clothes are done gather all the books and divide them by kid and sit with each one and ask if they want to give it a home on their shelf or give it to a kid who would like it more or be more age appropriate for. My 7 year old doesn't need the baby books any more so she purged those along with those with topics that don't interest her any more.

We did stuffed animals after clothes and she got rid of 50%. The big thing for her is that I remind her that if she keeps it, it needs to have a home in her room, not just piled in the corner or in a tub. She will pick the "easy" items first, those she knows bring joy. Then the shelf is full and she isn't interested in making a "home" for what remains and is okay with putting them in the to-go bag.

We preserved the Legos and Playomobil (two or three sets total) and she sorted through the rest of the toys, mostly Happy Meal quality small plastic crap and old crafts. After she selected the good stuff she was ready to move on and I told her we had to finish but she was allowed to decide that the rest could "move on". She picked out three more small items, said the rest could go and went off to play with friends. I put the rest in a trash bag and put that out of sight (so she can't go back). So far no complaints, just lots of positive attention from visitors for having such a peaceful and tidy room. Still plenty of books and trinkets but with room to breathe.

Edit: also this book, Simplicity Parenting, address the obwervation you made: being overwhelmed by too many toys.

Simplicity Parenting has a wonderful chapter about toys and how keep them meaningful but under control. It's a fantastic book.

This is a great book:
http://www.amazon.com/Simplicity-Parenting-Extraordinary-Calmer-Happier/dp/0345507983