Reddit reviews The $100 Startup: Reinvent the Way You Make a Living, Do What You Love, and Create a New Future

We found 31 Reddit comments about The $100 Startup: Reinvent the Way You Make a Living, Do What You Love, and Create a New Future. Here are the top ones, ranked by their Reddit score. 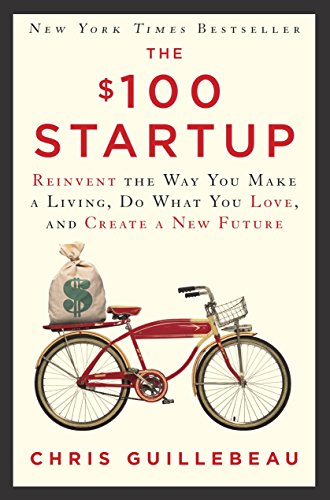 31 Reddit comments about The $100 Startup: Reinvent the Way You Make a Living, Do What You Love, and Create a New Future:

First if there is enough potential profit in your idea you can always hire engineers, programmers etc. So keep that in mind and start keeping a list of every idea you have, I keep one in my phone that is gigantic now. Stop limiting your self to just what you can do and it will really open up your mind.

I would recommend the $!00 startup, it is full of case studies on what others have done. After reading this book it seemed like I just started thinking in an entrepenuerial way about almost everything and ideas came like a waterfall. I now have more solid ideas than I can possibly ever pursue, and get new ones daily.

Another great one is Lean startup. It has the most practical advice I've encountered on how to test and then go forward with an idea. After this book I was able to mentally test ideas and see profit or failure in them much easier. This book is also invaluable for once you actually start something.

This book: The $100 startup is insanely motivating and outlines all the things you need to make it happen.

The $100 Startup by Chris Guillebeau

You have some ideas that remind me of this PDF (48 Low-Cost Business Ideas).

Take a look at Chris Gullibeau's $100 Startup for inspiration, too.

I've read a lot of business books in the past year. These include:

Secrets of Closing the Sale

How to Master the Art of Selling

The $100 Startup is very inspiring, especially for people who have no chance at securing a "normal" job (I dropped out of college). The Toilet Paper Entrepreneur is also very informative. But out of this list, by far, my two favorite books are The Compound Effect and The Slight Edge. #1 going to The Slight Edge. Read this book. Maybe it won't apply to everyone as much as it did to me, but it totally changed my attitude towards life.

It infuriates me that there are so many people that NEED "capital" in this thread.
You need virtually ZERO cash to start a business in this day and age.

Check them out and let me know what you think.

After some searching, looks like it's from "The $100 Startup" by Chris Guillebeau.

If you are looking for a deeper understanding of how to build and start a business at lower cost and risk, I would recommend reading: "The $100 Startup" or "Side Hustle". Resources like these advocate finding markets through low cost, low risk attempts to find customer interest and build entrepreneurship skill.

While the furniture business may be viable, your lack of experience and the initial capital investment may make that a better business after you have more confidence in how you can build and develop.

I'd suggest reading one of these:

I honestly suggest this book to you.

It's about people starting from scratch with almost no basis to stand on. It's about people who started with literally nothing. No job, no education, no anything. It's also about people who gave up everything they did and simply followed their passion. Just a few days ago one of the guys that was interviewed for that book did an extremely successful AMA on reddit. The book motivates you with those people's stories and explains in great detail what they had to do to get there.

Really, you can make your own job. You will feel better about yourself because you do what you love and you most likely will make money (at least more money than when not working at all).

Seriously, if you really can't do anything... start knitting stuff. Start a pottery course. Start honestly learning new stuff and make an internet-guide for learning it.

Dude, even if your one and only passion is computer games: Start a review-blog. Start playing WoW and film yourself solving quests while commenting them. People will watch this.

Start a local natural protection group. Apply for government grants to renovate barren public land by building natural habitats. Plant native trees, dig a hole for a small lake Go around in your neighbourhood asking people to donate money to protect local parks and wildlife. There is so much you can do. Things that can make you feel better about yourself and your life. Things that earn you money. And even things that make other people like you. Sometimes even all of these things at once.

In response to your second two points, have you read The $100 Startup?

You don't need to have a lot of money to start your business. What you need as was already mentioned is the right mindset and a solution to a problem that people are willing to pay for. I love some of these websites and books and recommend giving them a look.

To avoid copyright infringement you can't use anyone else's copyrighted work, like music or images without clearance (paying them for it and getting the documents in writing).

To monazite it you can look at youtube ads, you can promote products as an amazon affiliate, you can set up premium content that you sell, you can build a brand and sell t-shirts or whatever. Lots and lots of ways. You should read The Four Hour Work Week [referral link] and the $100 Start Up [referral link] for ideas and systems you can use.

I would recommend you to understand the business,
I start my business with this book &gt;&gt;&gt; http://amzn.to/2sio9VS &lt;&lt;&lt; $100 Startup.

Let's continue to refine it together. I need a few more weeks to finish a few things I'm focusing on but then we can really dive in and see how we can break it all down and make it easy to digest.

I definitely want to dive into the social community aspect more and the identity side, two components which I believe are very strong in why we play.

For Bali (or travel in general...) it's all about perspective. A villa in Bali is around $300-400/month and food is cheap (like a dollar for a bowl of Pho). It's completely realistic to live in Bali for $10/day. To live really well (like a King) it would be less than $1000/month.

Now the benefit I have is that I'm still able to work while I travel (I have a few streams of income:

Your post made me think of $100 startup. I'm not sure if it's something you are open to, but could you keep your same job and start a side hustle doing programming or datascience work? Something else you could bill hourly at your own discretion? Give the book a shot if you think so.

This question is so hard to answer because you could write whole books on the subject.

My first recommendation would be something that pays you more than unemployment. Second, spend some time reading books about shoestring entrepreneurism: A really popular book is the The $100 Startup. A lot of people don't actually like the book, but it will answer your questions fully and the author is a smart guy (and a great marketer).

Honestly, check out The $100 Start Up. It's pretty straight forward and has some cool stories of people starting up businesses with little to no capital and experience, just doing what they love. I'm about half way through and I find it really interesting and refreshing from other business books I've read.

Just bought this book-- may be of some help:

With free webframes, you can start a web business for almost nothing. Check it out!

Really good one for monetizing games:

I did not read the whole way through it, but it's for sure the little money it costs. ;)

I have a business degree. You know what I didn't learn with my fancy degree? How to start a business. This book does that.

Lots of case studies. I guarantee after reading this you'll have a dozen ideas you can't wait to try.

I agree with you on some businesses requiring low financial capital to start. I read The $100 Startup to learn about that, but I found that many still require cultural capital or social capital. Also, too many of use can't afford to spend the time associated with failing and would rather spend time trying for standard jobs.

You are totally wrong with this. To build up a community while creating an open source project, its better/easier to keep people updated with what I'm doing while I'm working on it. This will build up an elite community around the project and when it will be stable, some developers will already like to contribute to it, if the project is good enough.

There is various books related to that topic including the 100$ startup.

Also, this project is separated in multiple projects because they are multiple projects. For example, it will be possible to use the sharding project without using everything else. Same goes for each of these 5 sub-projects.

By fragmenting the big project in smaller one, it makes each part easy to use separately, which make the code highly re-usable, scalable and maintainable.

Symfony2 and Doctrine also tries to separate packages. For example, I used the Annotation package of Doctrine inside my own project. This was possible because they made it a separate package at first.

Sorry to hear about your troubles!

Hmm, for job hunting I'd recommend:

Break The Rules: The Secret Code to Finding a Great Job Fast

It has the best way of looking at "selling yourself" to people I've ever seen in a book. Plus it came out in 2001 and you can buy it for a penny + shipping.

If you're interested in working for yourself (starting work now, not waitin around), I'd recommend:

Or anything by Robert W. Bly. The guy's a genius.

For idea-generating for non-writing self-professions, I'd recommend:

The $100 Startup: Reinvent the Way You Make a Living, Do What You Love, and Create a New Future

If you create your own start-up, Bly has a marketing book too. I'd get that. Anything business-related written by the guy is worth its weight in gold.

If you don't see a job in sight, I would highly consider self-employment, just because you can start today. I think it's great that anyone, anywhere can say "I'm now employed" if they want to. There is responsibility for paying yourself, of course, but now no one can fire you, and they don't take a percent away from your earnings. You get all the kickback. And it's not a pyramid scheme-ish company like Amway, where layers of people are all getting a chunk of your profit (just like any other job you work for other people).

You sound intelligent and experienced; you should go for it if you've got the gumption.