Reddit reviews The Mismeasure of Man (Revised and Expanded)

We found 26 Reddit comments about The Mismeasure of Man (Revised and Expanded). Here are the top ones, ranked by their Reddit score. 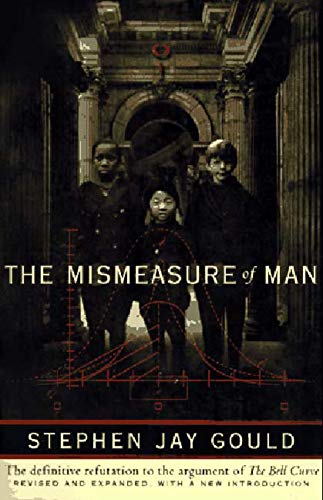 26 Reddit comments about The Mismeasure of Man (Revised and Expanded):

I would suggest that you check out Gould's The Mismeasure of Man, as it gives a nice explanation to your question.

In short Gould discusses how phenotypes (especially intelligence) are dependent on both the genetic underpinnings of the individual as well as the environmental input that individual experienced. (For the geneticists reading this, this is the classic Vp=Vg+Ve).

In order to explain the variance in a phenotype (e.g.: differences in intelligence) between two different genetic groups (e.g.: races), you must make the assumption that there is no contribution of the environment to that phenotype. This assumption is nearly always violated.

The point is that you cannot ascribe the differences in phenotypes to genetics unless you have fully controlled for the environment.

Mirror of Julian Assange's old site, IQ.org. I stumbled on this hilarious site long before Wikileaks existed, and it's why I've never been able to take him entirely seriously.

"IQ" is next to craniometry in terms of what it tells you about an individual's intellectual potential, if you believe SJ Gould. I personally wouldn't want to be in any smarty-pants society that allowed vos Savant and Assange.

Last, there are several societies that claim to be "above" the Mega Society in terms of elite intelligence requirements. You can take them about as seriously as Mega.

That’s his big work about how attempts to classify people on a biological (or really a pseudo biological) basis such as IQ is not only useless but counterproductive, as they often become “just so” arguments hat completely hold up the status quo instead of challenging it.

For the science lovers:

An interesting al though controversial book is Race Evolution and Behavior by Rushton.

The Bell Curve is probably a good one to read too.

For another side you might want to read Gould's Mismeasure of Man.

The TL;DR is that he theorized there are short periods of intense selective pressure rather than pure gradual evolution. While this doesn't disprove that evolution can act on particular genes (which it probably does), it suggests that the reality is a little more complicated than that and evolution can act on multiple levels. He was also very strongly against biological determinism and held that science and religion answer different questions and aren't mutually exclusive (though like any good evolutionary biologist he trashed creationism). He even wrote a book, The Mismeasure of Man, thoroughly debunking biological determinism and scientific racism a decade before that asshole Murray wrote The Bell Curve.

Consider reading The Mismeasure of Man by Steven Jay Gould.

It is a good intro to questions like What is Intelligece? What is IQ? How has IQ testing been abused in the past? [This last has some tragically hilarious examples].

You know what's better than the Bell Curve. This: http://www.amazon.com/Mismeasure-Man-Revised-Expanded/dp/0393314251

You appear to ignore that Murray’s “science,” is, in fact, a turd sandwich.

&gt; Can you give me a source of someone who disproved him and summarize their findings?

Yeah. Just so we're clear, we're talking about Herrnstein &amp; Murray's 1994 book, The Bell Curve. As I'm sure you already know, this book, and its co-author Charles Murray, are among Stefan Molyneux's favorite sources of information about inherited racial differences in IQ.

If you've only heard of The Bell Curve from right-wing pundits, then you may not know that the book generated a brief but intense debate when it was first published. The debate was intense because the authors' claims were controversial. And the debate was brief because everyone quickly realized that the book was trash. The authors probably already knew this, because they declined to publish any of their findings in peer-reviewed journals. In fact, they declined to permit any kind of review prior to the book's publication. In the world of science, this is extraordinarily shady behavior.

As far as I know, The Bell Curve hasn't been in press for at least ten years. Which is a good indication that no one (on the left or the right) cared at all about what Herrnstein and Murray had to say. And that was the state of affairs until a few years ago, when the book's sections on racial differences in IQ seemed to capture the imagination of Stefan Molyneux.

Anyways, for those engaged in the practice of statistics and/or social science, The Bell Curve is infamous as a case study in bad science. The key issues are as follows:

Well, if you actually do have an open mind, you should look into these resources:

You're embarrassing yourselves in a public forum. Being uneducated and racist isn't "cool", you know?

Here. are. some. tools to educate yourselves and stop fumbling about in darkness.

This is an old idea that was discredited before a lot of redditors were born.

Actually I'm spouting shit I read in The Mismeasurement of Man by Stephen J. Gould. I bought it after it had been rereleased after "The Bell Curve" was released. I thought it was written in response to that book, and I was surprised to find out it had been released originally back in 1981. It's rare that a book so expertly refutes another despite having being written 15 years earlier.

&gt; I suspect this is why the left calls all IQ discussions 'racist'.

It was even called racist back in the day. In the 20's and 30's most everybody was fine with the concept and had no issue with it, despite the fact that the science of IQ was in its infancy compared to today. After WW2 though, I suppose on some level, its understandable why the topic became too hot to touch, but in academia from that point, its still been very difficult for the issue to make a comeback. And it's especially a bitter pill to swallow for public consumption.

Charles Murray though is the case in point that everyone likes to point to. He was crucified by (mostly) liberal academics in his line of research. In particular, Stephen Jay Gould who wrote the Mismeasure of Man (which was a direct response to the Bell Curve), which most psychologists and virtually all psychometricians today dismiss. But I don't know enough about the science as a whole to know if what Murray's talking about is true. I'll take it at face value that it is on some level.

&gt; Hierarchy exists as a part of nature.

I agree entirely with this but it is important to remember nevertheless, when more sophisticated people on the left (and I'd like to include myself here just a bit) criticize hierarchy and inequality, we're not talking about natural inequalities for the most part.

&gt; The funny thing is, no one bats an eye that black people make up most of the NBA and the NFL, not to mention are at the elite top of pretty much every track and field event (sans shot put maybe). Apparently in the context of sports it is just fine to discuss, but actually want to talk about things that affect success at life outcomes? How dare you!

&gt; I think you are an example that the overton window is shifting on this. It may not be mainstream, but the data is certainly on the side of those who think IQ is important. I can't wait until it does go mainstream - maybe then we can actually start having conversations about what we (as society) are going to do about all the low IQ people who just had their jobs automated.

It's increasingly getting a lot more steam and mainstream attraction. What I worry about however are the political/economic and social implications of this. People should be free to make of their life whatever they will, but the extent to which our choices and abilities to do what we want to are constrained by our IQ and other factors, makes this very difficult. And will always cause conflict unless its directly addressed. And this is the scary part, because its where you get into subjects about dysgenics and other things.

&gt; This is a huge problem coming up. I don't think either side has particularly good solutions.

The best argument I've come across against the idea that members of different races have, on average, different IQs, is Stephen Jay Gould's The Mismeasure of Man, second edition, chapter six - a response to The Bell Curve. I find it convincing. However, I've found Gould convincing before, only to discover that he was wrong. Gould is notorious for persuasive arguments for dubious theories.

&gt; The theory which seems most likely to me is that women are more emotional than men precisely so that they can read 'nonverbal cues and have general social awareness'

This is irrelevant. You were trying to make claims about autistic WOMEN having a higher degree of social/emotional awareness than non-autistic WOMEN and the opposite is true.

No. People stopped talking about it because it has no legitimate scientific basis. You're making a lot of assumptions about it. If you don't believe me, you're free to pick up some history books about eugenics/craniology/phrenology and learn about it for yourself.

&gt;How do you know that brain-size is not correlated to intelligence within a race of humans?

Because this issue has been studied before and this is what the data concludes. If you can show me some legitimate studies which show otherwise, I'll reconsider my view. I'm not just spouting random emotional viewpoints here, this is actually a topic I've studied.

If you're genuinely interested in this issue, I recommend reading reading this book:

It is among the most interesting books on the history of eugenics that I've read, and explains in great detail the way that the most important eugenic sciences / experiments were conducted back in the time when they were popular.

You may be interested in The Mismeasure of Man. I've only just begun the book so I'm not in a position to say whether it's compelling, but it purports to demolish the idea of IQ.

Go read The Mismeasure of Man and get back to me.

This was settled years ago.

Read this The Mismeasure of Man by Stephen Jay Gould