Reddit reviews The Salmon of Doubt (Hitchhiker's Guide to the Galaxy)

We found 8 Reddit comments about The Salmon of Doubt (Hitchhiker's Guide to the Galaxy). Here are the top ones, ranked by their Reddit score. 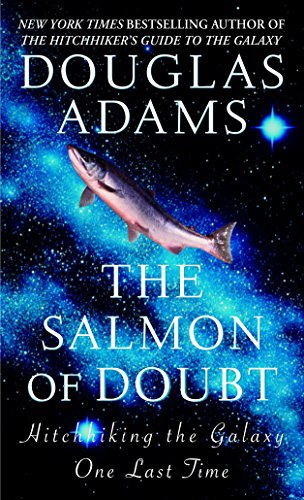 8 Reddit comments about The Salmon of Doubt (Hitchhiker's Guide to the Galaxy):

If you love Adams do yourself a favor and check out "The Salmon of Doubt."

It's a compilation of his scattered writings, words about him from friends, unfinished tales and such... I can't read the damn thing without either laughing or crying depending on what bit I'm on.

It's always a joy to see some small child or engrossed adult hunched over a 'complete' Hitchhiker's "trilogy" binding in airports and in parks even all these years later.

The Salmon of Doubt: Hitchhiking the Galaxy One Last Time is a must-read for DNA's hardcore fans. It's made up of his notes, articles, essays, etc, and worth reading if you want a glimpse into that fascinating mind of his.

Best I've ever heard of these is not mine, but worth sharing, this comes from Douglas Adams in his book The Salmon of Doubt

This actually did happen to a real person, and the real person is me. I had gone to catch a train. This was April 1976, in Cambridge, U.K. I was a bit early for the train. I’d gotten the time of the train wrong. I went to get myself a newspaper to do the crossword, and a cup of coffee and a packet of cookies. I went and sat at a table. I want you to picture the scene. It’s very important that you get this very clear in your mind. Here’s the table, newspaper, cup of coffee, packet of cookies. There’s a guy sitting opposite me, perfectly ordinary-looking guy wearing a business suit, carrying a briefcase. It didn’t look like he was going to do anything weird. What he did was this: he suddenly leaned across, picked up the packet of cookies, tore it open, took one out, and ate it.
Now this, I have to say, is the sort of thing the British are very bad at dealing with. There’s nothing in our background, upbringing, or education that teaches you how to deal with someone who in broad daylight has just stolen your cookies. You know what would happen if this had been South Central Los Angeles. There would have very quickly been gunfire, helicopters coming in, CNN, you know… But in the end, I did what any red-blooded Englishman would do: I ignored it. And I stared at the newspaper, took a sip of coffee, tried to do aclue in the newspaper, couldn’t do anything, and thought, What am I going to do?

In the end I thought Nothing for it, I’ll just have to go for it, and I tried very hard not to notice the fact that the packet was already mysteriously opened. I took out a cookie for myself. I thought, That settled him. But it hadn’t because a moment or two later he did it again. He took another cookie. Having not mentioned it the first time, it was somehow even harder to raise the subject the second time around. “Excuse me, I couldn’t help but notice…” I mean, it doesn’t really work.

A moment or two later the train was coming in, so I tossed back the rest of my coffee, stood up, picked up the newspaper, and underneath the newspaper were my cookies. The thing I like particularly about this story is the sensation that somewhere in England there has been wandering around for the last quarter-century a perfectly ordinary guy who’s had the same exact story, only he doesn’t have the punch line.

You are very welcome to my opinions about taking a group out for an activity(fan, fan, fan). We may be so very close in our views but that just enhances the slight difference in the angles we can see at. My bet is we'll find that difference in angle complimentary on most days.

&gt;...saying someone would enjoy telling me what to expect from a particular activity I was concerned about organizing is new and very motivating.

This is a powerful one, really. Something I'm not sure I've taken enough advantage of. Just think of the floods I can suddenly write when you ask about sailing. It might be part of that principal that I've found almost universal - people want to talk about themselves and the activites we love and water-love are part of that self yet just separated enough to no be too revealing. A person who is inhibited about self-disclosure will usually be completely open when discussing the subjects of their enthusiasm.

&gt;It makes so much sense to do something myself a few times and then invite others to what I’m already comfortable with.

:) That way you get to be the one who can share what to expect, pretty cool, huh? Though with that said, it seems to me that the right group of people should make joint discovery of some new adventure even better than being alone. You are good at understanding others, so I'm sure you'll be able to choose the right paths with the right groups.

&gt;I agree completely about letting others be responsible for their own happiness. I just need to nudge my heart up to where my head is on the matter.

One of the hardest things to do. Knowing and Feeling can defy "being synched up" so hard. Maybe it's a function of the fact that it's not always one or the other is actually right. Let's call this another case where the angle of a complimentary personality's view might help convince your recalcitrant heart. You can provide others all the reasons and motivations in the world to be happy but it really is completely up to them to take that final step, if they don't it isn't your failure.

&gt;Are you less comfortable about some conversational situations than you were years ago?

No, I don't think so. I'm pretty sure I mean to say that as the conversation degrades (imagined or not)due to my errors then my discomfort increases, spiraling the situation downward in my mind.

&gt;I’m not positive of what you’re saying in the vague version[of how you acquired your trade].

Yeah, that bit is kinda jumbled. I think I can straighten it out and remain just the right level of vague but not right now. It will take a bit of time to put together so I'll defer it for a while. If you would rather hear it sooner or I don't address it due to poor memory, just let me know and I'll set aside the time to do it right. Deal?

&gt;&gt;I could be unfit to ply my trade if my honesty were in doubt.

&gt;That seems to be true about all of the legitimate trades I’m familiar with...

And you are correct. In my case I would be, in essence, legally barred and unemployable.

&gt;...operations I’ve dabbled in for fewer years brought the benefits of widening my skill set and allowing me to meet diverse groups of wonderful people.

It is just plain inspiring to hear your positive take on things,including your life in the mines. The way you benefit while providing benefits to others, seemingly no matter what. That's quite a story of mining you have to share, even in the short and vague version. Do you think your current mine will wind up with you in the historian's seat once again? Do you think you might be willing to occupy it for a longer or shorter period?

&gt;... I see one [a parental figure] in Lost too, though, because that person for me is Locke.

That is a very good point and an angle I hadn't fully seen. It must be nearing time for another viewing, I'll just put that in my schedule :D

&gt;Maybe the lighter element in Firefly arises from...opposite of what the Oceanic 815 survivors could ...Maybe there are flights-of-fancy elements to character interactions in Firefly that mirror their ability to fly, and determined groundedness to some of Lost’s characters’ relationships because they are stranded.

All of this! AND, I now think, the fact that the ability to fly or not is present fully reflects a (possibly consciously decided) philosophy of the fictional world presented. The titles alone provide an instant tone for the story being told &lt;--- that feels like a bit of a revelation to me right now, hm. =|

&gt;Maybe the best story tellers ask how the story has always been told and how the elements that speak to our tribal hearts can remain while the vehicle for delivering them is shaken up and turned on its head.

I think you've got something there. I wonder how often said storyteller actually ask themselves that question. It seem some probably just live the question-- seeing all things shaken and turned. If you haven't had the opportunity to read The Salmon Of Doubt then it probably belongs on what I'm guessing is your already impossibly long list :)

That is an excellent Adam's favourite quote! I could go to my bookshelf, take down the right book and find it in context with hardly an effort at all :) I don't have one that springs to mind, too many choices. If I do find a temporal favourite, you know I'll share it.

(on to your original "part two" of this particular, supposedly single message which actually flows and blurs with all the amazing and wonderful journeys you've taken me on in this simple text)

If you enjoyed the first three, I would wager that you will enjoy the remaining books. I would agree that they are not as amazing as the first few but they are still very funny.


You can grab the complete edition for under $15 on Amazon. I would also recommend Dirk Gently's Holistic Detective Agency and the Salmon of Doubt. It's a half completed Dirk Gently book with additional writings of Adams what was put together after he passed away.

Five and a half, really.

Salmon of Doubt by Douglas Adams. Specifically, although the entire book is good, the chapter "Is There an Artificial God?" where DNA goes into a talk about God and why it is a artificially constructed idea. Also "Interview, American Atheists" is a good chapter.