We found 7 Reddit comments about Delta Industrial 46-460 12-1/2-Inch Variable-Speed Midi Lathe. Here are the top ones, ranked by their Reddit score. 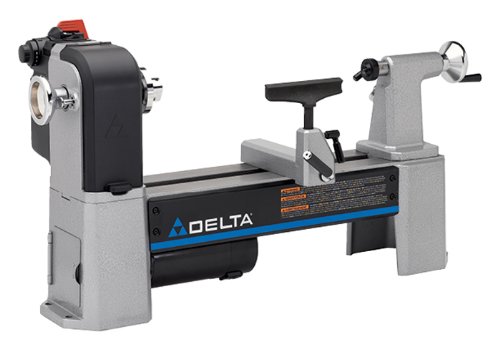 I'm by no means an expert but I'll see if I can help a little.

Rockler has a very simple photo for basic lathe terminology questions. WTR has a visual glossary you might peruse as well.

As for specifics, what sort of turning is he looking to do? If it's just pens and little stuff a good mini lathe is a great place to begin. Rikon has a nice small lathe, actually the one I learned on. It is variable speed, but you have to move the belt which is a bummer. Getting one with electronically variable speeds has been wonderful. Oh and a reverse function is really nice as well. A lot of these features can be added if you are handy.

My current lathe is a Delta Midi. It's a very reliable mid range / mid size lathe with good features. I have the stand (meh) and the extended bed as well for doing longer stuff. Midi's generally run $450-$650ish. I would suggest mounting most midi lathes to a really sturdy bench or something versus most of their stands. They are ok, but aren't heavy enough to minimize movement imo. I weighed mine down with sandbags but it still moves if I have something off round turning. From there you move up to the bigger lathes, the ones with the nice heavy cast iron bases. Here you'll also find swing out heads for doing turning that is really big, you just swing it out to the side so you don't have to worry about the distance to the bed.

My current drool inducing machine is the Laguna Revo. Lots of power, 220, plenty of weight, great controls... But damn if it's not pricey. My brother just bough a Grizzly and he's been very pleased.

I don't see any specs on the site such as HP, speed range, etc, but for not much more you can get a real quality lathe. The Rikons are also a better choice, IMHO, and the lowest one is cheaper than the Turncrafter. I just don't have a lot of faith in Penn State Industries.

Well according to Amazon that lathe (or one that's very similar) is about $600. Just happened to look it up because a friend was thinking about getting into this too. Looks like an impressive start-up cost.

For less than $100 more, you can get a proven performer and 1/2" of additional swing as well:

I'm loving my Delta midi lathe, but there's also a selection of recommended lathes in the turning wiki. I'm sure someone will link the page, before I can figure out how, though this mobile mess.

I think this lathe is the updated version of mine

I've currently only have a Nova bowl chuck and am probably going to end up getting a drill chuck. Looking to do tool handles, maybe pens, table legs, and bowls.

Here's the link, but as /u/jfoobar said the sale is over - hopefully it will be back again soon because it is a hell of a deal.