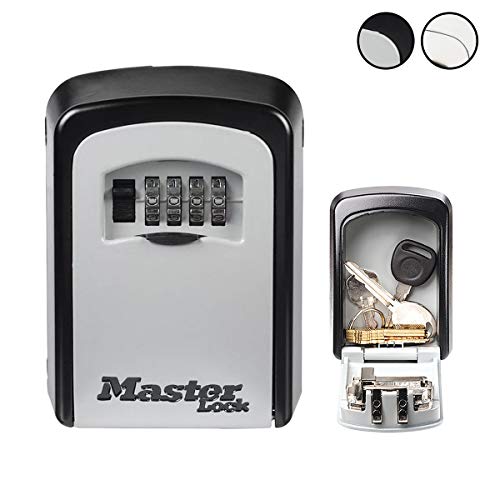 Have you thought about putting up a key safe?

I've got one of these lockboxes attached to an exterior wall but slightly tucked away not in direct eyeline, and shielded from general view by plants.
You can manually change the code as often or as infrequently as you like, and either have it stored as part of the check-in instructions that get sent out a few days before arrival, or you can text it out yourself.
My personal opinion is having 2 keysafes, and 2 separate keys, increases the likelihood of 1 key being left behind or lost or put back in the wrong place. Keep it as simple as possible to minimise user error!

Behind the bar at the local was my first though too (in an envelope with their name on it).

Failing that, something like this. Or just hide them somewhere.

Sounds even more like my MiL - who is also a private tenant in a 'independent living' small block of flats run by a private group. She has a little in savings, from selling a very small house in a not particularly affluent area. This money means that Social Services will back off, effectively walk away if they can be persuaded, or can persuade themselves, that the client is 'safe'.

Getting onto an LA or HA waiting list depends quite a lot on SS assessments, and also the 'need' and availability. If a place has x-places for people with dementia they won't take any more until one tenant moves on. Same with other 'disabilities', because they're meant to provide care for a whole range of elderly (over age 55) needs. As an example, my MiL is on a waiting list, she knows she's on a waiting list, will never know that she will never get to the top of that waiting list because a) her Alzheimer's is now 'too bad' and b) she is still self-funded - so SS put her to, and keep her at, the bottom of the list. We don't actually think she'd cope with a move to a new flat, would forget where everything is and would end up in even more of a muddle than she is now.

We have carers every morning, to make sure she takes her medication and to do any other tasks she wants doing including helping her bathe. She complains that they sit and drink tea, but will not ask them to get out the vacuum cleaner because she tells them she can do it - but she can't, and won't. She tells them she's had a shower, but doesn't know how to use it. She won't let them do any laundry, and we suspect she's now hiding dirty clothes from us because there's never anything to bring away when we visit at the weekend. We had arranged a cleaner, but she got rid of her and they won't respond to messages from us, so goodness knows what she did to them.

The care package needs regular updating, probably every few weeks as we lurch from one small crisis to another. It's quite a challenge to get it right, especially when there's resistance from her. The carers let themselves in, using a key coded key safe a bit like this one https://www.amazon.co.uk/Medium-key-lock-Select-Access/dp/B000JTIX3S/ref=sr_1_5/257-2221811-7083553?ie=UTF8&amp;amp;qid=1518829535&amp;amp;sr=8-5&amp;amp;keywords=key+safes

Your chemist sounds amazing. That arrangement wouldn't work for us because my MiL doesn't know where the chemists is, even though it's less than 500 yards from her front door. She can't cross roads safely and won't admit to us that she can easily get lost.

Food and shopping - we too were 'told' that she could do her own shopping, and that she did her own shopping where she lived previously. We had to, frequently, do an emergency online shop because she'd phone us to say she'd got nothing to eat or drink.

After we moved her to be closer to us (breakdown if relationship between her and the family member she was near, and we're spread out around the country so it was a long distance move) it was clear that she was incapable of shopping on her own. She can't handle money, doesn't know her PIN, and the displays in supermarkets are visually confusing so she hadn't a clue what she was looking at. Writing a list didn't help, because she couldn't work out what was on the list and what was in the trolley. Given the freedom to chose she'd have bought only a small bunch of grapes, a pack of 6 rolls, a small carton of milk, and a pack of ham - for a week. Plus, of course, a few random things that she'd accuse 'somebody' of putting into the trolley - things she'd picked up because they looked pretty, but didn't then recall ever seeing them before. I managed, for a while, to persuade her to buy things to cook but the whole lot ended up being stuffed in the freezer because she cannot actually cope with using a cooker. She can still, just about, manage to use a kettle to make a cup of tea.

She now has meals on wheels, from Apetito, and also a teatime pack. https://www.apetito.co.uk/ It isn't brilliant food, by our standards, but it's there every day and means she gets a hot meal at lunchtime. The driver has the key safe code, so lets themself in.

She also goes, twice or three times a week depending on her mood, to a Day Centre where she's given lunch and eats in company - which is truly a blessing because it gives her the social interaction she wouldn't otherwise have.

We have, or should I say my husband and his siblings have, chosen not to take out the welfare POA because doing so takes pressure off the medical services and puts it squarely in their laps instead. It's also, according to the solicitor, quite hard to get these days.

All this seems like 'comparing notes', but I'm hoping there might be something useful in here for you and your Dad.