We found 12 Reddit comments about The Klingon Hamlet. Here are the top ones, ranked by their Reddit score. 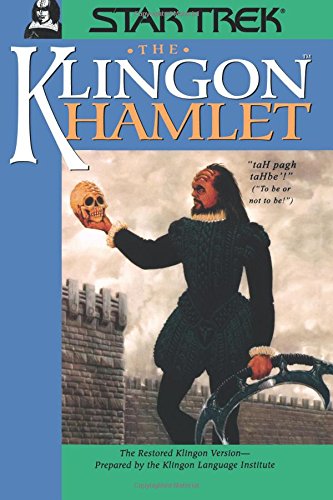 I mean, the media seems really fascinated by the notion that there are a bunch of nerds running around speaking some fictional nerd language (hence the portrayal of such in shows like The Big Bang Theory), but it just doesn't make any sense. Yes, Klingon is a fully realized language constructed by a real-ass linguist and all that, but all that means is that it takes just as much time and effort to learn as a real language, and without the benefit of being able to find any real level of immersion (the snippets of Klingon in the show certainly aren't enough, so you're pretty much stuck with reading Hamlet in Klingon). And anyone who's devoting all those hundreds or thousands of hours to learning a fictional language, as opposed to the many actual useful skills or languages that a nerd could learn in that same amount of time, probably isn't getting outside enough for you to ever actually meet them.

I would love to write some full works of fiction in my conlang. It will be hard work, and only maybe four people will appreciate it, but it'd be fun, I think.

Unfortunately, it's super impractical since it was designed for Star Trek and most words have to do with battle and space/technology. The Klingon Language Institute (apparently this is a real thing) might be helpful. Here's a cd, but there's also The Klingon Hamlet, Klingon for the Galactic Traveler, and The Klingon Dictionary

To really enjoy it you need to read it in the original Klingon.

Are we playing the "is X real" game now? What are you stumped about?

The rule is easy. If it corresponds to a real phenomena/event/behavior etc. it is real.

So for example the Klingon language is real. It has been codified, there are real people who can speak said language. So is Tolkien's form of elvish - Quenya. It does not get any more real for a language than two people meeting face to face and being able to communicate in said language does it?

If it is just a "name" in a book without any structure or without means for real people to actually use the language to communicate, I would argue that they are not "real languages". They are "real" in the context that someone has written them down and they can be referenced in reality by different people. They are not real languages though because you are unable to do any actual communication with them.

Need to have Hamlet translated to truly be making progress. That's when we knew the Klingon language had truly gained worldwide acceptance.

You have not experienced Shakespeare until you have read him in the original Klingon.

Not quite as hard core as you have done, but I actually do like it when an author forces you to learn a language as the story goes on. Shogun is an example of this, where both you and the British protagonist have to learn Japanese to get by. The mini-series did this too a bit.

I have done what you did though with this book. Prepare to roll your eyes!