Reddit reviews Daring Greatly: How the Courage to Be Vulnerable Transforms the Way We Live, Love, Parent, and Lead

We found 18 Reddit comments about Daring Greatly: How the Courage to Be Vulnerable Transforms the Way We Live, Love, Parent, and Lead. Here are the top ones, ranked by their Reddit score. 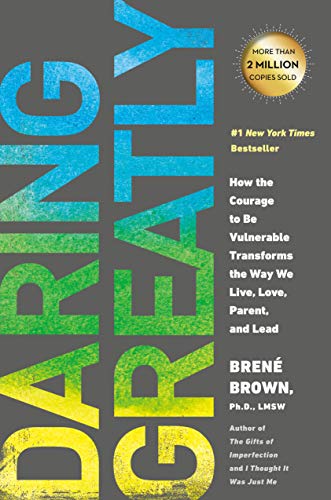 Daring Greatly: How the Courage to Be Vulnerable Transforms the Way We Live, Love, Parent, and Lead
Check price on Amazon

18 Reddit comments about Daring Greatly: How the Courage to Be Vulnerable Transforms the Way We Live, Love, Parent, and Lead:

IMO, the best way to start drawing is with a pad of unlined paper and mechanical pencil.

But if you want software: GIMP is free (yay), Photoshop is the well-known standard (and these videos are good), PaintToolSai feels more natural to draw with, and I just started using Mischief (which has a natural drawing feel, infinite canvas, and vector-based). My recommendation is Sai, since it's cheap, easy, and fun to use.

To learn how to draw people, start working through the Loomis books, beginning with Fun with a Pencil. A classic for learning how to 'see' like an artist is Drawing on the Right Side of the Brain. And when you start to feel frustrated with your work, turn to Art &amp; Fear and Daring Greatly.

Let me know if you have any questions, and good luck with your art journey :)

/u/wizardwithay's comment reminded me of a great line from the book Daring Greatly: Don't try to win over the haters... you are not a jack ass whisperer.

Perhaps feminism can start by not rhetorically labeling our issues for us in a way that forwards their own male-negative, female-positive lexicon.

Counter Edit: I am not "assuming" anything. I know what the term refers to. I take issue with the label that is used to describe it because of the way it operates in language, not the idea. It is the same general idea that feminists use to argue against phrases like "Don't be a Pussy!"

&gt;Women are not the people imposing these things, they're not insulting themselves by comparing men to women.

I would ask you to read the book Daring Greatly by Brene Brown, probably mostly famous for her TED Talks about Vulnerability and Shame. She is a feminist with her Masters in social work and in her book she tackles this issue. She admits through an anecdote at a book signing that she believed that men did not really suffer all that much from shame. After a conversation she had with a man in a red sweater talking about the expectations that his wife and daughters put on him she claims to have had her eyes opened a bit. Previous to this moment, her research had only been focused on women, but when she started to look at men she found shame affected them as well and it wasn't just pressure from the boys. There were women who put pressure on them to conform to their male roles as well. In the book she has another anecdote about when she realized this and realizes that she herself has put that kind of pressure on others and thinks "Holy shit, I am the Patriarchy!" (Which is another word I dislike for linguistic reasons, but that's neither here nor there.)

I'm not here to argue whether or not men are encultured more by men or women or who serves harsher social punishment, but we need to realize that men and women are hurt by themselves and the other, and helped by themselves and the other. Instead of constructing a one sided academic language and environment that is toxic to fight toxicity there needs to be a forum created where people can actually listen to each other.

I've been struggling with vulnerability for a few months now, partly thanks to my readings on gender and gender expectations. One interesting book I've found on the subject is Daring greatly by the wonderful Brene Brown. She has done a lot of research on shame and the trauma it causes, and the one thing she has found to work best against shame is vulnerability itself. She describes ways we can strive to be shame-resilient and to be vulnerable even as people ridicule us for it. If we want to make a change for men, I believe we will need to do it ourselves. For our own sake. In any case, I don't feel comfortable waiting on others to fix my life for me -- it may be a gender expectation of males, but I want to feel empowered and in control. Women will change, but I'm not waiting.

This is what you want, as suggested in the sidebar: http://www.amazon.com/Daring-Greatly-Courage-Vulnerable-Transforms/dp/1592407331/

Ohhh me too - I am ferociously, pathologically, self-sufficient

I'm included to agree with chillchoc. I'd say that the "character" is you. Maybe it's you expressing the way you'd like to be. One could probably make an argument that any behavior someone makes is the 'real them' at some level.

To me (and it very well might not be the case), it sounds more like that what you consider "out of character" is you dropping your defenses (silly, sarcastic, snarky, sardonic) and expressing your vulnerabilities to others. I think that's hard for pretty much everyone and requires a lot of trust. I'm certainly not good at it. But it's still only a part of what makes you, you.

I've been reading a book lately that somewhat relates to this. You might find it interesting. Your library probably has a copy.

I don't think it's bad to be prepared, but every one of those 'what if's is negative. Your future is almost certainly not going to be that bleak, so why keep tormenting yourself about how you might fail? Isn't the opposite just as possible?

Good luck with your classes! It probably won't be as bad as it feels it will.

If I may make a recommendation for some reading, there are three very good books that may apply here.

It is challenging me to change in such hard and amazing ways.

If it helps, I'm in the same boat as you. :) And from what I've been told, it's normal to be feeling confused and overwhelmed while in your 20s and still learning who you are.

Also, I recently read Daring Greatly and it seemed to help me feel less overwhelmed by life. If you happen to be in a bookstore, I'd suggest thumbing through it and seeing if it also looks applicable to your life.

I'm a little late to this thread but still thought I'd throw in my opinions. First i think its always interesting how we tend to internalize the comments/criticisms of strangers or friends. We take what they say to heart and it eats us up inside. but then we brush off the encouraging comments from significant others/family/CLOSE friends. We tend to cover their comments by saying "well he's my husband. he's suppose to say that." If you take a step back and really look at that situation its a little weird right? We take to heart the comments from people who dont matter to us but brush off the comments from the people who really do matter in our lives. So first and foremost i would encourage you to really try to recognize that. Value the opinions and comments from that small inner circle you have (significant others/family/CLOSE FRIENDS). You shouldnt brush them off by saying "well they're suppose to say that". lean on those comments and cherish them.

secondly, it seems like you are looking for someone to just say the right things or give you the magic formula on how to live a happier life. Well there isnt some magic formula. no secrets and nothing an individual can SAY that will change the course of your life. it all come back to you and the actions you take. or i should say actions/inaction. you have to make the steps to change the course of your life. whether those steps are going to therapy, walking over to those parents at the library and just saying "hello", or embracing the comments from your husband, these all depend on you. you have to take these initial steps. no one will take them for you.

thirdly, you asked for some book recommendations. I would suggest watching this TED talk by Brene Brown: https://www.youtube.com/watch?v=iCvmsMzlF7o

good luck and wish you the best!

This advice is good but I think you sound like you really want to learn about what to do. Check out this book on vulnerability by Brene Brown - Daring Greatly.

She also has one of the most popular TED talks out there about the same subject. Here it is

Daring Greatly talks a lot about vulnerability from a shame researcher. In part its about the importance of being open with other people, so we could all probably use the advice here

Super amazing book so far, and it's already helped me tremendously with my personal relationships and especially my relationship with myself. My view on things and my anxiety due to obscene small things has always left me with feeling shameful for not being "normal." My personality in my "older" age compared to when I was a teenager has changed dramatically and I generally jumped to anger (putting up a wall) instead of embracing the sadness and working through it (vulnerability). This book has helped me in so many ways, and sometimes all we need is just a different perspective in life. A motivational and hopeful perspective - and this book gave me that! :) There are so many more things this book has given me, but I wanted to share a small experience.

Oh gosh this is like impossible. I WANT ALL THE THINGSSS!! But I suppose this one is one of my top wants right now. Although, I have a feeling you're looking more for a fiction novel than a non-fiction self help book. lol Thanks for the contest :)

While this may not directly solve your problem, I think this is what you are striving for in it.

Daring Greatly is awesome, that is at least a start. Brene Brown (the author) has a great TED talk that can act as a primer.